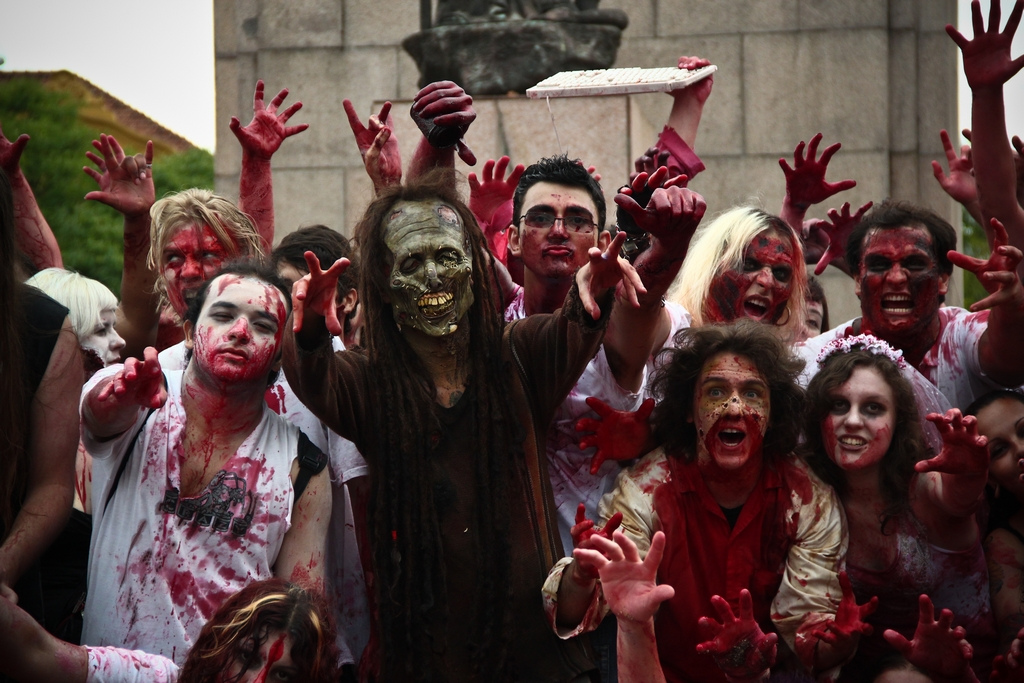 The Undead and Us

Zombies speak to our perennial anxieties about war, pandemics, and globalization.
By John Feffer | November 13, 2013

I thought it was a fad, and it would die out. Three years ago I read Daniel Drezner’s piece in Foreign Policy about his search for an “international relations theory of zombies,” which he subsequently expanded into a full-length book. Really, this was on the order of devoting an entire university class to the lyrics of Madonna. If I just pretended that zombies didn’t exist, they would go away.

I was wrong. Zombies don’t die, and neither does our fascination with them.

Drezner’s piece came out, I thought, at the apogee of zombie fascination. But since then, we’ve been treated to the Brad Pitt vehicle World War Z, the hit TV show The Walking Dead, the video game Pride and Prejudice and Zombies (previously a parody novel, graphic novel, and soon to be a movie), the literary novel Zone One by Colson Whitehead, and much, much more. We seem to have an unquenchable desire for zombification.

All this leaves the unanswered question: why? Yes, I know, we’ve been fascinated with vampires and ghosts and aliens and the Loch Ness monster for ages. But why zombies, and why now? Here are some conventional explanations:

1) Success sells: It doesn’t matter what the “it” is; if people want some, they must want more. If suddenly philately became hot, George Clooney would star in Going Postal and there’d be a graphic novel series called Sense and Sensibility and Stamp Collecting. Aristotle said: everything in moderation. But who listens to Aristotle any more? Certainly not Hollywood.

2) It’s all about the apocalypse: We’ve been worried about the world ending ever since the Mayans and the Book of Revelations. Nuclear holocaust has faded from the collective unconscious, and zombies are the new blackout.

3) Freud reminded us, as if we needed such a reminder, that it’s all about sex and death. Vampires satisfy the former fixation, zombies the latter. We knock back a shot of eros from Anne Rice and the Twilight series, and then we follow it up with a chaser of thanatos from Max Brooks and The Returned.

Those are all good explanations. But I’m interested, like Drezner, in the foreign policy implications of zombies. Unlike Drezner, however, I don’t care about using zombies to explore the intricacies of international relations theory. I’m more concerned with how changes in world politics trickle down into our culture. Our dreams represent our anxieties about what’s happening in our lives. Our culture represents our anxieties about what’s happening in our world.

Take the Invasion of the Body Snatchers, a film that came out in 1956, at the peak of anti-Communist hysteria in the United States. In the movie, aliens have quietly arrived in California, where they set about conquering the world by creating identical replicas of people minus their individuality. Few people take the menace seriously. As allegories go, I doubt the filmmakers were channeling their fears of Allen Ginsberg and the Beats taking over San Francisco (Howl also came out in 1956). Surely the movie struck a chord with audiences because of the Cold War McCarthyist environment in which it was produced.

Zombies have a relatively recent provenance in American culture compared to witches or vampires. They came to the United States via the voodoo cults of Haiti, themselves an import from West Africa. The first zombie movie came out in the 1930s, and EC Comics nurtured the zombie meme in its comic books in the 1950s. The undead enjoyed a revival with the infamous Night of the Living Dead, the 1968 horror flick by George Romero. Since then, it’s been a steady increase in zombie and zombie-like films, with a significant spike after 2000.

It’s this tremendous increase over the last decade that really interests me. I attribute the huge bump to the intersection of three trends: war, pandemics, and globalization.

First and foremost, zombie books and movies are all about war: them versus us. In retrospect, it seems as if we’ve been fighting zombies for ages. From World War II on, our war films have depicted courageous individuals facing down the faceless hordes. In Bataan (1943), Robert Taylor ends the film behind a machine gun, confronting an endless wave of Japanese soldiers. The million-man Chinese volunteer army that bailed out the North Koreans during the Korean War was frequently presented as a “horde” of combatants that just kept coming. The Vietcong were similarly relentless and seemingly ineradicable. And in both wars, U.S. soldiers and TV viewers faced a bewildering situation in which our allies suddenly became our enemies—South Vietnamese into North Vietnamese, South Koreans into North Korans—after some inexplicable “infection” addled their brains. Of course, to those folks American soldiers were the inscrutable invaders, plodding zombie-like into their lives.

Wars coincide with an uptick in zombie movies, and never more obviously than after September 11. Al-Qaeda and its suicide bombers presented another adversary with a cult of death supposedly different from our own. Attacked for the first time since Pearl Harbor, America imagined itself surrounded by enemies. Even though the homeland was not in fact surrounded, the Bush administration put American troops into situations—Afghanistan, Iraq—in which they truly were surrounded.

In Zone One, the main characters of Colson Whitehead’s novel are working in a sweeper unit deployed to clear lower Manhattan of any remaining zombies so that the wealthy can repopulate the area. The army units occupy what seems very much like the Green Zone in Baghdad in the aftermath of the Iraq War. They don’t dare go beyond the walled confines of their Emerald City, and they are under constant fear of breach. Like America’s wars of the 21st century, it doesn’t look like it will end well.

But wars, for lucky Americans, remain “out there.” What cuts much closer to home are pandemics: AIDS, SARS, MRSA, and their acronym kin. Pandemics, like the Spanish flu, often come in the wake of war, as soldiers return home to spread new and potent viruses. The horror of disease is that viruses and bacteria are indiscriminate guests: they don’t care who hosts them. Our next-door neighbor, such a friendly fellow when it comes to lending a lawnmower or a stepladder, can turn out to be a deadly vector. And what about that guy hacking on the Metro, or that lady sneezing into the broccoli in the produce section of our supermarket? The epidemiologists keep warning us that a deadly mutation of avian flu is just around the corner, waiting for the next flight to your hometown.

But perhaps our greatest anxieties in the United States are reserved for globalization and the technologies associated with it. Yes, wars are terrible, but they claim only a very small percentage of our population. Pandemics are a potential threat, but we can pretend that the Center for Disease Control is on top of things. But globalization is a fact. Our fascination with zombies is partly a transposed fear of immigration (which the departed Ugly Americans series riffed on), of China displacing the United States as the world’s top economy, of bots taking over our computers, of financial markets that can melt down in a single morning. Zombies overwhelm local control, state control, national control, and ultimately international control. Like globalization, they are an uncontainable and voracious force. Civilization coats our world with the thinnest possible veneer—think Yugoslavia circa 1992—and we know how quickly it can be rubbed away.

The latest zombie blockbuster, World War Z, braids these three themes of war, pandemics, and globalization into a paean for liberal internationalism. Brad Pitt plays a former UN employee who has operated successfully in some of the most dangerous areas of the world. When the zombie epidemic breaks out, he deploys his old skills to save his family. There are only two countries in the world that seem to have staved off the zombie attacks: North Korea (because the regime pulled out the teeth of the entire population within 24 hours of infection) and Israel (which erected an enormous wall). On an aircraft carrier in the middle of the ocean, a deputy UN secretary general and a naval commander are the only authority left, and they enlist Pitt on a mission to find the source of the plague.

It’s reassuring that the UN plays a heroic role in a blockbuster, after serving as the villain of the entire Left Behind series. The effort to erect walls doesn’t work, for walls will always be breached. The military creates little garrisons, but it too cannot defeat the zombies. Instead, it’s a UN staffer using his noggin who saves the day, along with World Health Organization officials. I suspect that Angelina Jolie, who worked for years on refugees for the UNHCR, has had some influence on this internationalist transformation of the Max Brooks novel, which was considerably darker and more polyglot. Still, when was the last popular film in which a global bureaucracy triumphed where the firepower of the military proved insufficient? Maybe this film can be persuasive with the “black helicopters” crowd.

Of course, World War Z ends with Brad Pitt intoning, “Our war has just begun.” He’s probably right, and not just about the likelihood of a sequel. The undead keep coming back, like a bad dream or a fad that keeps lurching forward.