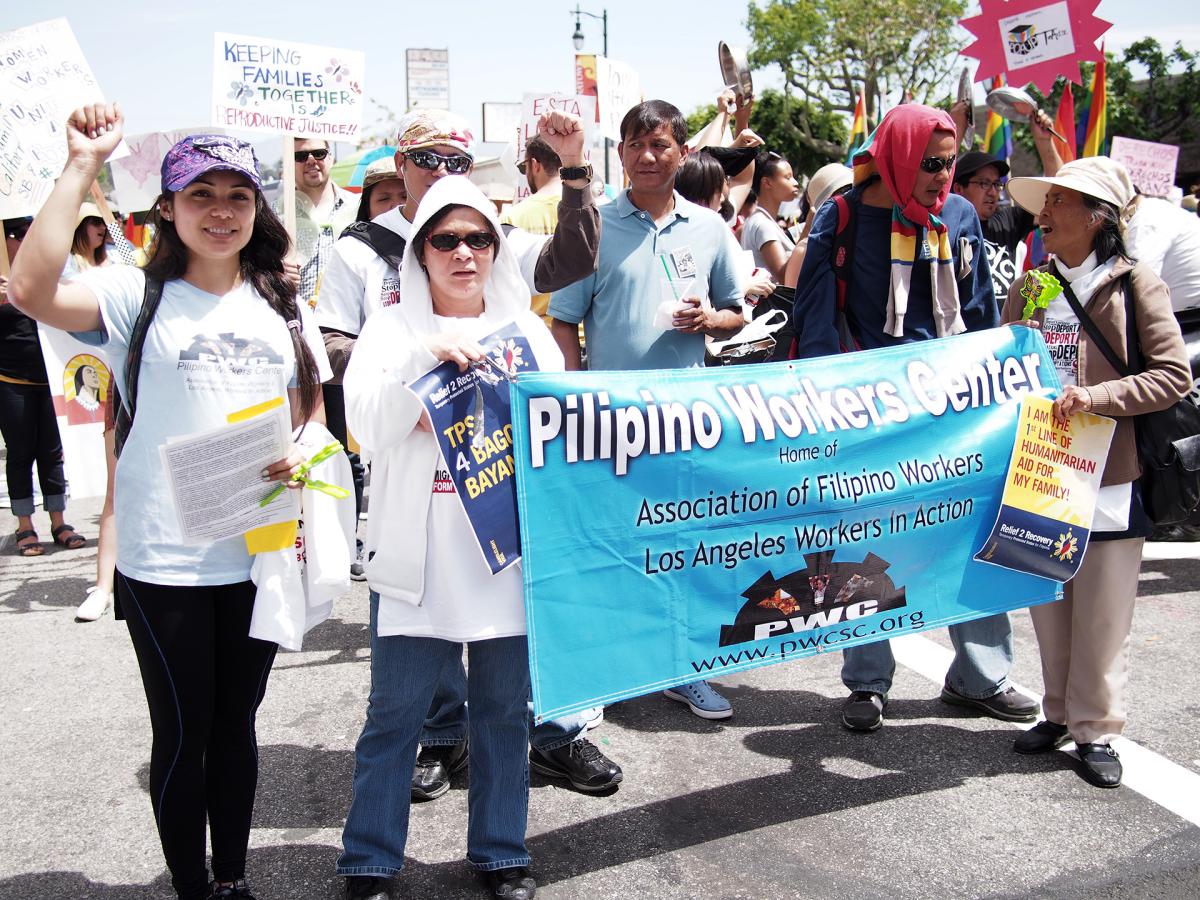 Undocumented Filipinos Are Living a Special Nightmare in Trump’s America

Under fire from Washington, rejected by Manila, and overlooked by many Americans, undocumented Filipinos are linking arms with others in the anti-Trump resistance.
By Alyssa Aquino | March 10, 2017

In it, two people — Lolita Lledo, an immigrants rights activist, and Steve Angeles, a reporter — are making rounds in a Los Angeles neighborhood. Lledo has of late been bombarded with rumors of immigration officers poking around local businesses. To keep the hysteria at bay, the two have been investigating the claims.

Lledo’s organization is erring on the side of caution — a day later they run a “know your rights” workshop for locals. Someone posts a picture on Facebook, grabbing only the backs of participants so that it’s a sea of black hair. “Standing room and fully-packed,” the caption reads.

Lledo has a reason to be on-edge. Recently, headline-grabbing ICE raids were carried out on Asian-American communities like theirs.

Yes, Asian communities. Lledo and Angeles are Filipino-American — or Fil-Am, as many in the community shorten it.

Donald Trump distinguished himself last year by calling Mexicans rapists and vowing to build a wall along the southern border. Elected into office, he ante-ed up on the anti-Mexican demagoguery with a travel ban on Arab and African Muslim travelers. But promises to end undocumented immigration target so-called “model minorities” too.

According to American governmental agencies, there were 2.1 million Filipino immigrants in 2015, making it the fourth largest immigrant community in the U.S. The Commission of Filipinos Overseas, an agency of the Philippine government, pegs the number even higher, at 3.5 million.

The number of undocumented Filipinos, or TNTs — for tago ng tago, literally “in perpetual hiding” — is also in contention. The Department of Homeland Security places the number at 310,000, but other estimates range as high as 800,000.

But how did this many people get here? Better yet, why are there so many Filipinos on this side of the Pacific? The answer is partly historical: The Philippines used to be a colony of the United States (though the “used to be” is also in contention).

Filipino migration to the U.S. first began after the country was passed from Spanish hands to American ones around the turn of the 20th century. Filipino workers were lured over to Hawaii and California with promises of good jobs in the agricultural industry.

The jobs weren’t that great, it turned out, but Hawaii and California were apparently worth writing home about — they’re still home to the highest number of Filipino immigrants among U.S. states. Los Angeles alone has 250,000 Filipinos.

Then the Great Depression hit and immigration stopped. Nativists complained that too many Filipinos — who were then American nationals — were taking too many not-so-great jobs. Quietly, U.S. authorities gave the Philippines commonwealth status and promised independence in 1945, and those Filipino-American nationals were reclassified as aliens.

The end of World War II saw another wave of immigration. Anywhere from 100,000 to 250,000 Filipino servicemen were promised American citizenship for fighting the Japanese. That didn’t happen, but Filipina war brides and health care workers did make it to the U.S., racking up the numbers of Fil-Ams by the thousands

The Immigration and Nationality Act of 1965, which loosened long-standing restrictions on immigration from Asia, changed things again, leading to a robust Fil-Am community that today numbers in the millions.

Between Trump and Duterte

On the other side of the Pacific, Trump’s tough talk on immigration is worrying Filipinos, many of whom rely on remittances from family members who work abroad. But one Philippine leader who doesn’t seem concerned is the country’s hardline president, Rodrigo Duterte — sometimes likened to a “Philippine Trump.”

Regardless — or maybe because — of their oft-noted bromance, Duterte has proved unwilling to capitalize on being one of the few international leaders friendly with Trump to help Filipinos in the United States. Instead, he’s pushing a line on immigration as hard as his one on drugs: “If you are caught and deported,” Duterte said of Filipinos overseas, “I will not lift a finger.”

His vow of non-interference drew critique from both sides of the Pacific. Aside from concern about the sizable Filipino community within the U.S., many Filipinos rely on the Fil-Ams. In 2015, remittances to the Philippines accounted for over 10 percent of the country’s GDP — and nearly half of that came from the United States. Even that number likely doesn’t account for money transfers through informal channels.

For now, Filipino immigrant organizations across the U.S. have been organizing. Abandoned by Manila and targeted by Washington, they’re joining forces with everyone else under attack from the Trump administration.

In a Long Beach rally directly after the Muslim ban was put in place, Nikole Kababa of the Filipino Migrants Center spoke. “Solidarity is our weapon,” she said. “A weapon against hate, a weapon against an administration that is going to unleash more attacks.”

Alyssa Aquino is a Next Leader at the Institute for Policy Studies.