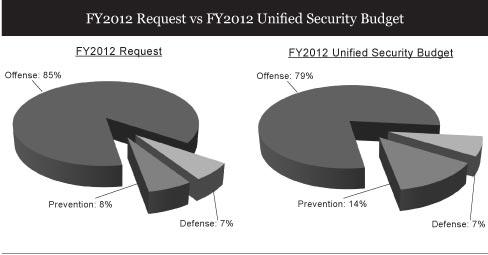 With military cuts now on the negotiating table, here's a set of expert recommendations on what to cut and yet keep us safe and secure.
By Lawrence Korb, Miriam Pemberton | June 30, 2011

Two of 2011’s most extraordinary developments point in a single direction. 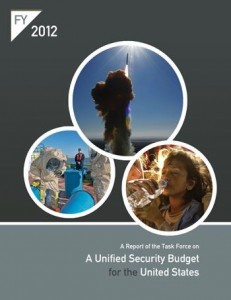 First, the death of Osama bin Laden was accomplished by means that resembled a police action. A painstaking investigation preceded the operation by a group of special forces roughly the size of a SWAT team. Then came the extensive diplomatic work to improve the critical, complex, and challenging relationship between the United States and Pakistan. The 150,000 U.S. troops amassed in neighboring countries at the time had remarkably little to do with it. The decade of war the United States launched in response to the 9/11 attacks, at the cost of a trillion-plus dollars and many thousands of lives, has failed to accomplish a goal that was finally achieved at a tiny fraction of these costs, through a coordinated action of investigative work, diplomacy, and minimal military force.

And second, the various ongoing, transformational struggles known as the Arab Spring point to the possibilities of peaceful change in which the United States has sought to play a supporting role and to deemphasize the role of its military forces.

Since 2004, the Unified Security Task Force has made the case for a rebalancing of United States security resources among the accounts funding offense (military forces), defense (homeland security), and prevention (non-military international engagement). The goal is to strengthen our capacity to prevent and resolve conflict by non-military means, and to constrain terrorist threats not by waging a “war on terror” but by finding and isolating terrorists and bringing them to justice, protecting ourselves from future attacks, and strengthening the capacity of the United States and other nations to resist terrorism.

Our top military and civilian national security leaders have all expressed support for repairing the extreme imbalance in our security spending to strengthen our non-military security tools. Their actions to get it done, however, have mostly lagged behind these fine words. 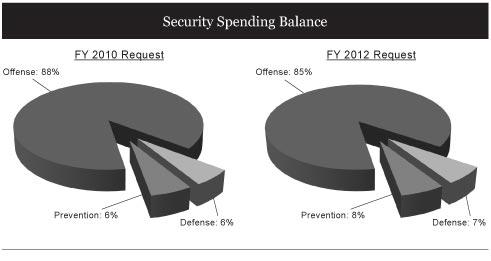 The historic changes of 2011 have provided fresh evidence of why this repair is needed.

But achieving it will not be easy.

The single-minded focus of national debate on deficit reduction during the past year has held the most promise of ending the unbroken string of expanded military accounts that has dominated U.S. discretionary spending in this century.1 Calls for deficit reduction plans that put “everything on the table — including defense” have crossed an otherwise gaping political divide.

The Unified Security Budget project has contributed to this debate by outlining a set of cuts in unneeded military programs that formed the core of a proposal by the Sustainable Defense Task Force for $1 trillion in cuts over 10 years.2 A majority, though not a supermajority, of the members of the President’s Commission on Fiscal Responsibility and Reform adopted the annualized figure of $100 billion, and many of the recommendations from this proposal.

Unfortunately, this administration did not follow its own commission’s recommendations. Its flurry of claims this year about past and future military savings, closely inspected, leave us with plans for a military budget that continues to more than keep pace with inflation. It will not contribute significantly to deficit reduction.

Yet the Obama administration did improve the security balance modestly with its FY 2012 request.

It did this not by actually reducing military spending — again, Pentagon smoke and mirrors to the contrary, military growth remains on track, only at a slower rate. The rebalancing came from a boost in the allocation for international affairs. Homeland security spending stayed relatively constant. 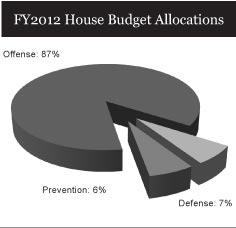 Two problems burden this rebalancing. First, the increase in the international affairs budget is mostly attributable to increased State Department responsibilities for operations in Iraq, rather than in strengthening State Department capacity to prevent conflict. The nominal increase to the administration’s prevention budget request comes almost entirely from its budget for Overseas Contingency Operations (OCOs). Indeed the improvement in the security balance itself is almost entirely attributable to the drop in OCO funding for the military and the increase in its funding slated for the State Department.

The second and more serious problem is that the rebalancing outlined in the administration’s request will not actually occur. Congressional action in 2011 on this budget is quite clearly headed in the direction of reversing the gains embodied in President Obama’s request.>

This unbalancing trend would have been worse but for the presence of funding for OCOs in the State Department’s budget. Congressional action this year has consistently slashed the regular budget for international affairs while fully funding the OCO account.

Indeed, the narrowing of the focus of budget negotiations onto deficit reduction had a clear effect on the administration’s own planning for the security balance in future years. As shown in Figures 1 and 2, pages 12 and 13, the administration’s FY 2011 budget request laid out five- and 10-year plans that envisioned substantial rebalancing. By the time of the FY 2012 request, these plans had been drastically revised, and the rebalancing had vanished. 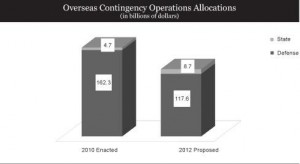 In one year, the budget planners had cut an additional $230 billion from the five-year projected increase for the Defense Department. But they had cut a cumulative $129 billion from International Affairs. (The Homeland Security budget took a much smaller $57 billion hit.) The budget for offense declined, in nominal terms, over that five-year period, by a total of 1.8 percent; the prevention budget declines by 18.2 percent.These facts of life in the world of deficit reduction had an impact on our own recommendations for rebalancing. We have argued that a unified security budget would allow the overall balance to be clear, facilitating the process of reallocation. In the meantime, we have provided an annual proposal for such a budget and of the reallocations that would substantially alter the balance.In previous years, we have recommended more ambitious resource shifts toward non-military security tools. This year’s budget politics have led us to scale back these ambitions. Our budget, page 18, would cut $77.1 billion from the FY 2012 request for unneeded military programs, while adding $28.1 billion to investments in defense and prevention. While we have slightly increased our recommendations for military cuts over previous years, we have viewed fully funding, or slightly increasing, the Obama administration’s request as more realistic goals for the defense and prevention accounts.

The exception to this rule is spending on alternative energy. The Defense Department is focusing increasing attention on climate change as a security threat. The concentration of extreme weather events this year underscores their concerns. And a faltering economic recovery affirms the need for job-creating investment. For all these reasons, we recommend investing the lion’s share of the increases to the prevention budget to the portion of this budget that will address this threat while spurring domestic economic activity.

Our Unified Security Budget would improve the security balance, as illustrated in the chart below.

The difference between our recommended cuts and additions would leave a remainder of nearly $50 billion. We recommend that half of that be allocated to deficit reduction. But our country suffers from an investment deficit as well as a budget deficit. We therefore recommend reallocating the rest to job-creating public investment, which would itself create new taxpayers and new revenue, thereby contributing to deficit reduction.

It is thus possible to improve the balance of our security spending portfolio while also cutting the deficit. But that is impossible if the budget for offense is protected at the expense of the prevention budget and investment in the nation’s infrastructure.

Congress so far continues to pursue this course. It is, however, resisting the tide that has shifted the debate this year strongly in the direction of giving military spending a significant role in deficit reduction. So far, however, the Obama administration has gone no further than slowing the growth of a military budget that is larger than at any time since World War II. It has grown since 2001 from one-third of the world’s total to nearly one-half, and will, under this plan, continue to grow in real terms. Deficit reduction requires actually cutting military spending. Three sections of this report outline the three measures necessary to do so.

Getting serious about waste: There is general agreement that military accounts are loaded with fat. The Government Accountability Office found that military cost overruns in the last two years — the difference between what procurement was contracted to cost and what it actually did cost — exceeded the State Department’s annual budget. This section reviews the measures actually taken this year, assesses their results, and outlines what really needs to be done to cut waste.

Roles and missions review: The administration is currently conducting what it claims is an examination of which core missions are necessary to our security and what we can do without. This is a critical task. The growth in the military budget in recent years has coincided with an expanded set of missions that the Pentagon has embraced in its Quadrennial Defense Review (QDR) without regard to cost. This new section gives our recommendations for the kind of review that will be necessary to drive a serious effort to cut costs.

Budget process reform: There is a disconnect between the current discourse on the need for deficit reduction and security budget rebalancing and the bloated, unbalanced budgets that we continue to fund. This disconnect has much to do with a balkanized budget process that favors parochial interests and inhibits consideration of what overall security spending levels and priorities will best serve our national goals. In this section we provide a menu of reforms, from the modest to the visionary, which would move us from one to the other.