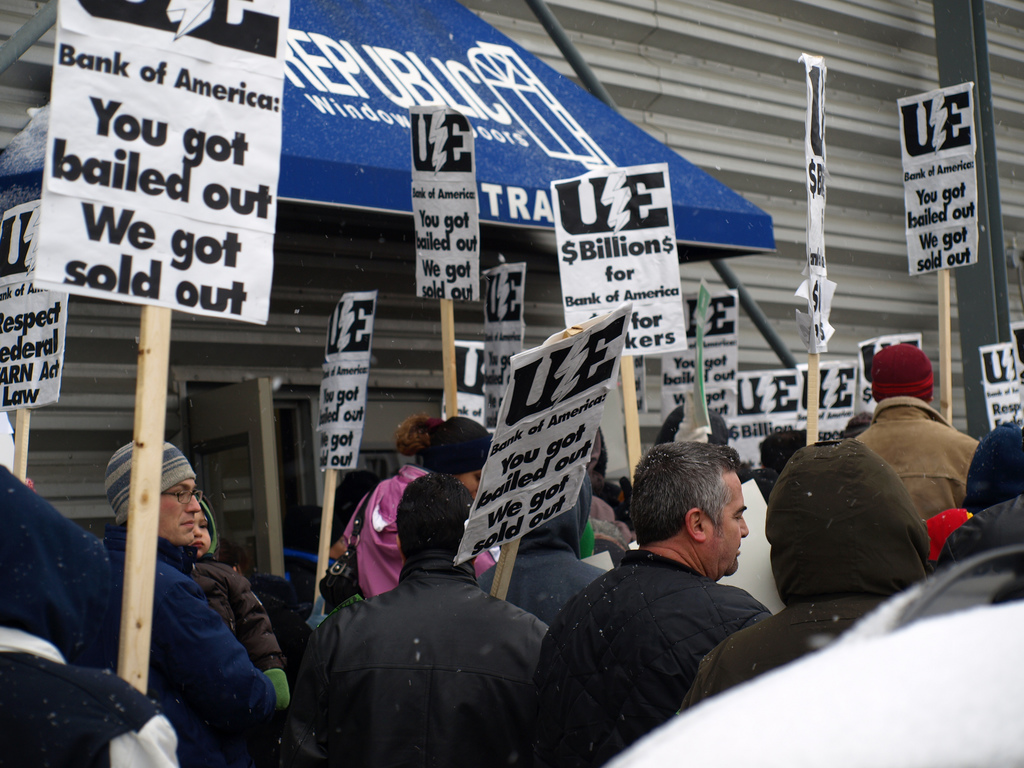 Unions Can Take on International Fights — and Win

Fresh off a strike in Erie, PA, the United Electrical Workers are a model of the working-class internationalism that can build a more just world.
By Michael Galant | March 14, 2019

After nine days of picketing in below freezing temperatures, striking workers in Erie, Pennsylvania returned to work recently under a 90-day agreement.

The 1,700 strong United Electrical, Radio, and Machine Workers of America (UE) strike quickly drew national attention. Senator Bernie Sanders declared his support for the union and even invited the president of the local to speak at his campaign rally. As “the first major U.S. manufacturing strike of the Trump era,” according to The Nation, Erie brought renewed focus to the struggles of American industrial workers who have faced job loss, wage stagnation, and weakened bargaining power as a result of corporate globalization.

But Erie isn’t just a reminder of the problem. It also points us toward the solution.

For decades, UE has been a leading example of global labor solidarity. The union’s commitment to internationalism offers our greatest hope for an alternative to the existing global system.

Since the 1980s, policymakers and the corporate interests that they represent have designed a globalized world that places profit before people and planet. This “neoliberal” global system allows capital, but not people, to move freely across borders. Because corporations can shop around for the most exploitable labor and environmental conditions, countries desperate for investment are pitted against one another in a global “race to the bottom.”

While right-wingers like Donald Trump have tried to paint this as a contest between America and the rest of the world, the true struggle is between capital and the working class, regardless of nation. The key to victory is therefore to unite workers across borders.

UE does just that.

UE was one of the first unions to recognize and respond to the threat of neoliberal globalization. During the run-up to the North American Free Trade Agreement (NAFTA), it built a unique alliance with the Frente Autentico del Trabajo (FAT) of Mexico that has served as an exemplar of transnational labor solidarity ever since. UE and the FAT remain structurally independent but play active roles in each other’s strikes, campaigns, and organizing drives. They exchange rank-and-file members to promote dialogue between countries, launched a joint education center along the U.S.-Mexico border, and have even run mutual fundraising campaigns.

Most innovatively, UE and the FAT have leveraged the NAFTA side accord on labor to pressure each other’s countries on labor legislation. Along with other partners in Mexico and Canada, the FAT submitted a complaint to the Mexican government that North Carolina’s restrictions on public sector collective bargaining violate NAFTA. Though existing trade agreements are far from supportive of workers’ rights, the UE-FAT alliance points to ways to leverage the meager protections that do exist.

UE also recognizes that working class interests go beyond the narrow set of demands that can be won from management at the negotiating table. It played an active role in the multi-issue Global Justice movement, participating in multiple World Social Fora and sitting for some time on the Coordinating Committee for the Grassroots Global Justice Alliance.

Continuing the fight for Global Justice today, UE opposes the Trump administration’s “NAFTA 2.0,” citing not only weak enforcement of labor protections, but also the extension of drug-patent provisions that increase the costs of lifesaving medicine, inadequate reforms of the Investor-State Dispute Settlement mechanism, and lack of protections for women, indigenous communities, and the environment.

In contrast to the AFL-CIO’s dismal, if slightly improving, record, UE has also consistently opposed U.S. imperial ventures abroad. It is an active member of U.S. Labor Against the War, founded in 2003 in response to the invasion of Iraq, has vocally opposed American interference in Venezuela, and was the first national U.S. union to endorse the Boycott, Divestment, and Sanctions campaign against Israel.

While other unions have fallen into the self-defeating trap of responding to neoliberal globalization with a return to nationalist protectionism, UE remains committed to building an alternative internationalist model. The United Steel Workers, for example, welcomed the Trump administration’s decision to implement steel and aluminum tariffs. UE condemned the move: “We are not opposed to tariffs or trade agreements in all circumstances… However, we firmly oppose using them as a cudgel to extract concessions from trading partners and allies, and to bolster corporate profits at the expense of workers’ living standards and the health and safety of our communities.”

UE’s deep commitment to internationalism is worthy of replication. But to do so requires learning another lesson from UE’s record: global solidarity is not dictated — it’s built.

UE does this in many ways. The internationalist perspective is baked into all communications and political education initiatives. Regular collaborative campaigns build solidarity through action. And exchange visits between rank-and-file members encourage relationship-building at the grassroots level.

Recognizing the singular role of immigrants in building global solidarity, UE makes concerted efforts to connect members of partner unions with workers of similar national origin in the United States. In one instance, the visit of an FAT organizer was the deciding factor in the successful unionization of a factory composed mostly of workers of Mexican origin.

UE is not perfect. But its record of solidarity, and the steps that it takes to build that solidarity at the rank-and-file level, are valuable models.

While the strike in Erie is over for now, the wider conditions that led to it — a model of globalization that seeks to divide and conquer the working class — live on. To win that battle will require more than a single strike. It will require the construction of a global movement based in solidarity of the working class and other oppressed groups that transcends borders.

It won’t be easy. But UE’s history of committed internationalism shows us the path forward.

Michael Galant is a recent graduate of the Master of Public Policy program at the Harvard Kennedy School of Government. He is interested in building global solidarity for left alternatives to neoliberal models of globalization and “development,” and can be found on Twitter at @michael_galant