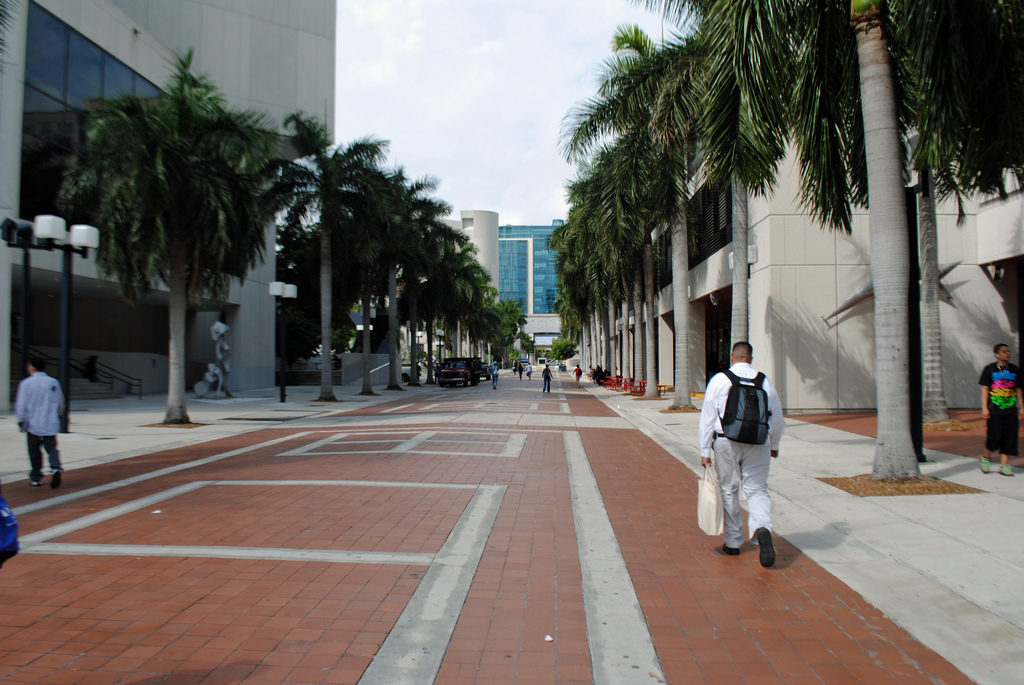 What could have been a positive educational exchange between the United States and Cuba has become an exercise in political ideology. (Photo: Larry Miller / Flickr)

The University is for Counterrevolutionaries

A government-sponsored program to educate visiting Cuban students at U.S. universities has been hijacked by right-wing Cuban-American groups.
By Arturo Lopez-Levy | February 24, 2014

A rapper, a graffiti artist, a blogger, two independent lawyers: In all, 17 students have arrived from Cuba with U.S government-sponsored scholarships to study at Miami Dade College.

Having students from Cuba in the United States is a welcome development. Reforms to Cuba’s migration policy, in place since 2013, now allow Cubans to travel abroad, increasing their access to education, work opportunities, and information. The reform comes on the heels of modest efforts by the Obama administration to expand contacts between the two societies, including issuing more visas and allowing more purposeful travel to the island.

But what could have been a positive educational exchange has become an exercise in political ideology. The right-wing Foundation for Human Rights in Cuba (FHRC) — which runs the selection process — is only accepting students opposed to the Cuban political system. By sticking to that demographic, the program ends up reproducing in the United States the same logic of exclusion applied by the Cuban government to its citizens, in reverse. If a Cuban student wants to come to the United States, he or she essentially has to obtain support from a pro-embargo opposition group.

It should come as no surprise that Cuban exile groups in the United States have extended an invitation to Cuban dissidents — many of whom were excluded from Cuban educational programs due to their political opinions — to study here in the States. Offering them an education in Miami serves as a remedy to that violation of their rights.

But it is important not to equate pro-embargo opposition with Cuban civil society writ large. U.S. government-sponsored educational exchanges between Cuba and the United States should be open to all Cubans, without the kind of political coercion that this program entails. Instead of developing a non-partisan, post-Cold War educational exchange, the U.S. government and the FHRC have expanded the reach of regime-change propaganda in the United States and Cuba alike.

Show Me the Money

The financial backing and selection process for these scholarships speak volumes about the nature of the program. The scholarships are funded by the U.S. Agency for International Development (USAID), which funnels the money through the anti-regime FHRC. FHRC, in turn, is a subsidiary of the Cuban American National Foundation (CANF).

CANF, better known in Cuban-American circles simply as the “Foundation,” received much attention from President Obama during his presidential campaigns. Run by the Mas family, CANF holds truly reactionary views — going so far as to maintain a paramilitary branch to support right-wing radicals involved in terrorist actions against Cuba. These include Luis Posada Carriles and Orlando Bosch, who masterminded the 1976 destruction of an airborne Cuban civilian plane with 73 victims on board.

By supplying dollars to FHRC, the U.S. government is placing student scholarships in the hands of an organization that has supported terrorists.

Not only is the funding an ethical embarrassment — so is the selection process. FHRC and Miami Dade College choose scholarship recipients based on suggestions from Guillermo Fariñas and Berta Soler, two pro-embargo activists living on the island, whom CANF selected as liaisons to recommend Cubans for the fellowships. Both Soler and Fariñas have expressed their extreme biases openly, respectively calling the Batista dictatorship “a little golden cup” and terrorist Posada Carriles “an oppositionist.” It’s an understatement to say that these two don’t constitute optimal staff for selecting students to study abroad, even if the goal is to prevent the Cuban government from sending agents to the United States. If you want to study in the United States, USAID seems to be telling Cubans, you have to buddy up with our favorite Cuban opposition activists.

This is not to say that private money can’t be used for such ends. If Jorge Mas Santos — and the CANF organization he leads — wants to spend his money on scholarships for activists who favor his goals, then that’s his business. But to funnel U.S. taxpayer money toward his pet projects amounts to opportunism, and ultimately harms U.S. foreign policy. It does no service to U.S. values or interests to partner in a public diplomacy program with supporters of terrorists and admirers of the Batista dictatorship.

The scholarship providers claim to be countering Fidel Castro’s misguided slogan that “the university is for revolutionaries” and creating educational opportunities for the Cuban people. But by providing taxpayers dollars to right-wing Cuban-American groups and granting them the power to select scholarship recipients, the United States is essentially implementing Fidel’s slogan in reverse. Under this program, “the university is for counterrevolutionaries.” This has nothing to do with democracy.

The FHRC-Miami Dade educational program takes pride in its slogan “We are all one people.” If that’s true, then the program should not have a partisan character. It should include both pro- and anti-Castro Cubans, as well as those not interested in politics at all.

If the goal is to use the soft power of U.S. universities to convey to Cubans the richness of a democratic education, why restrict the program to students possessing a particular ideology? Why rule against pluralism by putting the program in the hands of individuals with such renowned biases? Rather than subsidize partisan positions, the United States should support the creation of an environment of free thought in and about Cuba.

The U.S. government could create a more politically neutral program by having well-established U.S. institutions grant scholarships to Cubans. A Fulbright-like program for Cuban students would further the U.S. traditions of academic excellence and democracy by selecting beneficiaries not based on political criteria but on academic performance, as well as racial, religious, and regional diversity. The United States has plenty of experience offering robust educational programs to citizens of non-democratic countries, and those programs sponsor thousands of students from all over the world, without imposing any ideological litmus test upon them.

An increase in educational interaction and cultural exchanges between Cuba and the United States will not persuade the two nations to put their political and security concerns aside. But it can ease tensions and win time for the development of new ideas and attitudes — and slowly replace political polarization and acrimony with narratives of peace and reconciliation. A U.S. policy of change by rapprochement must be based on the creation of a community of shared interests and common destiny — not gross partisan manipulation.

Granting U.S. scholarships to Cubans is laudable, and can benefit many by reducing the distance between the Cuban and American peoples. But its implementation is off to a bad start. That should be corrected, so that Cuban and U.S. students can freely exchange views on the virtues, problems, and peculiarities of their respective societies. Then the U.S. public would receive a more realistic picture of Cuban society — one more colorful than the monochrome image being peddled by those who parrot the discourse of radical exiles.