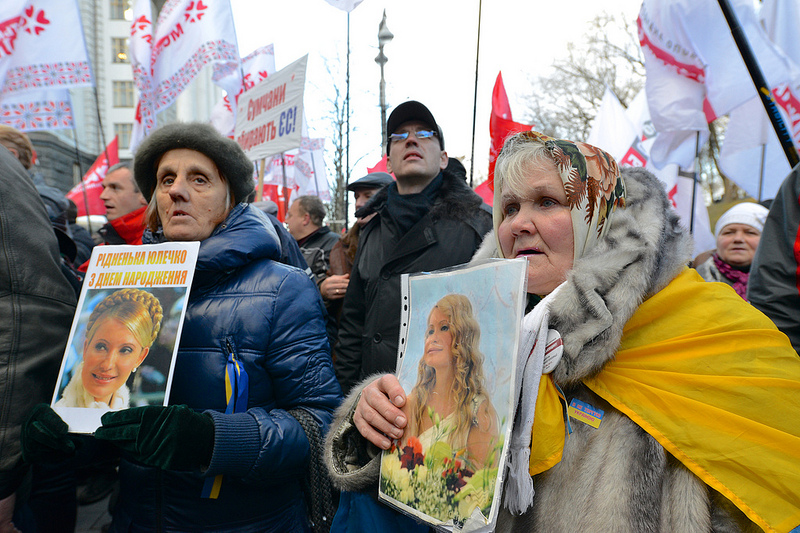 The Untold Story of the Ukrainian Revolution

News from Ukraine is moving so fast that if you don’t look closely, you’ll miss the untold story: a revolution for and by Ukrainian women.
By Natalia Karbowska | February 27, 2014

News from Ukraine is moving so fast that if you don’t look closely, you’ll miss the untold story: a revolution for and by Ukrainian women.

In a week, more than 80 people were killed and some 500 injured when the government of President Viktor Yanukovych — who is now being sought on charges of mass murder — tried to crush our protests with violence. The opposition movement that toppled his corrupt regime came together for a common goal, but it was by no stretch of the imagination homogenous.

People referred to Maidan as a force of “male heroes” while delegating women to cook, clean, and provide moral support. Men donned signs reading, “Women, if you see garbage clean it up. Revolutionaries will be pleased.” Social media was buzzing with requests for “more women in the kitchen.” Some women followed suit with a “hug initiative” to show solidarity by hugging their male heroes.

Protestors organized themselves in “Hundreds” — self-defense groups of roughly 100 people, aligned with their region or cause. Organizing in groups of 100 is an old tradition, from the 16th-century Cossack war of independence. Protestors with cars united in the “AutoMaidan” movement, calling on those with vehicles to block streets and drive alongside people as they marched to the homes of oligarchs. When police started arresting people there was a desperate need of lawyers to protect them. Many women with professional expertise offered their help but often they heard, “you should go to the kitchen; we need help there.”

The kitchen was not an option for us. So, women organized the “women’s hundred.” Women from everywhere in Ukraine wanted to join this informal group, and they helped each other find their place in Maidan. Women taught self-defense classes to female protesters. At Maidan University, an informal education center in the square, the women’s hundred invited lecturers to speak about feminist theory.

As snipers opened fire on civilians and more and more people were injured at the hands of police, it was dangerous for them to go to the hospital. Instead of getting medical treatment, they would simply disappear. The women’s hundred helped organize shifts at the hospital, documenting the names and telephone numbers of the injured protestors in case they went missing. Women lawyers offered legal aid to patients, and women drivers used their skills in AutoMaidan.

The revolution owes a lot to the women’s movement. In the early months, Ukrainians outside Kiev thought the resistance was confined to the capital city. It was women’s rights organizations in western and southern regions of Ukraine that helped export the revolution from Kiev to the regions. Women leaders with years of experience working in the region were trusted, so it made it easier for them to mobilize their communities. When the regions stood up, it was a breakthrough.

Just because the opposition ousted the president does not mean the work is over. Rather, it has just begun. It’s not about changing one public figure for another. It’s about changing the system and fighting against terrible corruption. We want the rule of law and democracy, and we don’t want our new leaders to lead like Yanukovych. We need a new generation of politicians. We need leaders for whom power is not about money, money, and more money. We need those who can easily enter the power structures and easily leave them.

There’s talk that Yulia Tymoshenko will be that politician. Tymoshenko is a powerful leader and a great revolutionary – she can motivate people at the barricades, and they will follow her. But Ukraine has very difficult times ahead. The country is almost bankrupt. We need to make unpopular reforms, we need to build trust in politics and with politicians, and we need to build understanding between east and west Ukraine. We basically need to turn the page and rebuild the country. And for this, we need new types of managers. I do respect Tymoshenko and her role in Ukraine, and I think there will definitely be a place for her, but not as a top manager of the country.

Everything is changing so quickly here, but it is important for us to think about the future. In order for our sacrifices to mean something, our future must reflect the issues that so many died for. I’m convinced that one of the reasons for such incredible corruption was that there were no women in power. The future of Ukraine depends on the other 54 percent of the county: the loud and proud women.