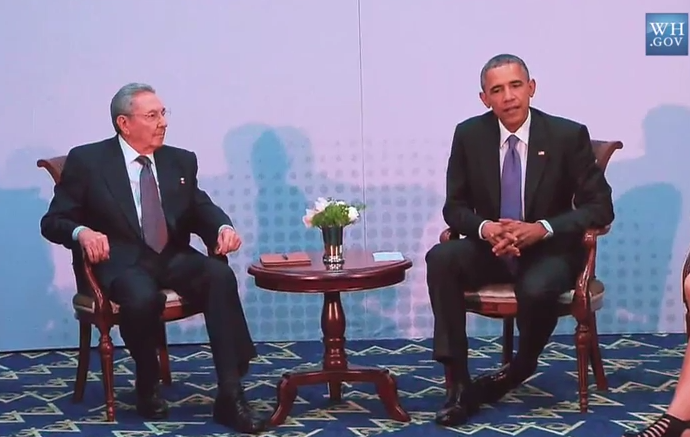 US and Cuba Swap Embassies: Victory of Diplomacy and Democracy

As Cuba and the United States continue down the road of reconciliation, they must still avoid the bumps.
By Arturo Lopez-Levy | July 15, 2015

The governments of United States and Cuba are opening embassies this week in Havana and Washington. This is a major watershed in the road to full normalization of relations between the two states and the two societies. This is also a major win for democracy because the two governments are following the feelings of overwhelming majorities of their peoples. The steps taken by Presidents Obama and Castro give voice to strong trends in both societies in favor of peaceful and constructive U.S.-Cuba relations.

Let’s get history straight. The U.S.-Cuba opening of December 17 is not the product ofa few “Johnny-come-lately” businessmen and lobbyists. It was the victory of the Cuban people’s nationalist resistance against five decades of an embargo that still is counterproductive, immoral, and illegal according to international law. Since the times of President Kennedy, but particularly since the last year of the Johnson administration, every bright mind in the State Department considered the embargo a harmful burden to U.S. values and interests in the world. In 1996, the lawyers of the State Department warned Secretary Warren Christopher that the passing of the Helms-Burton would be damaging to U.S relations with its allies, its standing in international law, and the promotion of democracy in Cuba.

Together with the Cuban nationalists, multiple constituencies in the United States won the grassroots battle for a change of policy since the end of the 1990s. Of particular note have been the religious groups of the National Council of Churches, the American left, and the Cuban American moderates and progressives who took their cause into the heart of constituencies misinformed and indoctrinated about Cuba. Cuban Americans like Carlos Muniz and Luciano Nieves paid for their devotion to good relations between the two countries with their lives. After the end of the Clinton administration the pro-embargo position became increasingly unpopular among libertarians, farmers, and business groups in general. It was a matter of whetting the appetites of the U.S. business community to engage with Cuba, something that began to happen with the processes of economic reform and political liberalization launched by Raul Castro’s government since 2009.

Normalcy is a goal, but normalization is a process. After restoring diplomatic relations, Cuba and the United States need to address the damages caused by the embargo/blockade to Cuba and the nationalization of American properties without compensation by Fidel Castro’s government in the early 1960s. But the two countries should also not let these issues paralyze the agenda of normalization. Flag-raising acts and new diplomatic missions are more than symbolic. They open the gates for substantive relations between the two nations.

The moment calls for a decisive expansion of Cuban diplomatic personnel in Washington DC to address growing U.S. interest in travelling to and knowing more about Cuba. Across the United States, business groups, social clubs, universities, colleges, churches, and other communities are thirsty for information about Cuba and eager to discover the optimal way to interact with the island. The anti-embargo coalition should not miss this opportunity. There are logical differences in the narratives and visions of business groups, religious, and humanitarian entities, but there should be a place for everybody who respects the sovereignty of the two countries. To differentiate themselves from the regime-change agenda, U.S. organizations engaging Cuba should elaborate a common declaration of principles denouncing the embargo maintained under the Helms-Burton law as a violation of the human rights of the citizens of both countries.

The opening of a US. Department of Agriculture Foreign Service mission in the new embassy in Havana is urgent. On the road to the 2016 presidential and congressional elections, the farmer states of the West and the Midwest are going to be major political battlegrounds. It is time that these states’ commercial and educational engagement with Cuba bears political fruit. The price to pay by pro-embargo politicians in Iowa, Missouri, Colorado, or Ohio should be high. President Obama should use all his presidential authority to dismantle as much of the embargo as possible. All possible legalization of trade with the state and non-state sectors in Cuba, educational exchanges, and government-to-government cooperation should be explored.

Next September, the Obama administration can simply stop renewing its presidential powers to sanction Cuba under the 1917 Trading with the Enemy Act. Just by doing so, the president can open the doors of American courts to well funded suits against Congress’s authority to restrain travel by U.S. citizens for reasons different from national security motives as judged by the executive branch under article two of the U.S. constitution. In its Regan versus Wald decision in 1984, the Supreme Court supported by a 5-4 majority the presidential foreign policy powers to control travels and transactions with countries considered enemies. No previous decision of the highest court supports the authority of Congress to infringe on the constitutional right of Americans to travel for promoting democracy in other countries, improve environmental standards, or any other motivation.

The two countries should also go ahead and designate ambassadors. President Obama should nominate for the post somebody other than Jeffrey DeLaurentis, the current chief of the Interests Section. DeLaurentis is a well known professional diplomat with long experience in Cuba who should concentrate in the next months on implementing the full agenda of already adopted changes. Since Marco Rubio and Ted Cruz announced their intentions to block any ambassador for the Cuba post, the president should do what he can to expose their intention to harm American national interests. Obama should nominate a centrist political figure like Christopher Dodd, or Dick Lugar. In the worst-case scenario,the president can make a recess appointment at the end of the mandate to put Cruz and Rubio in their places.

President Raul Castro should follow the example of his brother Fidel by launching a major initiative to speed up the process of rapprochement with the Cuban American community. The Cuban government should address the legitimate demands of the nationalist émigré community that wants to participate and accompany the process of reforms that is taking place. Some of those changes correct some of the root grievances that caused discord with the government in the first place. The government in Havana should remove all official barriers and negative attitudes toward émigré investment in Cuba and lift all obstacles preventing Cubans’ access to the Internet and entrance to their country of origin by sea.

The time to dismantle these walls is now. As a great power in the context of asymmetric relations, the United States has a risk-freeopportunity to dismantle structures of hostility unilaterally. Reciprocity is a useful legal concept for diplomacy, but it is politically detrimental in asymmetric relations. Cuba cannot take the United States off any negative list or give back a naval base in American territory. Similarly Cuba cannot expect deference in its global role as a great power because it is not in such rank. Both Cuba and the United States exhibit great nationalist pride. The current normalization process can bolster that pride as it achieves a win-win outcome.

Arturo Lopez-Levy is a visiting lecturer at Mills College, California and a PhD Candidate at the Josef Korbel School of International Studies at the University of Denver. You can reach him at Alopezca@du.edu or on Twitter at @turylevy.