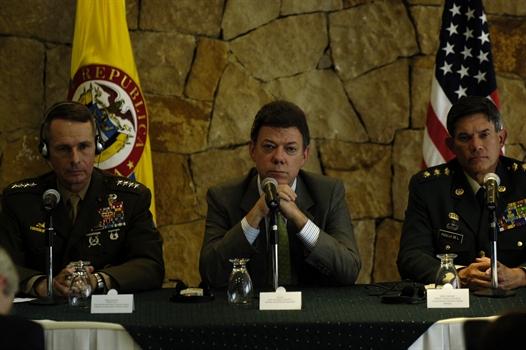 U.S. Base Deal for Colombia: Back to the Status Quo

Despite a legal setback, the State Department says that existing agreements permit the United States to continue its military presence in Colombia.
By John Lindsay-Poland, Susana Pimiento | October 8, 2010 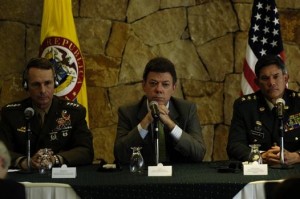 As the dust settles on the August 10 Colombian Constitutional Court ruling declaring invalid the U.S.-Colombia military bases agreement, politicians and analysts are saying that the decision was for the better. Most of those voices come from former supporters of the deal —including Liberal Party presidential candidate, Rafael Pardo.

Last October, the United States and Colombia signed an agreement allowing the United States to use at least seven military bases in Colombia. U.S. troops and contractors already operated from several bases, and U.S. military engagement with Colombia has included more than $6 billion in military assistance since 2000. But the new agreement provoked regional condemnation because of extraterritorial aims outlined for the U.S. presence, and domestic opposition to the imposition on Colombian sovereignty. Venezuelan president Hugo Chavez temporarily severed diplomatic relations and suspended billions of dollars worth of trade with Colombia in response.

Increasingly it appears that a new agreement will not be negotiated or submitted for approval by the Colombian Congress any time soon. Such a move would not only provide space for opponents of the agreement, but risk its defeat, if not in Congress, then in the Constitutional Court’s mandated review. On August 27, The Washington Post reported that Colombian President Juan Manuel Santos was “leaning toward” not submitting the agreement to Congress, and quoted a State Department official as saying “We’re confident that in the intermediate period, or if there is no agreement for whatever reason, our older, existing agreements will permit us to continue our robust and effective cooperation with the Santos administration on counterterrorism and counternarcotics.”

The Constitutional Court ruling declaring the agreement invalid came at a perfect time to help mend broken Colombia-Venezuela relations. Supporters of the base deal in Colombia, which unlike other bases was not exclusively for drug interdiction, interpreted it as a guarantee against the supposed prospect of Venezuelan aggression. Yet, the broken relations had a disastrous economic effect on Colombian exports. Until the military bases deal was signed, Venezuela was the second largest market for Colombian exports.

Furthermore, countries in the region were not happy with the tension and had offered to mediate. So, it did not come as a surprise that only three days after President Santos took office, he received President Chavez in the Caribbean town of Santa Marta, at the hacienda where Simon Bolivar died, and both governments committed to mend their broken relations. Colombia and Ecuador have also been progressively patching up their differences since the March 2008 Colombian raid into Ecuador that prompted Quito to sever diplomatic ties. With these bilateral détentes, the militarist rationale in Colombia for the base agreement disappears.

The Future of the Accord

Because the base deal is an international treaty, it requires congressional approval before going back to the Constitutional Court. While President Santos’s majority in the Congress would surely afford him a swift approval, the same cannot be said about the deal’s transit through the Constitutional Court. Indeed, as many opponents of the deal have pointed out, the Colombian constitution does not allow stationing of foreign troops on Colombian soil, only their transit. Moreover, in its preamble, the constitution commits Colombia to integration with other Latin American and Caribbean nations.

At the same time, it appears that the regional objectives of the accord have been substantially reduced. In other words, Washington and Bogota may allow the agreement to die and go back to the status quo ante, which permitted US-Colombian military cooperation in the war within Colombia, as well as training of other nations’ militaries.

At the end of August, George W. Bush’s top Pentagon bureaucrat for Latin America from 2007 to 2009, Stephen Johnson, published some very telling observations in Foreign Policy. He recommended that the Pentagon “…embrace new methods. While we might need to continue tracking using conspicuous 1950s-vintage planes for now, flexible staging locations using smaller, less noticeable, civilian sensor platforms should become the model. With help from Congress, we might update our technology to do more tracking from ships or remote radar locations. These steps could help shrink our military footprint, reducing the need for facilities upkeep and status of forces agreements that take forever to negotiate and create headaches for partner countries.”

The references to “headaches for partner countries,” “less noticeable” platforms, and the virtues of “shrink[ing] our military footprint” give backhanded credit to the movements in Colombia, the rest of Latin America, and the United States that have campaigned against this and other U.S. base agreements in the region. In that respect, the court’s ruling – and Washington and Bogota’s apparent decision not to resubmit or renegotiate an agreement – is a substantial victory.

Many of the most pernicious aspects of the military base agreement – especially regarding U.S. intentions for extraterritorial uses of the bases in the region – were not contained in the accord itself, but in U.S. budget and planning documents. The use of Palanquero air base for “contingency operations” in a White House budget document, the Southern Command’s ambitions to expand beyond counternarcotics operations to establish a base with “air mobility reach on the South American continent” outlined in an Air Mobility Command planning document, and references to the capacity for “full spectrum operations” from Palanquero to confront “narcotics funded terrorist insurgencies, anti-U.S. governments, endemic poverty and recurring natural disasters” in the region all were unilateral U.S. statements of the bases’ missions. It may be that strong opposition to the agreement chastened these ambitions. But scrapping the base agreement will not necessarily neutralize such regional interventionist plans.

Moreover, of the seven bases specified in the October 2009 agreement, the United States was already using all of them, except possibly the Palanquero air base. Palanquero was slated for an upgrade to facilitate new operations. But it had already been re-approved for U.S. assistance, after being suspended for five years in the wake of a 1998 bombing that killed 17 civilians. That incident, in which Colombian pilots from Palanquero dropped cluster bombs against a civilian target, invoked the Leahy Law, which prohibits military aid to foreign military units that have committed gross abuses until those responsible are prosecuted. U.S. planes bound for Haiti as part of the militarized response to the January 2010 earthquake left from Palanquero.

Both Colombia and the Pentagon still have an incentive to revive the base agreement. The U.S. Congress last year provided $43 million to upgrade the Palanquero air base, but made spending the funds contingent on concluding a base agreement. Since the funds have been authorized for five years, if Colombia addresses its constitutional issues, the funds for Palanquero can be released, to the delight of the Colombian Air Force. In the meantime, any U.S. activities on Palanquero must draw from other funds available to the Pentagon.

The United States has also had access to other bases not named in the agreement, such as the Tres Esquinas base. The court’s decision will not deny access to these bases. But it is possible that the additional privileges for U.S. forces spelled out in the agreement — such as U.S. troops bearing arms, the wide scope of immunity for crimes committed in Colombia by U.S. troops, and access to the electromagnetic spectrum — will be excluded.

What’s more, foreign military assistance – central to the U.S. military presence in Colombia prior to the bases agreement – can be as pernicious a form of military intervention as bases. Training a military force, especially its leadership, on the scale the United States has done in Colombia gives the United States itself extraordinary power within the country, even without the profound and institutional violations and illegitimacies that permeate the Colombian army.

Meanwhile, any hopes that the Santos government might use its political capital to negotiate with the FARC are dim, given the government’s current offensive against the FARC and President Santos’s refusal of Brazilian president Lula’s offers to mediate. The Obama administration shows no interest in a negotiated solution, which would require at least tacit U.S. support. U.S. military assistance and presence, then, will continue to help perpetuate the armed conflict. Accusations of Venezuelan support for the FARC serve to rationalize the U.S. military involvement in Colombia, as well as the destabilization of Venezuela.

The October 2009 military base agreement served as a wakeup call for social movements in the Americas to the growing militarization of U.S. actions in the hemisphere – from assault ship deployments in Costa Rica and the U.S. role in the Honduras coup to military control of humanitarian disaster response in Haiti and elsewhere and the impact of U.S. military aid on political violence in Colombia. The Americas Social Forum in Paraguay last month brought together social activists from around Latin America for a continental campaign against all foreign military presence in the Americas. The Colombian court’s rejection of the base deal points the way for the region as a whole.