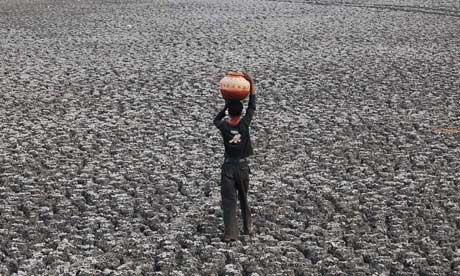 U.S. security agencies are increasingly interested in the potential for conflict over water. But Washington continues to fundamentally misunderstand the root of the problem.
By Shiney Varghese | June 27, 2012 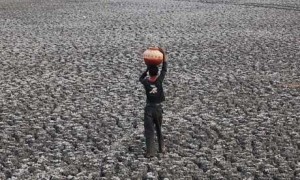 Growing conflicts over who owns water and how to manage it are emerging all over the world. Although debates at the UN and among civil society have moved toward the recognition of water as a basic human right, the United States still lags behind. Washington has instead largely supported private-sector approaches that will likely exacerbate conflicts over water resources. What is perhaps new is that the U.S. intelligence community is also looking at water as a potential national security concern.

A report led by the Defense Intelligence Agency (DIA), Global Water Security attempts to answer the question, “How will water problems (shortages, poor water quality, or floods) impact U.S. national security interests over the next 30 years.” The report focuses on trans-boundary water issues in seven river basins associated with countries that are identified as strategically important for U.S. security: Nile, Tigris-Euphrates, Jordan, Mekong, Brahmaputra, Indus, and Amu Darya. Except for the Nile, these rivers are all in Asia, and together these basins are home to over 1.5 billion people. The national intelligence community judged “that these examples are sufficient to illustrate the intersections between water challenges and US national security.”

According to the DIA assessment, “water problems—when combined with poverty, social tensions, environmental degradation, ineffectual leadership, and weak political institutions—contribute to social disruptions that can result in state failure.” It predicts that “as water shortages become more acute … water in shared basins will increasingly be used as leverage” for political purposes. The assessment expects that the water shortages and pollution will harm the performance of important U.S. trading partners and identifies agriculture and food security as the most important challenges.

The Brahmaputra and Mekong basins account for half of the population in the assessment. Some of the poorest communities in the world live in these basins. Countries such as India, China, and Thailand are considering proposals to divert water from these rivers to meet the water needs of arid regions that fall outside the basins. Environmental justice activists contend that these projects would violate the rights of already vulnerable communities living at the margins. For quite different reasons, environmental scientists are questioning the viability of such inter-basin water transfers and the implications for ecosystem integrity.

Globally, for well over a decade, water issues have been making headlines: The global assessment on water and sanitation by WHO, UNICEF and UN Water Supply and Sanitation Council reported in 2000 that 1.1 billion people did not have access to drinking water and 2.6 billion did not have access to sanitation services. The infamous water privatization in Cochabamba, where massive protests forced out Aguas del Tunari, a consortium led by the U.S. multinational company Bechtel, in April 2000, became a rallying point for water justice activists and helped to draw attention to the ills of water privatization around the world.

Through most of this period, the United States paid scant attention to the global water crisis or related human rights concerns. But as the Institute for Agriculture and Trade Policy noted in early 2009, change was in the air. The following year, the United States chose to abstain rather than vote against the landmark UN General Assembly resolution introduced by Bolivia that recognized water as a human right. There seems to be an increasing recognition that water is a central developmental issue that affects humanity in myriad ways but particularly the rural poor by affecting local food availability. This is evident from the remarks by Secretary of State Hillary Rodham Clinton on World Water Day a year ago: “The water crisis is a health crisis, it’s a farming crisis, it’s an economic crisis, it’s a climate crisis, and increasingly, it is a political crisis. And therefore, we must have an equally comprehensive response.”

Thus by identifying water crisis as a precursor to political crisis, Clinton set the ball rolling for addressing what in her opinion is one of the three pillars of foreign policy: development. She acknowledged that her own ideas around foreign policy’s three Ds – “the need to elevate diplomacy and development alongside defense as pillars of our national security” – had been informed by the views of earlier generations of American leaders such as General George Marshall. In a recent speech Secretary Clinton said: “Some of the greatest threats to our security come from a lack of opportunity, the denial of human rights, a changing climate, strains on water, food, and energy.”

Yet, the United States persists to address development issues as if they were discrete problems rather than closely interconnected. The government continues to hold up the private sector, especially investments by multinational corporations, as the solution to more efficient management of water, food, and energy while neglecting the rights issues that run through all of them. Therein lies the challenge. The private sector is mandated to maximize profit, not to meet development goals. But meeting development goals is in the public interest and thus also a civic responsibility. The private sector can play a limited role in meeting development goals, but only if corporations first ensure that their actions do not violate basic human rights of people.

The two differing visions around meeting development goals were articulated recently in two distinct water-related events held in Marseilles in March 2012. Organized by the World Water Council, the 6th World Water Forum was designed as an opportunity for businesses to work with governments and other stakeholders. Although its earlier boards consisted primarily of private water business, the Council over the years has expanded to include carefully selected staff of international environmental NGOs, representatives of UN organizations, and government officials who favor the private sector’s role in sustainable water management and see the water crisis as a profitable opportunity for investors. With a ministerial that accompanies the meeting, the World Water Forum has attempted to present itself as a multilateral event rather than the private water event that it is. Leading up to the event this time around, the International forum committee adopted several processes similar to that of the other UN events, such as regional meetings and major group interaction. But it also reportedly allowed businesses increased access to senior officials. Many policies discussed and advanced in these fora are likely to further unequal access to resources, including water.

The other event, the Alternative Water Forum, opened two days later in a warehouse across town closer to the old port, at Dock Sud. Here participants from over 90 countries gathered to share their analysis of the fundamental causes of the multiple crises they experience. They shared the challenges they face in realizing the right to water and other related rights such as right to food, right to health, right to livelihood, rights of women, and rights of indigenous peoples. They shared the successes they have had leading up to this event. The Alternative Water Forum sought to highlight low-cost solutions that were often rooted in communities: Innovations to enhance productivity and sustainability that were arrived at by selectively and carefully reintroducing both traditional and modern practices, such as that being undertaken by Tamil Nadu Women’s Collective in India. It also discussed ways to move forward such as the Peoples Guide to Implement Right to Water.

This did not of course change the trajectory of the official World Water Forum. Despite an appeal by over 40 international civil society organization — and despite the warning by Catarina de Albuquerque, the UN special rapporteur on the right to water and sanitation, that the “outcome of the World Water Forum may become ‘solutions’ built on faulty foundations” — the ministerial declaration endorsed by 84 government ministers and dozens of other national representatives from the 6th World Water Forum did not recognize water as a human right.

Once again the United States did not vote in favor of water as a human right, even though the mission later on agreed that in some situations an explicit recognition of the right to water is the only tool that can help ensure access to water to vulnerable communities. Less than a week later, on World Water Day, Secretary Clinton also launched the U.S. Water Partnership, a public-private partnership to help address global water security concerns. This partnership, however, has members such as Coca Cola, whose corporate social responsibility initiatives are well publicized but whose business practices are based on unsustainable levels of water extraction and pollution. If a company’s practices themselves undermine people’s access to water, causing them livelihood-disruption, that is a sure recipe for social disruption, as the experience in Plachimada shows.

The U.S. intelligence assessment Global Water Security has rightly identified some of the most important water-related concerns of this century. But U.S. policy still lags behind by narrowly focusing on efficiency and favoring corporate control rather than actually looking at the causal relationship between human rights violations and the social disruptions that the intelligence community warns about.

A case in point is the role that water plays in food security, which the Defense Intelligence Agency has identified as one of the biggest challenges. The State Department too has been paying attention to global food security concerns since the recent food crisis. Its Feed the Future Initiative already focuses on increasing agricultural productivity through efficient use of water resources and better market access for farmers. This productivity improvement is partly to be achieved through genetic modification of crops to withstand aridity and salinity. According to recent water policy documents, it is also to be achieved by improving water productivity through market mechanisms, such as pricing of irrigation water. An example is the World Economic Forums’ Water Initiative, a private sector-led consortium, and its Charting Our Water Future. Such approaches will shift water allocation in favor of economically productive enterprises, and crops desired by the agri-food value chains, rather than in support of local food sovereignty, further increasing poverty and related human right violations.

The challenges identified by the DIA may result in the State Department promoting further corporatization of water management as a way of addressing the crisis. A human-rights based approach to “water for food security,” on the other hand, would prioritize water allocation for basic needs, including water for livelihood security, before applying market mechanisms for improving economic efficiency of water use. If the United States shifted its focus away from corporate partnerships as a means for tackling developmental challenges, and adopted a rights-based approach to development, the State Department could simultaneously help address the global water security concerns and the global food crisis.

Shiney VargheseForeign Policy In Focus contributor Shiney Varghese is a senior policy analyst at the Institute for Agriculture and Trade Policy (IATP) where she leads IATP's work on global water policy, focusing on the water crisis, its impact on water and food security, and possible local solutions that emphasize equity, environmental justice and sustainability.