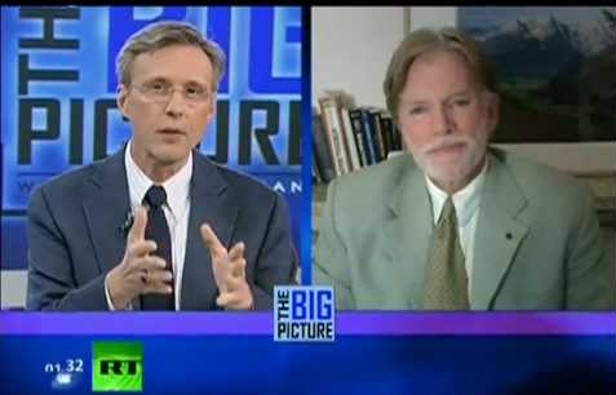 Donald Trump's interest in Russia boils down to one word: racism.
By Alec Dubro | March 10, 2017

So, what is the story with Donald Trump and Russia?

It’s true that he seeks business deals wherever he can find them, and that he may have some financial and other links to the Putin regime. It’s true that allies Rex Tillerson and the recently departed Michael Flynn have strong and murky ties to the Putin government. Oil deals certainly are a big part of it. But that really doesn’t account for Trump’s apparently deep and abiding love for Russia—no matter how much difficulty it causes him. And searching for secret messages and deals, while necessary, will not reveal the connection.

That’s because, on the deepest level, it’s not about business—it’s race. Trump, a reflexive and largely unthinking racist, is responding to the siren call of white nationalism, a call that may upend longtime geopolitical alliances. Whatever it brings, though, there is an emotional bond between much of the right wing in the U.S. and their counterparts worldwide that transcends politics and resides in the realm of mystical racism.

Still, Russia, a strategic opponent, would seem a strange bedfellow—until we look at the numbers. The United States and Russia are homes to the world’s largest populations of people who consider themselves white. According to the 2010 census, the U.S. has about 200 million white people, or nearly two-thirds of the country. In their 2010 census, Russia reported some 111 million ethnic Russians, almost all of whom are white-skinned; they make up some 80 percent of the nation.

Where the White People Are

It’s not easy to determine how many white people there are in the world, largely because it depends on who’s doing the defining. Much of the population of the Middle East is visually similar to European peoples. And, much of the population of Northeast Asia is white in terms of melanin. But that’s of course not what this is about; it’s about European, overwhelmingly Christian, people and their descendants spread overseas.

In that case, there’s about a billion of them, with about a third of them in the United States and Russia. But despite their numbers and continued dominance, they can be a very frightened population. That’s because both those numbers and its assumed dominance are in decline.

It’s true that overall, white birthrates have declined. But that has more to do with affluence than the absence of melanin. Birthrates have declined similarly in other economically advantaged populations across the globe regardless of ethnicity. And into this baby vacuum have moved millions of people, most of whom are not white people – at least in the Eurocentric sense.

Whether this slowing of the birthrate, coupled with immigration, has any real significance in the lives of white people in general is unclear. But it is clear that the fear is very real, persistent, and dangerous.

And that’s what’s driving white nationalist politics across the globe, and what Donald Trump has tapped into. He certainly isn’t the first American president to express his love for white nationalism; pre-liberation South Africa and Rhodesia were especially close to Ronald Reagan’s heart. But Reagan was prevented from having a pan-white vision because of the Red Menace. Trump has no such restriction. In fact, he seems to be embracing all things from behind the former Iron Curtain—including its women.

The end of national Communism has given Western racists a chance to add to their numbers even as their birthrates have fallen. Russia, as the number two white power, figures most highly in the equation. So, this seemingly bizarre romance between Trump and Putin becomes much more explicable once we figure in race.

How does Trump actually feel about this? Is he consciously aware of it? Is it akin to a doctrine? It’s hard to tell since Trump’s actual writings are pretty scant—at least those over 140 characters.

Luckily, there are theorists who can put this doctrine into English words. For a time, Pat Buchanan was the most enthusiastic exponent of unadorned whiteness, but he, like his onetime boss, Reagan, was confined by his equally fervent anticommunism. But Buchanan is haunted by the potential disappearance of white people and conservative Christianity, and has since become an admirer of Putin. In his blog in 2014, he said of Putin, “He is also tapping into the worldwide revulsion of and resistance to the sewage of a hedonistic secular and social revolution coming out of the West. In the culture war for the future of mankind, Putin is planting Russia’s flag firmly on the side of traditional Christianity.”

However, Buchanan came late to the party. One who quickly spotted the opportunities in Mother Russia was none other than his eminence, Dr. David Duke. The Klansman and one-time Louisiana congressman received his doctoral in history in a Ukrainian diploma mill cited for its pervasive anti-Semitism. Nevertheless, he became an eloquent theorist of what has become an important part of Trump’s worldview.

In 2004, when Duke was just beginning his advanced studies, he published an impassioned broadside entitled, “Is Russia the Key to White survival?” One can hardly get more direct than that. In it, he laid out his fears and dreams in muscular and often lurid prose.

Our race faces a world-wide genetic catastrophe. There is only one word that can adequately describe it: genocide. It is a relentless and systematic destruction of the European genotype.

Unchecked, low White birthrates, massive non-White immigration and intermarriage will mean the complete genetic destruction of the great European race that produced an overwhelming share of the world’s great art and literature, scientific and economic advancement. Make no mistake about it: unless our people wake up and act courageously, our very genotype; our people as a unique, living breed of life upon this planet – will be wiped out! Such would be the greatest ecologic and evolutionary disaster ever to befall our planet!

And whether they agree with Duke—or even know who he is—millions have a visceral connection to this sentiment. And, they are frantically searching for salvation, or at least relief. Duke knows the answer: “All across the Western world, I see our racial consciousness growing, our movements increasing, our spirit rising. Everywhere, our people are putting aside petty differences and nationality divisions and understand that now we must have White Pride Worldwide and White Unity.” Nowhere is that truer, he said, than in Russia, “Russia is a White nation! Of the many capital cities of Europe, it is accurate to say that Moscow is the Whitest of them all.”

Duke admits here that there is but one obstacle preventing white hearts in Russia and the U.S. from beating as one. As you might guess, it’s the Jews… again. But even in 2004, he saw a powerful – though flawed – leader riding shirtless to the rescue. “Although there are many reservations about President Putin,” said Duke, “he is perhaps the only leader in the Western World to take any measures against the Jewish-Supremacist media bosses.” He was equally happy 12 years late rabout the results of the 2016 U.S. presidential elections. On election night, he tweeted, “This is one of the most exciting nights of my life… make no mistake about it, our people have played a HUGE role in electing Trump!”

If some white nationalists view Duke as rather passé, others are picking up the torch. Alt-right mouthpiece Richard Spencer has jumped on the Siberian Express. According to Mother Jones, “Spencer calls Russia ‘the most powerful white power in the world’ and admires Vladimir Putin’s authoritarianism—he would gladly admit most Russians into his ideal ethnostate.”

Has Trump read Duke and his progeny? At this point, it’s not clear if Trump reads anything. But from the statements and dog whistles coming out of his campaign, it’s apparent that they’re not so far apart. And recall, Trump was very slow to disavow Duke, and did so weakly.

Recently, there’s been an attempt to tie Trump to Russian white nationalism through his alt-right-hand man, Steve Bannon. And to do so by noting that Bannon is familiar with Russian fascist philosopher, and former Putin advisor, Aleksandr Dugin. It’s a stretch. Bannon, who’s more sophisticated than his haggard visage would indicate, is a very nuanced admirer of Russia and Putin. Trump didn’t need Bannon to convince him of the importance of White Russian sentiments. Even if he denies it, he is very much part of the dangerous movement he used to ride to the U.S. presidency. That movement—and Russia’s role in it has not gone unnoticed. Last August, Hillary Clinton said: “And the grand godfather of this global brand of extreme nationalism is Russian President Vladimir Putin.”

But that was put more precisely by Casey Michel, writing in The Diplomat:

And much as Trump has aped the rotted, regressive policies of Putin-friendly leaders throughout Europe (see Hungary’s Viktor Orban) so, too, has he helped give a national platform to the groups and movements that have not only fueled a resurgence of white nationalism in the United States, but who have gone out of their way to praise, of all international leaders, Putin.

As Japan found out in World War II, it’s not easy to create an alliance based on nothing more than geography and appearance; national and ethnic antagonisms can easily overwhelm it. It may also be that technological materialism and multinational corporatism is just too strong to upend.

But most important is that the world is becoming integrated. People are on the move—whether running from or reaching for—and nothing seems likely to stop that. Entrenched race fear can oppose it, but all that can do is cause increased misery.

Still, many Americans have heard the siren call of fascism, and they seem to be at least considering it. Whether they endorse a mutual embrace with Russia on racial grounds remains an open question.

But it has its appeal. As David Duke said:

“When a racially aware Russia and reawakened America become united in our cause, the world will change. Our race will survive and together we shall go to the stars!”