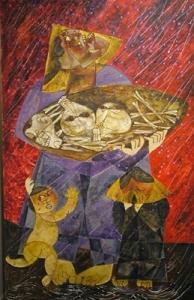 War and Peace: An Epic Mural

The Vietnamese-born artist Huong has created an immense mural that depicts the horror of war and the imperative of peace.
By John Feffer, Kyi May Kaung | December 5, 2008

Huong, Of Her Treasure

Curved, feminine black lines of varying thickness traverse the picture plane. The colors are bright, the surfaces textured with marks like those made with a comb. Doves flying about and the white clothes of some of the figures are rendered with translucent layers of oil paint on canvas. The women have café-au-lait-colored skin, heart-shaped faces, and large doe-eyes, half-shut under heavy eyelids.

There are mothers and children in Huong‘s art, but they are usually portrayed in searing situations. In Of Her Treasure, a woman holds a bowl of her menfolk’s bones. The Wedding Gift shows a tormented bride in good-luck red, clutching a wooden box with her husband’s skull in it, flanked by bruised, naked women exposing their genitals. There are broad areas of patterns such as the gold medallions on the bride’s bright robe and the delicate tracery of white blossoms on the clothes of the woman on the right in The Wedding Gift.

Huong’s art owes something to Picasso. The large number of sunken-cheeked skulls — some with their lips pulled back in rictus, some with double sets of teeth like sharks — is reminiscent of the horse in Guernica. They have the immediacy of Caravaggio’s Doubting Thomas, in their ability to cause one to stop and take notice, and look again. What was that? What is the artist telling us?

Huong will be presenting her exhibit, “Peace Mural,” in Washington, DC in December. The mural consists of 600 square feet of paintings, 2,000 original oils and acrylics on canvas, which she has been working on since 2000, when she decided that she could no longer be just a commercial artist.

Huong, who was born in Vietnam in 1950, is petite and graceful. She speaks in a deep, earthy voice, and is endlessly cheerful and full of self-deprecating humor, contrary to what one would expect from her subject matter. She’s not stuffy at all. She sounds as if she’s in a constant state of urgency and excitement over new discoveries, as her words trip over each other in strings of similes and synonyms. This isn’t because she thinks you don’t get it, but because of her generous nature. Her art is similarly prolific.

I asked her, if it was true, as I seemed to have read somewhere, that she fled Saigon in a helicopter, after the Tet Offensive and the fall of Saigon, with her infant son in her arms and only one shoe on.

She told me she was a boat person. I checked her website again. It said nothing about a helicopter. I must have colored that in from a movie I saw recently.

In Vietnam, she was a journalist. But in America, due to the language barrier, she “broke her pen and picked up her paintbrush.” She remarried and went to Alaska, where she was successful as a painter of landscapes and abstracts.

The first and second Iraq Wars affected her deeply. She told me it was like watching a play she’d seen before, the way it played out. Her husband gave her as a present a 10,000-square-foot studio so that she could paint. It is like 10 studios, she told me; when she gets to one end, the painting on the other end is dry.

She typically works on 10 to 15 canvases at a time, sketching at the first stage and then spending a month at the second stage of painting. In Vietnam, she had only ever seen one Picasso, a reproduction of “Three Musicians” her father, an officer in the South Vietnamese army, had brought back for her from a trip overseas. Picasso, Gustav Klimt, and Braque were her favorites, but if she could buy only one painting, she’d rather have a Braque than a Picasso.

In Vietnam, Huong lost her father, her brother, and other relatives and friends. Huong told me she “lived through war for 25 years and lost so much, I became so calm. Otherwise I would become crazy.” She said she had trained herself to endure the pain and to understand.

In 1995, Huong did a remarkable thing. After staging a total of 85 one-woman shows over the years, she moved from Miami to Stuart, Florida, which she says is 99% pro-war and where 6% of the wealth of the USA. is concentrated. At her last show, she said people cried, hugged, and kissed. They also call her names, throw tomatoes and eggs, and send hate mail, which she said, “is all part of the public reaction.”

At first she was alone, but then people came and stood with her, at exhibits and peace demonstrations. Her colorful 30×30″ squares of words and symbols, when laid side-by-side or held up by demonstrators standing in line, spell out important words and slogans such as “Peace” and “No More War” in reds and yellows on black backgrounds.

She “tore up the flag into little parts.” I asked her if she literally ripped the flag, but she said she “tore up the canvas” or rather, deconstructed the American flag into these quilt-like 30×30″ (almost a yard) squares. These she dripped with lines of red paint. In one postcard from 2000, she is shown holding a big brush dipped in red and a big white tub of bright red paint.

Huong incorporated the flags of all the nations who were combatants in the Vietnam War into her war pieces and “changed the white stars into doves.” Huong’s mural transforms the pain and suffering of war and remembrance into a hopeful message of peace.

Foreign Policy In Focus contributor Kyi May Kaung is an artist herself.