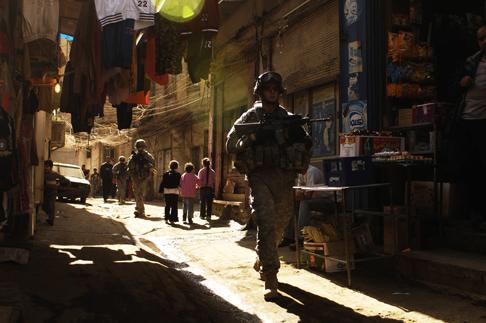 It didn't take long for the world to recognize that the US invasion and occupation of Iraq constituted a "dumb war." But dumb wasn't the half of it.
By Phyllis Bennis and Co-signatories | March 19, 2013

Originally published in The Nation. 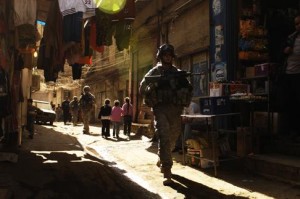 This statement on the tenth anniversary of the launch of the Iraq War was signed by Phyllis Bennis, John Cavanagh and Steve Cobble (Institute for Policy Studies); Judith LeBlanc and Kevin Martin (Peace Action); Laura Flanders (GritTV); Bill Fletcher (The Black Commentator); Andy Shallal (Iraqis for Peace); Medea Benjamin (Code Pink); Michael T. McPhearson and Leslie Cagan (United for Peace and Justice); Michael Eisenscher (US Labor Against the War) and David Wildman. All organizations for identification only.

It didn’t take long for the world to recognize that the US invasion and occupation of Iraq constituted a dumb war, as then Senator Barack Obama put it. But “dumb” wasn’t the half of it.

The US war against Iraq was illegal and illegitimate. It violated the UN Charter, the Geneva Conventions and a whole host of international laws and treaties. It violated US laws and our Constitution with impunity. And it was all based on lies: about nonexistent links between Iraq and Al Qaeda, about never-were ties between Saddam Hussein and Osama bin Laden, about Iraq’s invisible weapons of mass destruction and about Baghdad’s supposed nuclear program, with derivative lies about uranium yellowcake from Niger and aluminum rods from China. There were lies about US troops being welcomed in the streets with sweets and flowers, and lies about thousands of jubilant Iraqis spontaneously tearing down the statue of a hated dictator.

And then there was the lie that the US could send hundreds of thousands of soldiers and billions of dollars worth of weapons across the world to wage war on the cheap. We didn’t have to raise taxes to pay the almost one trillion dollars the Iraq war has cost so far, we could go shopping instead.

But behind these myths the costs were huge—human, economic and more. More than a million US troops were deployed to Iraq; 4,483 were killed; 33,183 were wounded and more than 200,000 came home with PTSD. The number of Iraqi civilians killed is still unknown; at least 121,754 are known to have been killed directly during the US war, but hundreds of thousands more died from crippling sanctions, diseases caused by dirty water when the US destroyed the water treatment system and the inability to get medical help because of exploding violence.

And what are we leaving behind? After almost a decade the US finally pulled out most of its troops and Pentagon-paid contractors. About 16,000 State Department-paid contractors and civilian employees are still stationed at the giant US embassy compound and two huge consulates, along with unacknowledged CIA and FBI agents, Special Forces and a host of other undercover operatives. The US just sold the Iraqi government 140 M-l tanks, and American-made fighter jets are in the pipeline too. But there is little question that the all-encompassing US military occupation of Iraq is over. After more than eight years of war, the Iraqi government finally said no more. Their refusal to grant US troops immunity from prosecution for potential war crimes was the deal-breaker that forced President Obama’s hand and made him pull out the last 30,000 troops he and his generals were hoping to keep in Iraq.

But as we knew would be the case, the pull out by itself did not end the violence. The years of war and occupation have left behind a devastated country, split along sectarian lines, a shredded social fabric and a dispossessed and impoverished population. Iraq remains one of the most violent countries in the world; that’s the true legacy of the US war. We owe a great debt to the people of Iraq—and we have not even begun to make good on that commitment.

The US lost the Iraq War. Iraq hasn’t been “liberated.” Violence is rampant; the sectarian violence resulting from early US policies after the 2003 invasion continues to escalate. Of course we didn’t bring democracy and freedom to Iraq—that was never on the US agenda. The failure to “liberate” Iraq cannot be the basis for assessing the war.

The real assessment must be based on whether the war achieved the goals that the Bush administration and its neo-conservative, military CEO and Pentagon profiteering partners established for this war:

Consolidating permanent US control over Iraq’s oil. Nope, US oil companies are just some of the myriad of foreign oil interests in Iraq’s oil fields.

Leaving behind a pro-US, anti-Iranian government in Baghdad. Hardly, Prime Minister al-Maliki is barely on speaking terms with anyone in Washington.

Guaranteeing permanent access to US bases in Iraq. Not even close, all but two of the 500 plus US bases and outposts were either closed down or turned over to the Iraqi military.

Ensuring that a post-war Iraqi government would allow the US to use Iraq as a jumping off point to attack Iran. No way, despite continuing billions of dollars of our tax money, the Iraqi government today is allied more closely to Iran than the US.

In the buildup to the war, too many media, government officials, academics and others allowed fear to curb their tongue or their eagerness to curry favor with those in power to stifle their speech. This remains a crucial lesson as we stand up to the escalation of Obama’s drone war and continue to challenge those who call for war against Iran.

The war in Iraq began with significant support, with many people accepting the false claims that this new war would bring security to a still-frightened US public. But that support did not last long. Within the first years, pro-war assumptions had been reversed, and by the end, the anti-war movement and escalating casualties had turned around public opinion so thoroughly that overwhelming majorities admitted the war in Iraq was wrong and should never have been fought in the first place.

And this war showed us our power. It proved the possibility of globalizing opposition even before the war began. The mobilization of February 15, 2003, when the broad United for Peace and Justice coalition joined with allies around the world on the day the world said “No to War!” February 15 created what The New York Times called “the second super-power,” ready to challenge the US drive towards empire. Our movement changed history. While we were not able to prevent the invasion of Iraq a month later, that mobilization proved the illegality of the war. It demonstrated the isolation of the Bush administration, pulled governments and the United Nations into a trajectory of resistance, helped prevent war in Iran and inspired a generation of activists, including some of those who, eight years later, would create the Arab Spring in Cairo’s Tahrir Square.

The US troops left behind a devastated, tortured Iraq. What they didn’t leave behind is one dollar for reparations or compensation. That battle still lies ahead. The US war in Iraq may be over, but we owe an apology to all those who suffered from the war. And that apology must be grounded in recognition of our enormous debt to the people of Iraq, a debt for which compensation and reparations are only a start. Our real obligation, to the people of Iraq and the region and the rest of the world, is to transform our government and our country so that these resource-driven wars, shaped by lies and fought for power and for empire, whether in Iran or somewhere else, can never be waged again.