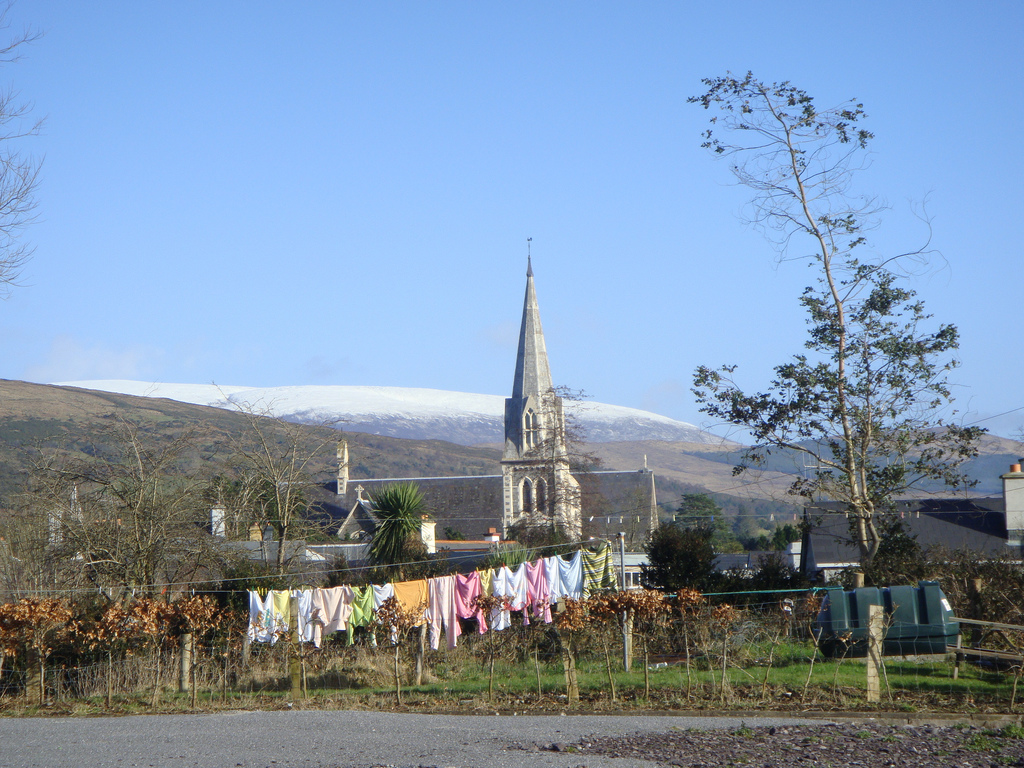 What Ireland Can Teach Europe

Ireland is a small player, but it has much to teach its neighbors now suffering extremism, division, and debt.
By Conn Hallinan | October 12, 2017

The tiny Irish village of Ballingarry, in the heart of County Limerick, with its narrow streets and multiple churches, seems untouched by time and untroubled by the economic and political cross currents tearing away at the European Union (EU).

But Ireland can be a deceptive place, and these days nowhere is immune from what happens in Barcelona, Paris, and Berlin.

Ballingarry — the place my grandfather emigrated from 126 years ago — was a textile center before the 1845 potato famine starved to death or scattered its residents. Today it houses five pubs — “one for every 100 people,” notes my third cousin Caroline, who lives with her husband John next to an old Protestant church that’s been taken over by a tech company.

When the American and European economies crashed in 2008, Ireland was especially victimized.

Strong-armed into a “bailout” to save its banks and speculators, the Irish Republic is only beginning to emerge from almost a decade of tax hikes, layoffs, and austerity policies that impoverished a significant section of its population. The crisis also re-ignited the island’s major export: people, particularly its young. Between 2008 and 2016, an average of 30,000 people aged 15 to 24 left each year.

The Irish economy is growing again, but the country is still burdened by a massive debt, whose repayment drains capital from much needed investments in housing, education and infrastructure. But “debt” can be a deceptive word. It’s not the result of a spending spree, but the fallout from a huge real estate bubble pumped up by German, Dutch, and French banks in cahoots with local speculators and politicians, who turned the Irish economy into an enormous casino. From 1999 to 2007, Irish real estate prices jumped 500 percent.

People here have reason to be wary of official government press releases and Bank of Ireland predictions. The center-right government of former Prime Minister Enda Kenny crowed that the economy had grown an astounding 26 percent in 2015, but it turned out to be nothing more than a bunch of multinationals moving their intellectual property into Ireland to protect their profits. The forecast has since been labeled “Leprechaun economics.”

Former U.S. Speaker of the House, Thomas “Tip” O’Neill — whose ancestors hailed from County Donegal in Ireland’s northwest — once said that “all politics are local,” and that’s at least partly true here. The news outlets are full of a scandal about the Irish police, the Garda, cooking breathalyzer tests to arrest motorists, an upcoming abortion referendum, and a change of leadership in the left-wing Sinn Fein Party.

There’s also deep concern about the Brexit. Britain is Ireland’s number two trading partner — the U.S. is number one — and it’s not clear how London’s exit from the EU will affect that. There’s also the worrisome matter of the now open border between the Republic and Northern Ireland, accompanied by fears that Brexit will undermine the Good Friday peace agreement between northern Catholics and Protestants.

But even the Irish have a hard time focusing on themselves these days, what with the German elections vaulting Nazis into the Bundestag and Spanish Prime Minister Mariano Rajoy’s auto da-fe against the Catalans. Watching Spain’s Guardia Civil using truncheons on old people, whose only crime was trying to vote, felt disturbingly like the dark days when General Francisco Franco and his fascist Falange Party ran the country. 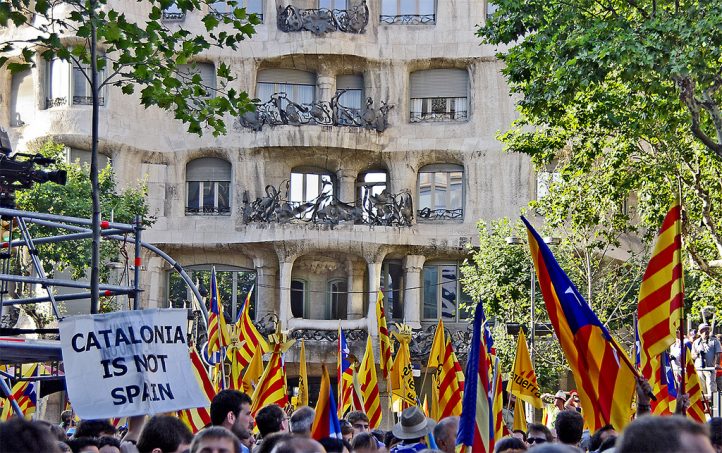 There’s an interesting parallel between Catalonia and Ireland. Dublin is still awash with the 100th anniversary commemorations of the 1916 Easter Rebellion. At the time, the uprising was opposed by many of the Irish, but when the British authorities began executing the rising’s leaders, sentiment began to shift. In 1921, the British threw in the towel after 751 years.

It’s a lesson Rajoy should examine. Before he unleashed the Guardia Civil, polls showed the Catalans were deeply split on whether they wanted to break from Spain. That sentiment is liable to change rather dramatically in the coming weeks.

There are a number of cross currents in Europe these days, although many of them have a common source: an economic crisis in the European Union and austerity policies that have widened the inequality gap throughout the continent. The outcome of the German elections is a case in point.

Going into the September 25 vote, the media projected a cakewalk for Chancellor Angela Merkel and her Christian Democratic Union/Christian Social Union alliance. What happened was more like a train wreck: The major parties, including the center-left Social Democratic Party (SDP), dropped more than 100 seats in the Bundestag, and the openly racist, right-wing Alternative for Germany took almost 13 percent of the vote and 94 seats.

In some ways the German election was a replay of the British election last June, but without the Labor Party’s left-wing turn. Faced with the British Conservative Party’s numbingly vague platform of “experience” and “order,” voters went for Labor’s progressive program of taxing the rich, offering free tuition, and improving health care and education, and denied the Tories a majority.

Merkel ran an election not very much different from the British Conservatives, but with the exception of the small, left-wing Die Linke Party (which was itself divided), there weren’t a lot of alternatives for voters.

The SDP were part of Merkel’s grand coalition government, making it rather hard to critique the chancellor’s policies. The SDP leader, Martin Schulz, started off campaigning against economic inequality, but shifted to the middle after losing three state elections. In their one big debate, it was hard to distinguish Schulz from Merkel, and both avoided climate change, housing, the Brexit, and growing poverty.

There was certainly ammunition to go after the chancellor with. In Merkel’s 12 years in power, the chasm between rich and poor in the EU’s wealthiest state has widened. In spite of low unemployment, almost 16 percent of the population is near the poverty line. The problem is that many are working low-paying temp jobs.

Under normal circumstances that would be a powerful issue, except that it was Chancellor Gerhard Schroeder and the SDP who put policies in place that led to rise of temporary jobs and reduced wages. Suppressing wages boosted German exports but left a whole section of the population behind.

According to the European Commission, almost one-third of Europe’s workforce is part of the “gig” economy, many working for under minimum wage and without benefits. The replacement of employees with “independent contractors” has allowed companies like Uber to amass enormous wealth, but the company’s drivers end up earning barely enough to get by.

In short, German voters didn’t trust the SDP and looked for alternatives. Given the hysteria around immigration, some choose the fascist Alternative for Germany. As odious as it is to have the inheritors of the Third Reich sitting in the Bundestag, it would be a mistake to think the party’s program was behind its success. The Alternative has nothing to offer but racism and reaction, and neither will do much to close the wealth gap in Germany.

Dublin has turned over a wing of its National Library to an exhibit of the great Irish poet and playwright, William Butler Yates, who is much quoted these days. A favorite seems to be some lines from “The Second Coming”: “Thing fall apart; the Centre cannot hold…the best lack all conviction, while the worst are full of passionate intensity.”

On one level that seems a pretty good description of the rise of Europe’s extreme right-wing parties, and the precipitous decline of center and center-left parties. It’s an attractive literary simile, but misleading.

After all, it was the “Centre” that introduced many of the neoliberal policies that wiped out industries, cut wages, and abandoned whole sections of the population. When French, British, German, Spanish, Italian, and Greek socialists embraced free trade and wide-open markets over strong unions and social democracy, is it any wonder that voters in those countries abandoned them?

When center-left parties returned to their roots, as they did in Britain and Portugal, voters rewarded them.

After being dismissed as a deluded leftist who would destroy the British Labor Party, suddenly Corbin is being talked of as a future prime minister. In the meantime the alliance of the Portuguese Socialist Party with two other left parties is rolling back many of the more onerous austerity policies inflicted on Lisbon by the EU, sparking economic growth and a drop in the jobless rate.

“Beware of the Risen People” 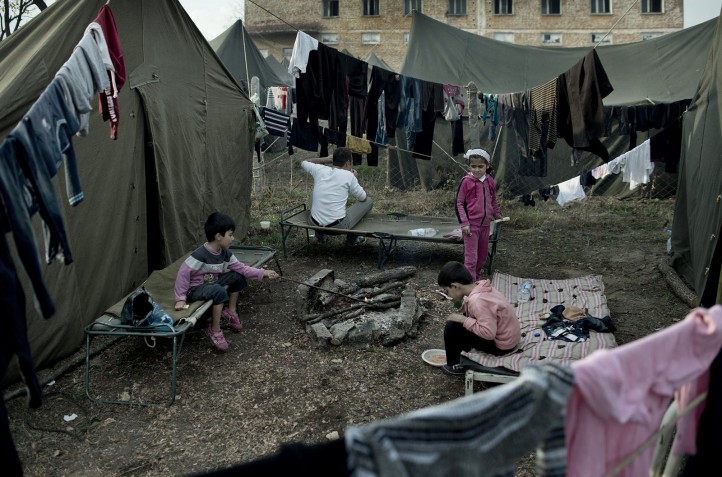 Visually, Ireland is a lovely country, though one needs to prepare for prodigious amounts of rain and intimidatingly narrow roads (having destroyed two tires in 24 hours I was banished to riding shotgun halfway through our trip).

But while the meadows sweeping down from dark mountains in Kerry look timeless to the tourists who pack the scenic Ring, they are not. Ireland’s modern landscape is a deception.

In 1845, the population of Kerry was 416 people per square mile, compared to 272 in England and Wales. Those sweeping meadows that the tourists ogle were crowded with cottages before three years of potato blight swept them all away, “Look at those great grass fields, empty for miles and miles away,” wrote the Bishop of Clonfert in 1886. “Every one of them contained once its little house, its potato ground, its patch of oats.”

It is ironic that Europe is so befuddled by the flood of immigrants pounding on its doors, or that Europeans somehow think the current crisis is unique. Between 1845 and 1848, 1.5 to 2 million Irish fled their famine-blackened land (while another million — likely far more — starved to death) in large part due to the same kind of economics Europe is currently trying to force on countries like Ireland, Portugal, Italy, Greece, Spain, and Cyprus.

“God brought the blight, the English brought the famine,” is an old Irish saying, and it’s spot on. The Liberal Party government in London was deeply enamored with free trade and market economics, the 19th century version of neoliberalism, and they rigidly applied its strictures to Ireland. The result was the single worst disaster to strike a population in the 19th century. Between 1845 and 1851, Ireland lost between 20 and 25 percent of its people, although those figures were far higher in the country’s west.

Today, the migrants are from Syria, Somalia, Yemen, Iraq, Afghanistan, and Libya, fleeing wars that Europeans helped start and from which some make a pretty penny dealing arms. Others are from Africa, where a century of colonialism dismantled existing states, suppressed local industries, and throttled development. Now those chickens are coming home to roost.

Ireland is a small player in the scheme of things, but it has much to teach the world: courage, perseverance, and a sense of humor. When the Anglo-Irish Treaty was signed in 1921, the people of Galway pulled down a statue of Lord Dunkellen and tossed it into the sea, while a band played “I’m Forever Blowing Bubbles.”

And Europe would do well to pay attention to some if its poets, like Patrick Pierce, who was executed at Kilmainham jail for his part in the Easter Rebellion: “I say to the masters of my people, beware. Beware of the risen people who shall take from ye that which you would not give.”