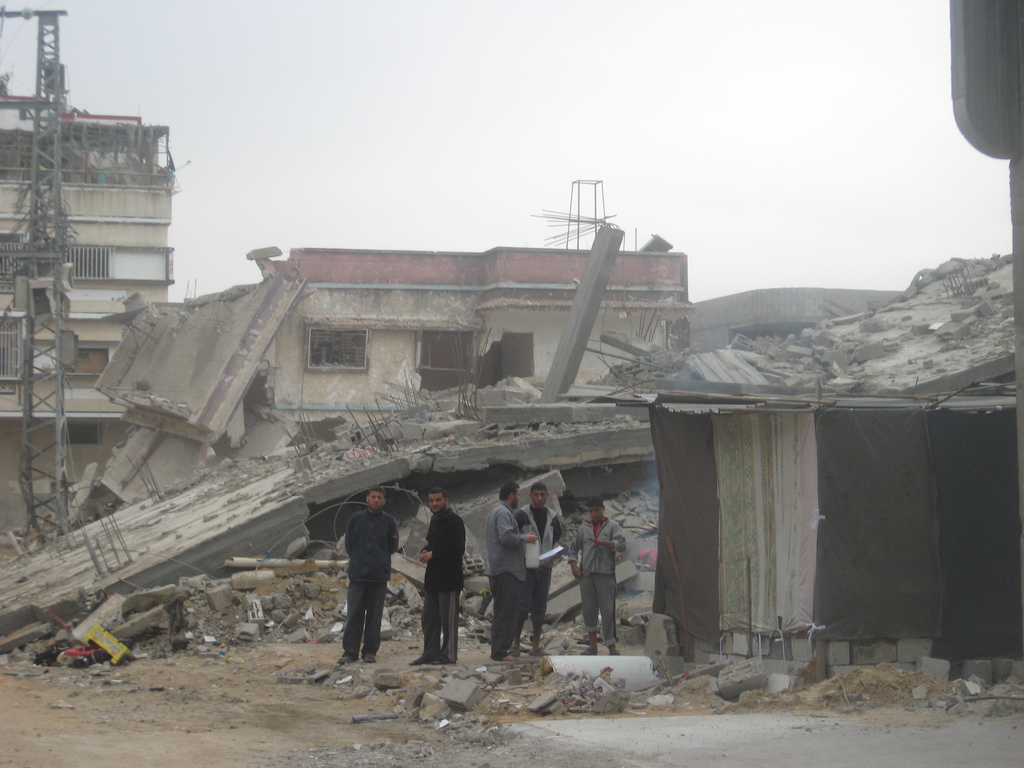 What the Mainstream Media Got Wrong About Gaza

You may have heard that “both sides” committed abuses in last Gaza war. But there's no comparison when it comes to the scale of the violations — or the body count.
By Qossay Alsattari | July 30, 2015

These were the last words of Anas “Bader” Qdeih, a 7-year-old Palestinian from Gaza who was killed by an Israeli mortar shell as he played in front of his house. His story is one of many that were documented in a recent report issued by the United Nations Human Rights Council on the 2014 Gaza war, which Israel called “Operation: Protective Edge.”

The report holds fighters from both camps accountable for violations of international law during the conflict, leading some media outlets to suggest that the investigators had somehow equated the actions of Palestinian and Israeli forces. Headlines in the New York Times, Washington Post, Los Angeles Times, and Boston Globe, for example, all focused on the findings that “both sides” had been held liable. But the real substance of the report concerns the imbalance of the violations between the two sides.

In short, while the Israeli military and Palestinian armed groups each committed abuses, there’s simply no comparison when it comes to the scale of the violations — or the body count.

All Out of Proportion

Most striking was the disproportionality of the casualties. According to the investigators, the war killed 2,251 Palestinians, including 1,462 civilians — over half of them women and children. By contrast, six Israeli civilians and 67 soldiers were killed.

Part of what made the civilian toll so heavy was what the report characterized as “patterns of strikes by Israeli forces on residential buildings” in Gaza. That is, instead of targeting military installations, Israeli bombers purposefully and systematically attacked private homes.

Most of the strikes came when families were breaking their Ramadan fasts or sleeping. “The timing of the attacks,” the investigators observed, “increased the likelihood that many people, often entire families, would be at home.” They added that the residential strikes “rendered women particularly vulnerable to death and injury,” accounting in part for the hundreds of civilian women who perished in the war.

Often these bombings were preceded only by a “roof-knock” — a small shot fired before a full-scale bombing, putatively intended to give the residents of a targeted building a moment to evacuate. The report suggested, though, that roof knocks “cannot be considered an effective warning given the confusion they often cause to building residents and the short time allowed to evacuate before the actual strike.”

Israeli authorities repeatedly claimed that rockets had been fired from residential buildings, but they failed to provide sufficient evidence that the 18,000 dwellings they damaged or destroyed were legitimate military targets. Nor did the Israelis account for their complete incapacitation of Gaza’s water and sanitation infrastructure, or the 73 medical facilities they destroyed.

More generally, the report concluded, “Israeli Defense forces may not have done everything feasible to avoid or limit casualties.” This willful failure to distinguish between military and civilian targets marks a clear violation of the Geneva Conventions.

Crucially, this failure wasn’t a result of negligence on the ground. “The fact that such attacks continued throughout the operation,” the report suggested, “even after the dire impact of these attacks on civilians and civilian objects became apparent, raise concern that the strikes may have constituted military tactics reflective of a broader policy.”

The civilian casualties, in other words, may have been no accident. If that’s true, the report noted that such a policy must have been “approved at least tacitly by decision-makers at the highest levels of the Government of Israel.”

On the Palestinian side, the report found that armed groups had fired rockets indiscriminately toward civilian-populated parts of Israel — a violation of international law in its own right, albeit lesser in impact than Israel’s targeting of Palestinian homes. In addition, the report acknowledged that the tunnels Hamas had dug into Israeli territory to funnel arms and fighters had “increased [the] level of fear among Israeli civilians.”

So while it’s true that the report recognizes “both sides” committed violations, the vast discrepancies in body counts and physical destruction give lie to the false equivalence presented in mainstream media reports. That’s why the Israeli government and its supporters have fiercely protested the UN’s investigation into its conduct, with Prime Minister Benjamin Netanyahu dismissing the UN report as “flawed and biased.”

Such reactions are part of a long pattern for Israel and its supporters of denying UN reports that hold the country accountable for its violations of international law. A similar episode played out following the UN’s “Goldstone report” on Israel’s previous 2008-2009 war on Gaza. That report similarly found that both Israeli armed forces and Palestinian fighters had committed abuses, but again blamed the most serious violations on Israel. Its chair, the respected Jewish South African jurist Richard Goldstone, then found himself the subject of an unrelenting smear campaign by the Israeli government and its allies.

The same is true of Israel’s patrons in Washington. While the U.S. State Department routinely criticizes Israeli actions in its own annual human rights report — and even cited the latest UN report’s findings on Gaza in the 2014 edition — State spokespersons still dismissed the report. “We challenge the very mechanism which created it,” State Department spokesman John Kirby said, arguing that the UN panel showed a “very clear bias against Israel.”

Meanwhile, the process of rebuilding Gaza is going very slowly thanks to the Israeli blockade of the territory — especially its restrictions on building materials. A few months ago, in fact, Oxfam warned that rebuilding the strip would take 100 years if Israel continued its blockade.

No wonder the report’s recommendations call for the Israeli government to “address the structural issues that fuel the conflict.” That means lifting the nearly complete siege that Israel has imposed on Gaza for the better part of the last decade.

The U.S. government rarely imposes consequences for the violations documented in its own reports on Israel, let alone the UN’s reports. Yet on nuclear talks with Iran, at least, President Barack Obama has shown a willingness to buck the Israeli government and its supporters in the U.S. Congress. He should do the same for Gaza.

Even without congressional approval, Obama could make significant changes. At the very least, he could act on his stated interest in “re-evaluating” U.S. support for Israel in the UN, by directing his ambassador to stop reflexively vetoing resolutions that call on Israel to live up to its international obligations. The next step could be conditioning all U.S. military aid to Israel on respect for their human rights obligations.

For children like Anas to rest in peace, and for future generations of Palestinian children to live normal lives, the U.S. must start using some of those options to impose real pressure on its close ally to end these abuses. Otherwise, it’s just enabling them.

Qossay Alsattari is a fellow of the Next Leaders program at the Institute for Policy Studies in Washington, DC.