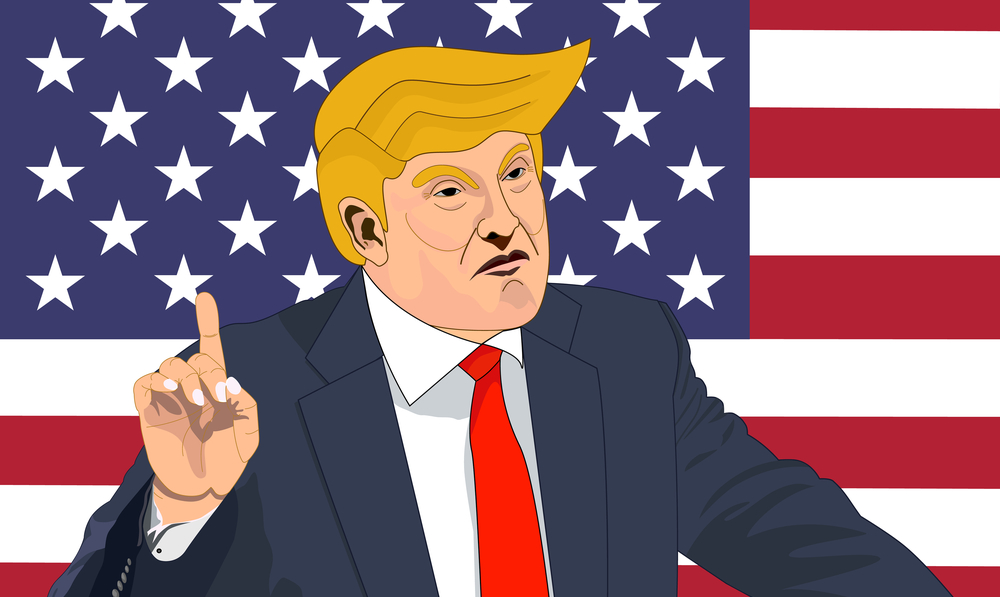 What Will Trump Do to the World to Win Re-Election?

In 2016, Alan Lichtman departed from conventional wisdom to predict a Donald Trump victory in that year’s presidential election. The political scientist was following something he called the “13 keys to the White House.” Using this relatively straightforward metric, Lichtman had correctly predicted the outcome of presidential elections stretching back to 1984.

Trump was so delighted with Lichtman’s unorthodox prediction that, after the election, he sent a congratulatory note.

Last week, Lichtman applied his model to this year’s presidential election. Biden narrowly beat Trump in 7 out of the 13 categories.

With three months to the election, Trump doesn’t have much of a chance to reverse any of the determinations in Lichtman’s test. Of the seven categories that he lost to Biden, the president can’t change the results of the 2018 midterms, erase the numerous scandals that have beset his administration, suddenly acquire the kind of charisma that attracts people outside his narrow base, eliminate the social unrest that has accompanied his rule, or magically revive a cratering economy.

Okay, on that last item, Trump is indeed trying to bluff the economy into a recovery and, in the absence of congressional action on another stimulus bill, use the limited powers of his executive orders as a magic wand. Wall Street might be fooled, but the tens of millions of unemployed are not.

Which leaves the two foreign policy keys in Lichtman’s model. The first, avoiding a foreign policy disaster, tips in Trump’s favor. To my mind, pulling out of the Iran nuclear deal, the Paris climate deal, and the World Health Organization all represent foreign policy fiascos, but Lichtman has in mind a screw-up on the order of the Iraq invasion in 2003.

The second foreign policy key is achieving a major global victory. This, Lichtman points out, Trump has failed to do.

Trump is well aware of Lichtman’s model and track record. He knows that he only has to flip one key to change Lichtman’s prediction. What are the prospects that the president will pull out the stops in an effort to achieve some grand foreign policy success in the final 100 days?

To put it mildly, Donald Trump has not been the most engaged president in U.S. history. He doesn’t pay attention to his briefings. He plays golf while a pandemic rages throughout the land. He has only a vague understanding of the world that exists beyond the global archipelago of Trump Organization holdings.

Most recently, in discussing the explosions in Beirut, Trump falsely opined that it was “a bomb of some kind.” It was yet another flight of fancy from a president who prefers to make things up instead of hewing to the facts or keeping his mouth shut. “Yet aside from some initial concern among Lebanese officials, Trump’s assertions were largely met with a collective global shrug,” reports The Washington Post.

The president who shook up the foreign policy consensus by meeting North Korean leader Kim Jong Un, forging a new economic relationship with China, and embracing a cadre of autocrats in the Middle East has seemingly gone into hibernation. The world knows quite well how royally Trump has screwed up the U.S. response to the coronavirus. Global leaders see the blood in the water. They’re expecting a change in White House occupancy come November.

Seasoned observers of the international scene have concluded that, with little geopolitical leverage, Trump will not be able to pull off any major foreign policy success in the days leading up to the election. There’s little time or political commitment on the ground to push through a peace agreement in Afghanistan that hastens the withdrawal of American troops. The much-vaunted Middle East peace deal that Jared Kushner presented to the UN in February is dead on arrival. Any meetings with North Korea, much less a surprise deal, are off the agenda between now and November. Denmark is not interested in selling Greenland.

That doesn’t leave a lot of options for a president struggling with a raft of domestic issues that are likely to prove more influential in the long run at the polls.

But don’t make the mistake of thinking that a foreign policy success has to be something constructive. Donald Trump is much better at destroying things than building them. He has already asked foreign leaders — in Ukraine, in China — for help in destroying Joe Biden’s reputation. He has looked the other way as Russia has worked to destroy American democracy.

For an encore in November, Trump may well be planning something even more destructive.

Donald Trump has not tried to conceal his antipathy toward Tehran. He has done everything short of war to bring down the Iranian government. He withdrew the United States from the Iran nuclear deal. He applied harsh sanctions to squeeze the Iranian economy. Two years ago, he provided the CIA with new authority to intensify a cyberwar against the country. And, to kick off 2020, he orchestrated the assassination of a top Iranian official, Qasem Soleimani, the head of the Quds Force in the Revolutionary Guard Corps.

Bizarrely, Trump continued to maintain throughout that he still held out hope of negotiating a new deal with Iran.

But last week Brian Hook, the instrument of that policy of continued engagement with Iran in the midst of a punishing cold war, stepped down. Hook was something of a moderate in the very skewed politics of the Trump administration. Indeed, compared to his successor, Hook’s a veritable peacenik.

Replacing Hook as special envoy to Iran is Elliott Abrams. Fresh from his failures to promote regime change in Venezuela, Abrams will likely apply his extremist philosophy to his new portfolio. The first opportunity takes place this week as the administration pushes the UN to extend the arms embargo on Iran due to expire as per the terms of the nuclear deal. It’s part of an effort to destroy any chance of a Biden administration returning to the status quo ante with Iran.

Abrams is assuming his new position at a fraught moment. An explosion took place last month at the Natanz uranium enrichment facility. It was but one of several such mysterious “accidents” that are likely the result of covert Israeli operations. Israeli Prime Minister Benjamin Netanyahu is anxious about the prospect of Joe Biden winning in November and resurrecting some version of the Obama administration’s détente with Iran. So, Netanyahu is getting in his licks while he can, though even he is not interested in a full-scale war with Iran.

For hawks in the United States who were disappointed that the Bush administration didn’t march into Tehran after the invasions of Afghanistan and Iraq, the latest turmoil in the region is encouraging. “Iran has been in a weakened state, its economy hobbled by U.S. sanctions and its regime facing domestic discontent, including a massive protest campaign last fall,” writes Jonah Shepp in New York magazine. “Those protests raised hopes among Iran hawks in the U.S. that their dreams of regime change might soon be realized.”

A war with a major Middle Eastern power is probably not on Trump’s agenda. After all, he’s been pushing for a withdrawal of U.S. forces from the region. And in June 2019, after Iran shot down a U.S. drone, Trump decided not to retaliate, even though a number of his advisors were urging him to do so.

But this time, an election beckons, Trump is down in the polls, and desperate times call for desperate measures. It wouldn’t be the first time that Donald Trump rolled the dice in one last bid for the jackpot.

After experimenting with North Korea, Venezuela, Cuba, and Iran, the Trump administration has decided that China is the most useful adversary to distract attention from the president’s many failures. Just last week, the administration placed new restrictions on TikTok and WeChat, two Chinese social media applications. Microsoft has been in negotiations to acquire part of TikTok’s business, a deal Trump’s actions potentially disrupt.

The administration also announced new sanctions against 11 Chinese and Hong Kong officials over the imposition of the recent national security law in Hong Kong. Included in the list is Carrie Lam, the Hong Kong chief executive. Other recent U.S. sanctions targeting China have focused on the treatment of the Uighur minority, on cybersecurity, and for transporting Iranian oil.

These actions take place against an ominous backdrop: the U.S. closure of the Chinese consulate in Houston in July, high-level complaints about Chinese actions in the South China Sea, and the ongoing attempts to draw together security allies from India to Australia into an Indo-Pacific alliance against China.

And don’t forget the speech by Mike Pompeo last month in which the secretary of state essentially declared the end of engagement with China because it failed to induce “the kind of change inside of China that President Nixon had hoped to induce.”

Actually, Nixon was more interested in driving a further wedge between Beijing and Moscow and opening China up for business. That kind of change is exactly what happened. Democracy and human rights were never really much of a consideration for either Nixon or Henry Kissinger — just as they’re of little interest to Pompeo or Donald Trump.

Pompeo’s speech and the various punitive measures directed at Beijing all amount to a fundamental shift in U.S. policy: not just skepticism about engagement but support for regime change inside China.

As with Iran, Trump is probably not thinking about starting a war with China. But a skirmish in the South China Sea that produces a rally-around-the-flag surge in support of the president could certainly fit the bill for an October surprise.

The U.S. military seems to be preparing for such a contingency, with Pentagon chief Mark Esper effectively drawing a line in the water near China. “The secretary said that the U.S. military is positioning forces to counter Chinese behavior and support U.S. policies, revealing that the U.S. conducted more freedom-of-navigation operations challenging unlawful movement restrictions and excessive claims in 2019 than it has any year in the past four decades,” writes Ryan Pickrell in Business Insider.

Surely, you might be saying, Donald Trump wouldn’t pick a fight with China or Iran just to win an election. Wouldn’t the potential casualties, if nothing else, stay his hand?

But remember, this is a president who has already dismissed more than 150,000 American coronavirus deaths as “it is what it is.”