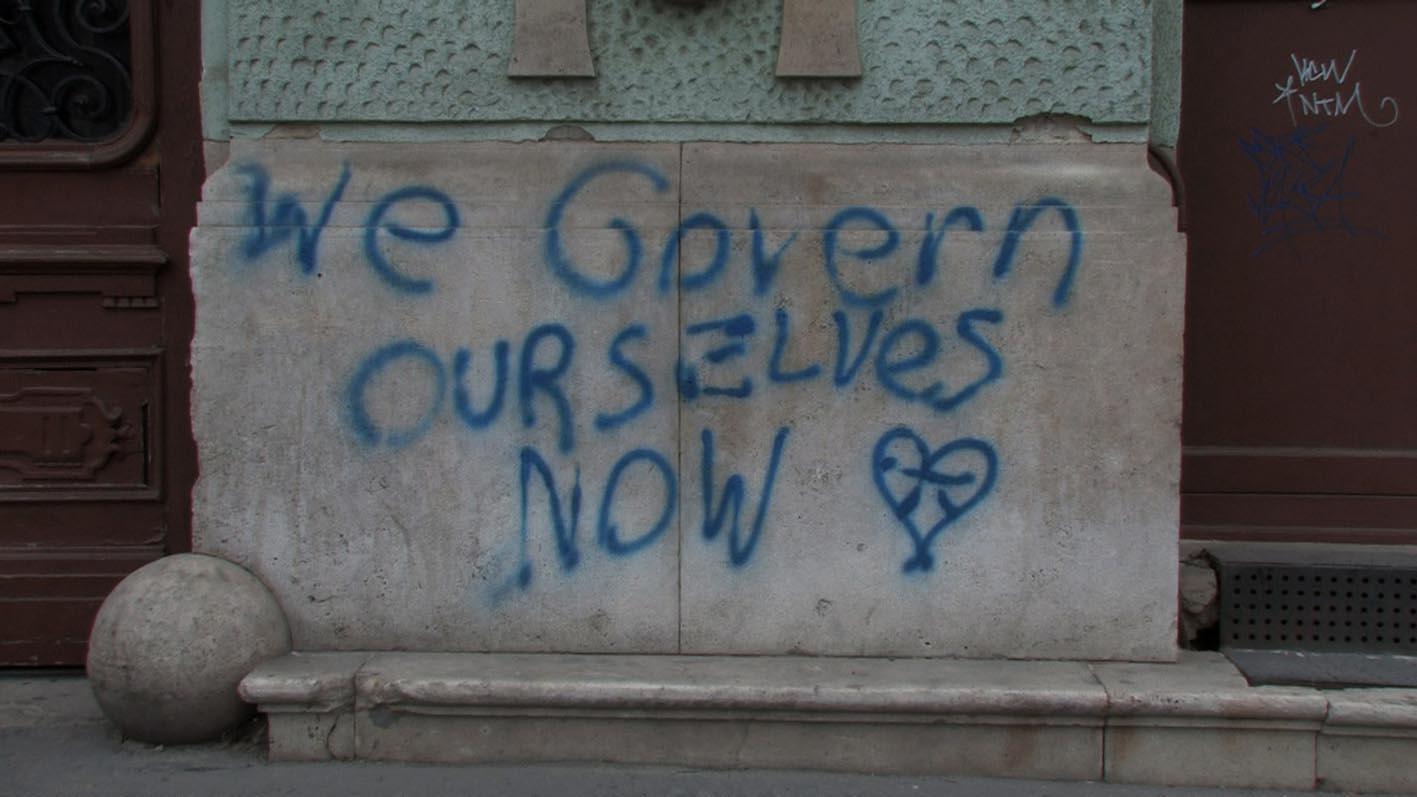 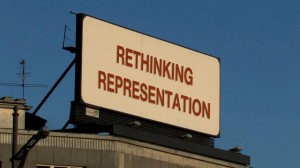 Intentionally blurring the boundaries between art and activism, Vienna-based artist Oliver Ressler has produced a prolific body of explicitly political works. His theme-specific exhibitions, projects in public space, and multi-part video installations embody new methods of global resistance. Through these works, he relentlessly tackles a wide range of critical topics such as racism, economic globalization, and genetic engineering.

Ressler curated A World Where Many Worlds Fit (2008) for the 2008 Taipei Biennial. The title of this exhibition refers to the Zapatistas’ fight for a less hierarchical, more autonomous world. Highlighting the involvement of artists and collectives with the counter-globalization movement, it presents artworks as descriptions of well-known sites of past demonstrations, counter-summits, and blockades, and attempts to create a productive discussion concerning collective political struggle.

A site-specific billboard created for the Passengers Festival in Warsaw, Don’t Purchase a Better World, Fight for a Better World (2008) connects the emergence of gated communities to social disintegration in post-socialist countries. It depicts a building in a gated community, to which Ressler has digitally added broken windows and graffiti from poor and abandoned urban areas. Disrupting the anticipated stability of such protected environments, the image provocatively brings together the worlds of the socially included and excluded, in which, according to the artist, “associations with an uprising or a militant struggle may be evoked.”

The recent screening of Ressler’s ambitious eight-part film project, What Is Democracy? (2009) at 16Beaver in New York City provided a particularly fitting occasion to talk about his investigative artistic practices.

NIELS VAN TOMME: Asking activists and political analysts around the world to reflect on democracy, What Is Democracy? attempts to show a worldwide analysis of the deep political crisis of the democratic model. As your film makes clear, we are in need of a radical new conception of democracy. In which way is such reinvention possible?

OLIVER RESSLER: There are interesting ideas circulating about how to organize a society in a different and more democratic way than is the case today. What Is Democracy? asked this question to people in different cities around the world in order to formulate a critique of representative democracy, and arguments we should take into consideration when starting to conceptualize a new system. Such a new democratic system should have certain institutions, giving people the possibility to get more directly involved with decision-making processes than they do in a representative democracy, which is actually not able to represent people accordingly. It should include the right to decide under which system people would like to live, and would probably lead toward the development of a variety of different models of how societies organize themselves in different corners of the world. I believe that such models should be developed through intense discussions that involve as many people as possible. Powerful social movements should then be ready to struggle for a radical transformation of society and a completely new redistribution of property and power than the one we know today.

VAN TOMME: What was your initial inspiration for this project? How did you start working on such extensive global undertaking?

RESSLER: In 2003 I started a large-scale ongoing exhibition project, Alternative Economics, Alternative Societies (2003-2008), for which I produced 16 video interviews with economists, political analysts, and historians on theoretical models, or concepts, for alternative societies to replace capitalism with. While the people I interviewed for that project were all theorists, What Is Democracy? mostly consisted of interviews with activists. I set forth to discover how far the knowledge about the systematic failures of representative democracy and alternative concepts of democracy are spread around the world, how far these ideas have become democratized. In What Is Democracy? representative democracy is being criticized from different angles in order to represent democratic principles at work.

Starting from January 2007, when I was invited to participate in exhibitions in several interesting cities with parliamentary democracies, I used some of these (paid) trips to carry out the interviews and record the visual material for the film and the installation. It started as a no-budget project, and until the end I recorded all the interviews on my own, with my own camera.

VAN TOMME: Dealing with issues of racism, migration, economics, genetic engineering, and forms of resistance, your artistic practice is highly political in nature. How do you deal with the tension between aesthetic and activist gestures in your work? Do you consider them as inherently contradictory aspects of an overarching artistic project, or as mutually exclusive?

RESSLER: It would be great to overcome the division between activists and artists. I’m interested in working in the field of art, but at the same time I feel the necessity to go beyond that and not limit my work to the art world. I can’t give a general answer regarding the relation between the aesthetic and activist aspects in my work, as they are different from project to project. Some installations obviously stay within the confines of art institutions and I can only try to bring interested people from other contexts into there. But especially the films get a huge audience outside the art world. Activists have the possibility to present them, to use them for their own activities. In the case of the three films I did on the counter-globalization movement, or the films on the political processes in Venezuela, the majority of the screenings were not connected to the art scene at all.

VAN TOMME: Earlier this week, I came upon an interesting quote by Francis Alys: “Society allows (and maybe expects) the artist, unlike the journalist, the scientist, the scholar or the activist, to issue a statement without any demonstration: this is what we call ‘poetic license.'” I’m wondering if such concerns are also important to you while working on your projects?

RESSLER: The majority of my works are not very poetic. Sometimes more conservative members of the art world even question them to be art at all…When I make a statement I also try to provide the necessary background information to that statement. I’m not the kind of artist who likes to play the role of the clown or freak; I want to be taken seriously. I often decide in my work to not make a statement myself, but to create a context, or environment, that allows political activists and analysts to make statements. In these cases, my work is more concerned with editing and combining statements in a structure of a film or an installation. 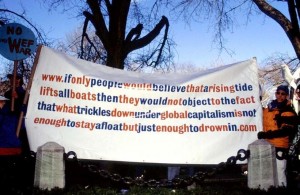 VAN TOMME: Boom! (2001-ongoing), a collaborative project with artist David Thorne, consists of banners designed for anti-capitalist demonstrations. However, unlike the renowned handmade aesthetics of protest art, these banners are highly designed endeavors that echo the aesthetic language of marketing strategies, and are thus deeply rooted in the visual language of capitalism. Are you suggesting that we need to envisage revolutionary practice against capitalism and globalization from within?

RESSLER: The Boom! banners are texts that are being published in the format of (dysfunctional) URL addresses. The initial idea was to start with a kind of repetition of the myths of globalization that appear as if a CEO or conservative politician has depicted them, and that are ironically distorted as the text continues. Maybe this repetition of neoliberal propaganda is the reason why we decided for the banners to have a visual language that is closer to advertisement than to handmade protest imagery. But we also wanted to challenge the dominant language of protest and contribute something to it that did not exist before. And the practice of protest and its visual language has to be questioned permanently. Surprisingly enough, capitalism still exists, so anti-capitalist protest has to improve itself and find new strategies and perspectives of non-parliamentary opposition.

VAN TOMME: I’m wondering if there is any impact you are aiming for with your work? What do you hope that your audience will take away from it?

RESSLER: Many of my projects deal with major issues and include valuable information, but they go beyond pure content delivery. It is very important who is in the speaking position. In several works, grassroots activists of social movements appear as speakers, people that are usually not being heard or listened to. As an artist I’m refusing to take in the role of an expert. My role is to be a sort of catalyst, someone who is not offering technical solutions, but someone who points to possible ways to find them, as curator Marco Scotini described it.

I very often try to realize artworks that also make sense for people who have no particular knowledge about contemporary art. The works should somehow speak for themselves and do not have to be experienced based on the knowledge of specific discourses that are important to the art system. I wish to support progressive social processes, and attempt, through my work, to make a small contribution toward a change in society.

VAN TOMME: Are you currently working on any new projects? 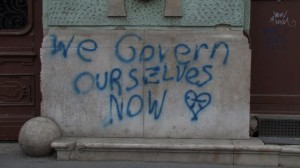 RESSLER: I’m always working on something…The most advanced project is a curatorial one titled Absolute Democracy, which I’m doing in collaboration with artist Carlos Motta. It will be presented as an exhibition at Futura in Prague at the end of the year. The idea of an absolute democracy, as we see it, entails a thorough rethinking of the linear, fixed, and orthodox production of historical knowledge and narratives. It’s an idea that suggests the need for the redistribution of wealth and power and the need for new systems of rule. The exhibition Absolute Democracy presents works by artists who critically investigate, or problematize, “democracy,” as a concept whose social, political, and economic implications play an important role in the formation of individual and collective subjectivity. Some of the artists in the exhibition propose alternative readings of repressed histories, while others denounce traditional structures of discrimination based on gender, sexual orientation, ethnicity, and so on.

Niels Van TommeNiels Van Tomme is associate director of arts and media at Provisions Library. He is also an independent curator, art critic, and contributor to Foreign Policy In Focus.