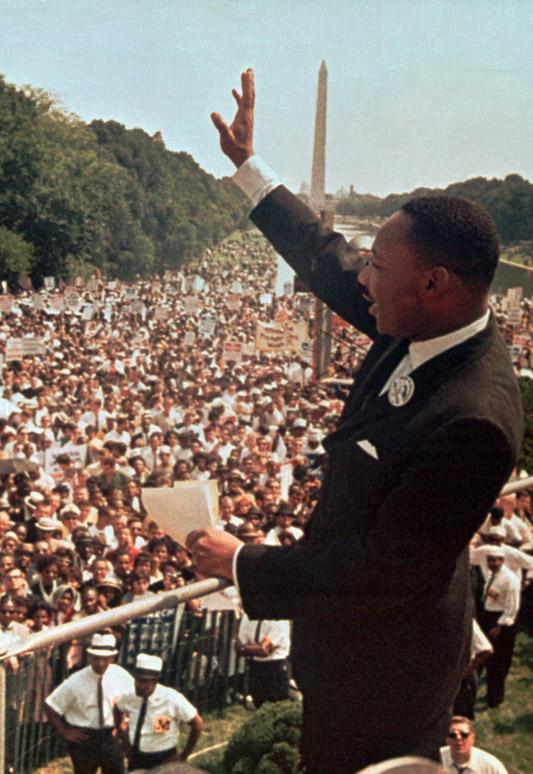 What Would King Say of the Obama Era?

On Obama's second inauguration, let's challenge our society to look at how well we are addressing the "giant triplets" of racism, extreme materialism, and militarism.
By Kevin Martin | January 21, 2013 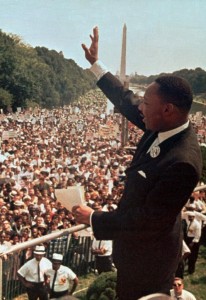 The coincidence that the presidential inauguration should fall on Martin Luther King Day provides much food for thought. Certainly, Barack Obama’s decision to use King’s Bible for his swearing-in ceremony invites progressives to make an unflattering comparison between the two—Norman Solomon did it quite well with his piece “King: I Have a Dream. Obama: I Have a Drone.”

But beyond simply castigating the years behind us or prognosticating about the years to come, there is a broader, riper opportunity in this coincidence. Let’s challenge our society to look at how well we are addressing what King called the “giant triplets,” or the “triple evils,” of racism, extreme materialism, and militarism, which he enunciated most notably in his April 4, 1967 “Beyond Vietnam” speech, exactly one year before his murder. “When machines and computers, profit motives, and property rights are considered more important than people,” he thundered, “the giant triplets of racism, extreme materialism, and militarism are incapable of being conquered.”

Were King alive today, he would be astonished to see how much more exploitative our capitalist system has become. Witness the demise of American labor unions, the offshoring of middle-class jobs to low-wage countries to maximize corporate profits, the worst income inequality since the rober baron heyday of the 1920s, and our ongoing addiction to planet-destroying, unsustainable, and finite energy sources. Not coincidentally, the corporate takeover of our government—accelerated by the Supreme Court’s disastrous “Citizens United” ruling—would likely outrage King, as it ought to all Americans.

And while there certainly are some positive, glass-half-full indicators of racial harmony that we can be proud of—much higher rates of interracial marriage being a significant one, to say nothing of the reelection of America’s first black president—there are many more devastating facts that can’t be ignored. There are more black men in prison than in college, surely one of our country’s greatest shames. Wealth inequality, a more comprehensive measurement of economic health for an individual or family, is even worse for people of color than income inequality, which itself remains sky-high. Our failed policies on immigration, the war on drugs, persistent racial profiling—one could go on and on about the challenges of our deeply rooted sickness of racism.

Even President Obama’s two election victories and the visceral reaction to them are instructive. In 2012 Obama got less than 40 percent of the white vote, and in 2008 just a little more—meaning John McCain and Mitt Romney, two of the worst major party nominees in recent memory (and that’s saying something!) got a lot of votes just for being white. And the hysterical right-wing “We want our country back…” often means “…from that black guy in the White House.”

Meanwhile, most Americans remain in deep denial about the evil of militarism. By any measure, the United States is still, as King termed it in 1967, “the greatest purveyor of violence in the world,” and to further quote and appropriate King’s terrific phrase, the people of Iraq and Afghanistan must doubtless see U.S. troops as “strange liberators,” just as the Vietnamese did.

The United States is military colossus unmatched in history, spending almost as much on war and weapons as the rest of the world’s countries combined. We’re far and away the globe’s number-one arms dealer, and maintain somewhere close to 1,000 foreign military bases (even the Pentagon can’t give a precise number). For comparison’s sake, China just recently opened its first foreign base in the Indian Ocean island of Seychelles.

War has become normalized; ask anyone under the age of 20 if they can remember a time we weren’t at war.

Then there is our domestic culture of violence, which has too many manifestations to name. Our out-of-control gun violence, violence against women and LGBT persons and children, our startlingly violent movies and video games, and our incessant use of war and battle metaphors is just a start.

An extreme example of our country’s delusion about guns and violence was provided recently by Larry Ward, chairman of the “Gun Rights Appreciation Day” planned for inaugural weekend. When challenged about the irony of holding such an event on the MLK holiday weekend, Ward said he thought the event would “honor the legacy of Dr. King,” adding that if African-Americans had had guns, slavery might not have existed in this country. Brevity prevents a full deconstruction of these absurdities, but Ward evidently forgot that King was murdered with a gun.

Clearly the triple evils run deep in our society and don’t just stand alone. They are interlocking and mutually reinforcing. U.S. military and foreign policy is manifestly racist (dating at least to the genocide of First Nations peoples), and mostly driven by corporate interests bound up in economic exploitation. Economic exploitation obviously has a strong racial component as well.

But the point of all this is not to concede defeat to King’s giant triplets—the point is to stimulate analysis, reflection, and ideas for action to address and overcome them. Racism, economic exploitation, and militarism are all human constructs, after all. We are not powerless before any of them.

For example, the Pentagon budget, while gargantuan, will soon begin to decline due to budgetary pressures and the end of the disastrous Iraq and Afghanistan wars. We can begin to rebuild by pushing for deeper cuts to Pentagon pork and putting the savings to work by investing in our communities. Moreover, creating a U.S. foreign and military policy based on widely held values of democracy, diplomacy, human rights, justice, sustainability, peace, and international cooperation—in short, a foreign policy for the global 99 percent—is not only possible; it’s the only antidote to our disease of militarism.

So as we celebrate Dr. King’s 84th birthday, let’s rededicate ourselves to building the Beloved Community he so clearly envisioned. Dismantling the triple evils and replacing them with positive structures and policies would be a great start.