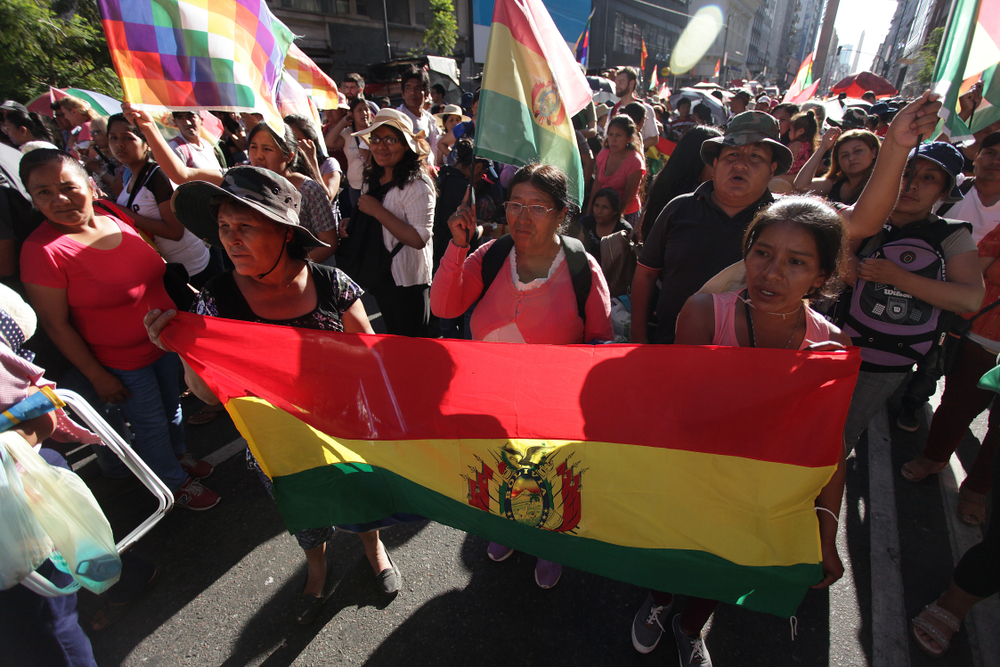 What’s Happening In Bolivia Is a Violent Right-Wing Coup

Progressives need to speak up: Morales made mistakes, but nothing justifies the violent right-wing putsch that followed.
By Laura Carlsen | November 20, 2019

The coup d’etat in Bolivia has divided not only that country but the world.

The mainstream press, the Trump administration, the Washington-compliant Organization of American States, and right-wing governments throughout the region have hailed the ouster of Evo Morales, Bolivia’s first indigenous president.

That’s to be expected. The U.S. has long plotted regime change for Bolivia, a government that not only openly espoused socialism, but set a terrible example — in the still present logic of the Cold War — by succeeding in improving the living conditions of its population while attaining the highest growth rates in the region.

What’s unexpected is the defense of the coup from parts of the left that have refused to call it a coup, and instead insist that the actions of the Morales government led to its own downfall.

The events and the aftermath tell a clear story: There was a coup in Bolivia, which has installed a virulently racist and fundamentalist, anti-women regime, with the full support and planning from the U.S. government and the OAS.

This new regime has no intention of returning to constitutional order (despite claims to carry out elections under its terms), has eliminated separation of church and state, and has already launched multiple murderous attacks on its opponents. Security forces have murdered scores of protesters, mostly indigenous people, as the regime grows increasingly desperate and repressive.

The international community — and progressives — must join quickly in condemning these illegal acts before more people are killed and thrown in prison.

The Calling Cards of a Coup

Bolivia shows the classic traits of a coup.

First, there’s the role of the armed forces. On November 10, military commander Williams Kaliman “suggested” that president Evo Morales, who had just been proclaimed the winner of the 2019 elections — and who had two months remaining on his previous term besides — resign immediately. Hours later, Morales presented a letter of resignation “to avoid these violent events and return to social peace.”

Now, armed forces do not “suggest” that their commander-in-chief resign — their statements were a public threat to the MAS president’s life, and the lives of his cabinet and their families. This threat was backed up by the burning and raiding of the homes of government officials and physical attacks and threats against MAS party members and their families.

Second, there’s the fact of prior planning. Regime change in Bolivia was long planned by the right and the U.S. government. Years ago, the conservative “civic committees” based in the white, wealthy area of Santa Cruz began a strategy of separating from the nation ruled by a very popular indigenous, leftist president. The U.S. embassy supported the civic committee of Santa Cruz and other opposition groups, betting on the balkanization of the country.

When that strategy failed, they began to develop a plan to foment conditions for a military coup. A November 2007 Wikileaks cable from the U.S. embassy in Bolivia noted encouragingly: “There are strong indications that the military is split and could be quite reticent to follow orders.”

General Kaliman was sent as a military ataché to Washington in 2013 and previously trained at the infamous School of the Americas. The police chief who betrayed the government the day before also received training in Washington. Luis Fernando Camacho, leader of the Santa Cruz civic committee and the emerging leader of the 2019 coup, has also received direct funding and support from the U.S. government.

Trump’s instant recognition of the coup regime was openly celebratory even as violence gripped the country. He stated triumphantly:

“The United States applauds the Bolivian people for demanding freedom and the Bolivian military for abiding by its oath to protect not just a single person, but Bolivia’s constitution. These events send a strong signal to the illegitimate regimes in Venezuela and Nicaragua that democracy and the will of the people will always prevail. We are now one step closer to a completely democratic, prosperous, and free Western Hemisphere.”

In the Cold War that never ended, what matters is maintaining U.S. hegemony, not democracy and legality.

Third, there’s the effort to legitimize the coup using supranational institutions. In this case, the Organization of American States played a conscious, biased, and blatant role.

Its first act was to issue a statement questioning the vote just hours after the polls closed, with the obvious intention of delegitimizing the elections. This is an unacceptable act for a responsible electoral mission. The preliminary OAS report shows a lack of professionalism in its statistical analysis, as experts from the Center for Economic and Political Research have pointed out. It does not distinguish between the non-binding rapid count system and the official binding count.

Yet the report was key in detonating the political crisis. The OAS now has blood on its hands, and the international community must demand a full investigation into its actions and their contributions to illegal acts, violence, and conflict — the opposite of its mandate in the region.

Meanwhile, the national and international press carried images of Bolivians celebrating the coup and the president’s departure. The majority who voted for Morales disappeared almost completely from mainstream coverage, along with demonstrators against the coup — despite the mounting dead. Only in recent days, with Amnesty International and other human rights groups issuing strong statements against the regime’s violent repression and imprisonment of opposition members, has the press begun to report on the crackdown on protests against the coup.

Fourth, there’s everything that’s happened since the overthrow itself, which points to stark authoritarian tendencies. President Morales offered new elections when the protests broke out, eliminating all political justification for his ouster. But the opposition, already smelling blood, decided to go in for the kill instead. In control of the security forces and with the Trump administration at its back, it rejected any offer of dialogue.

Democracy does not exist when an individual from a party that has never won more than 5 percent of the vote, who is fifth in the line of constitutional succession, takes power in a country where the army is in the streets. Yet this is Jeanine Añez, the figure who proclaimed herself president — without naming one single indigenous person to her cabinet — and immediately empowered security forces to use lethal force against the growing opposition.

The Cold War Lurches On 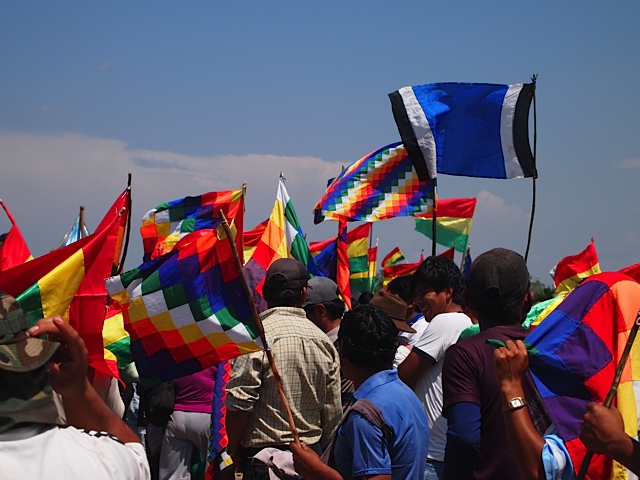 It is ironic that the crisis in Bolivia coincided with the 30-year anniversary of the fall of the Berlin Wall.

The fall of the wall ended the Cold War, but not the Cold War mentality. The use of an alleged communist or socialist threat to justify crushing democracy and self-determination blinds clear analysis. On social media, many coup supporters celebrated Morales’s fall with the phrase “one less!” — as if the anti-communist dominos game continues, and human rights and democracy don’t matter.

Bolivia has shown us that no one has the right to co-opt the name of “the people” to justify violent domination. This tactic has been all too common on the right, the anti-Evo left, and in certain MAS statements as well. Pundits and politicians speak of  “the people” as if to sanctify their point of view.

Bolivia is divided. A majority can be measured by the poll results, where Evo Morales won by what could be considered a landslide, with only the difference between 9 and 10 percent of his lead disputed. La Paz is filled with his mostly indigenous supporters protesting the coup. But sizable populations and major organizations demanded his resignation following the OAS election report, including the Bolivian Workers Organization COB — which called for Morales’ resignation and later changed course to demand a return to constitutional order when the coup regime came to power.

No doubt, Morales made serious mistakes — it’s clear that his decision to seek a fourth term after losing a reform referendum was extremely costly.

But in no way does that justify a coup — and in particular a racist and vengeful right-wing government that, if left in power, will strip away all the progress Evo’s government made. The future of Bolivia under a spurious right-wing government under such figures such as “macho Camacho,” who trained with neo-fascist shock troops, and U.S.- trained military men would be a tragedy.

Today, Bolivia has a self-proclaimed president who took office in an impromptu and illegal ceremony in which General Kaliman strangely repeated the phrase “mission accomplished.” The Bible is installed in the National Palace and the Pachamama expelled. There are video testimonies that the president’s followers are being hunted down and arrested or hurt. The number of political prisoners is unknown.

The Inter-American Commission on Human Rights has meanwhile condemned “the excessive use of force by the security forces” and their “widespread persecution campaigns” on behalf of the coup. More than 25 deaths have been reported, and hundreds injured. Indigenous leaders and journalists report physical attacks on women wearing traditional indigenous pollera skirts and the burning of the whipala, the nation’s indigenous emblem.

It’s important to understand how Evo Morales lost the support of significant groups of feminists, indigenous people, and workers — once his base. It is also important to criticize his government’s reliance on extractive industry, which damages the land, communities, and the future. We must continue to build processes from below to break patriarchal dynamics and face down predatory capitalism.

But at this moment there is an urgent challenge: a coup d’etat that has granted unchecked power to the fundamentalist ultra-right. This is an indisputable fact that endangers the lives of the indigenous peoples these new rulers despise.

The new regime endangers the lives of women, whose bodies they claim as their dominion. It endangers the rights of nature, which they believe exists only to be a source of personal wealth. The widespread violation of human rights in the first days of this regime proves it would be a major disaster for all basic rights — including indigenous rights, women’s rights, and life itself.

In Bolivia, violence reigns. Countries throughout the world must formally recognize the threat the Bolivian coup poses to the basic principles of democracy, condemn the coup, and  formally call for the defense of laws, human rights, and peace.

There is no time to lose.