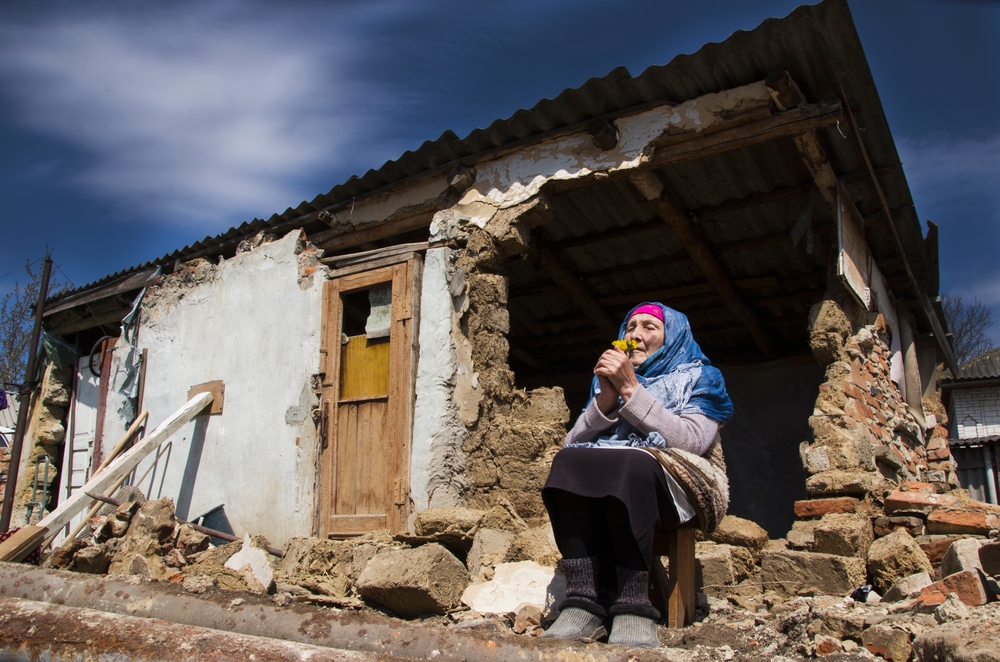 Israel, the United States, and Russia are just three of the many governments that have deliberately targeted civilians in their efforts to win wars.
By Stephen R. Shalom | October 27, 2022

For centuries, civilians have been the victims of terrible war crimes. Sometimes they have been in the wrong place at the wrong time. But often they have been directly targeted for purposes of ethnic cleansing, revenge, denying rebels a base of supporters, or terrorizing a government into surrendering.

Recently, another historical instance of such an atrocity has been confirmed. In 1948, Israeli forces used bacteriological warfare—spreading typhus and dysentery bacteria—against the Arab population of Palestine in order to encourage them to flee and to prevent them from returning to their villages.

Can we believe such claims? To be sure, charges of biological warfare have often been leveled as part of disinformation campaigns. For example, Russia claimed when it invaded Ukraine earlier this year that it was trying to secure bio-warfare labs in Ukraine set up by the United States (perhaps trying to duplicate U.S. lies regarding weapons of mass destruction when Washington invaded Iraq in 2003). The Russian claims have been thoroughly debunked despite being amplified by Tucker Carlson, rightwing podcasters, Grayzone, and other Putin apologists).

But the evidence regarding Israeli use of biological agents against Palestinian civilians comes from Israeli government archives and related memoirs, letters, and interviews as collected in a scholarly article by two respected Israeli historians, Benny Morris and Benjamin Z. Kedar. Morris, professor emeritus at Ben Gurion University, was one of the original New Historians who challenged Israeli government mythology. Although he has moved sharply to the right in the past two decades, he hasn’t retracted any of his earlier findings. Kedar, is professor emeritus of History at the Hebrew University of Jerusalem and former vice president of the Israel Academy of Sciences and Humanities.

In their study, published in the respected academic journal Middle Eastern Studies, Morris and Kedar show that Israeli forces planned to spread disease bacteria into Arab water supplies. The operation was personally initiated by General Yigael Yadin, the head of operations and acting chief of general staff of the main Israeli military force, the Haganah, “undoubtedly with Ben-Gurion’s authorization.” Moshe Dayan, the Haganah General Staff’s Arab Affairs Officer, personally delivered the bacteria to Haganah officers around the country. Israeli agents poured flasks of typhoid bacteria into the water supply of the Arab town of Acre, causing an epidemic of the disease, with some deaths. Reports by “Israeli officers and officials attributed the ease with which Acre fell to the Haganah in part to the demoralisation caused by the epidemic.”

The operation as a whole did not get very far. In Gaza, the Egyptians captured two Israeli agents involved in the operation. In some areas, left-wing Israeli officers refused to cooperate. But in general, the Israeli forces found other means of carrying out their ethnic cleansing of Palestinians. Using terror and violence, they ultimately drove out half of the population.

Morris and Kedar detail the lengths to which Israeli officials went to try to hide their actions, showing the latter’s awareness of their crimes. After all, two decades before this operation, the Geneva Protocol banned the military use of bacteriological agents. Israel is still one of only a handful of countries to refuse to sign a new biological weapons ban. It has used biological agents several times to try to assassinate its enemies. And, of course, Israel has continued to attack Palestinian civilians and their homes, making their lives as miserable as possible as part of its agenda of ethnic cleansing in support of constructing a Jewish supremacist state.

Other Cases of Governments Targeting Civilians

Israel has not been the only government to target civilians. In its war in Indochina, the United States unleashed an unprecedented level of explosives and chemicals on the Vietnamese countryside, not in order to destroy enemy soldiers or military objects but to drive the population from their villages so they would be unavailable to support the National Liberation Front. As Harvard professor Samuel P. Huntington put it in Foreign Affairs in 1968, U.S. bombing had caused “forced draft urbanization”:

In an absent-minded way the United States in Viet Nam may well have stumbled upon the answer to “wars of national liberation.” The effective response lies neither in the quest for conventional military victory nor in the esoteric doctrines and gimmicks of counter-insurgency warfare. It is instead forced-draft urbanization and modernization which rapidly brings the country in question out of the phase in which a rural revolutionary movement can hope to generate sufficient strength to come to power.

Likewise in Syria, Russia deliberately targeted medical facilities as a way to drive out the population that supported the rebels.

In other cases, bombing civilians was designed to cause such misery that the enemy would be forced to concede defeat. During World War II, Dresden and Hiroshima were not military targets, but their destruction was intended to compel the German and Japanese governments respectively to surrender.

In Ukraine today, civilians caught behind Russian lines have suffered horrendous violence as part of Moscow’s effort to subdue the population. Starting in October, however, the Russians have begun launching missiles and drones against civilian targets across the country in attacks designed explicitly to cause massive suffering of the population in the lead up to winter.

In a discussion on Russian state TV, two Russian lawmakers candidly explained the logic of the attacks. The two, both members of Putin’s ruling United Russia Party, agreed that Moscow should focus on cutting off Ukraine’s electricity supply so that its people have no access to heat, running water, or refrigerated food. One of them, Andrey Gurulyov, a deputy in the State Duma, said: “The absence of electricity means the absence of water, the absence of refrigerators, the absence of sewer….One week after all electricity is cut off, the city of Kyiv will be swimming in s***, pardon my expression. There will be a clear threat of an epidemic.”

Pressed by another panelist that Russia ought to attack Ukraine’s military instead, Gurulyov shot back:

If you have no water, no sewer, we’re projecting the flood of refugees towards Western borders, correct? Because it’s impossible to survive, there is no heating, no water, no sewers, no lights. You can’t cook food, no place to store the food, there is no way to transport the food, the monetary system does not work and so on and so forth. How does one live in a country where nothing works. If there are no jobs, who will pay anyone?

In short, on top of the day-to-day murders, torture, disappearances, and rapes in occupied zones, in addition to the forcible transfers of civilians to Russia, including the “adoption” of thousands of children there, as well as attacks on civilian aid convoys that Amnesty International called “further proof of Russia’s utter disregard for civilian lives in Ukraine,” and indiscriminate attacks on cities, Russia now aims to make the daily life of the civilian population unbearable.

These attacks on critical civilian infrastructure are war crimes. In Amnesty International’s words:

Russia’s targeting of Ukrainian civilian infrastructure is unlawful. The morale of the civilian population is not a lawful target, and carrying out these attacks with the sole purpose of terrorizing civilians is a war crime. All those responsible for ordering and committing these criminal attacks must be held to account. With Russia ramping up its efforts to terrorize civilians in Ukraine, the international community must urgently respond and condemn these heinous attacks.

The good news is that the historical record suggests that terror bombing rarely succeeds. The awful news is that many thousands more civilians may die in the coming winter months because of it.

In denouncing these horrendous attacks on civilians, however, it is important to keep in mind that every Ukrainian—civilian or soldier—who dies as a result of the unjust Russian invasion is the victim of a war crime. Had Putin not illegally and immorally ordered his troops into Ukraine, all those Ukrainians who took up arms in self-defense and were killed would still be alive. Their deaths, too, are terrible crimes, crimes that deserve the strongest condemnation.

Stephen R. Shalom is a member of the New Politics editorial board and of Internationalism from Below.