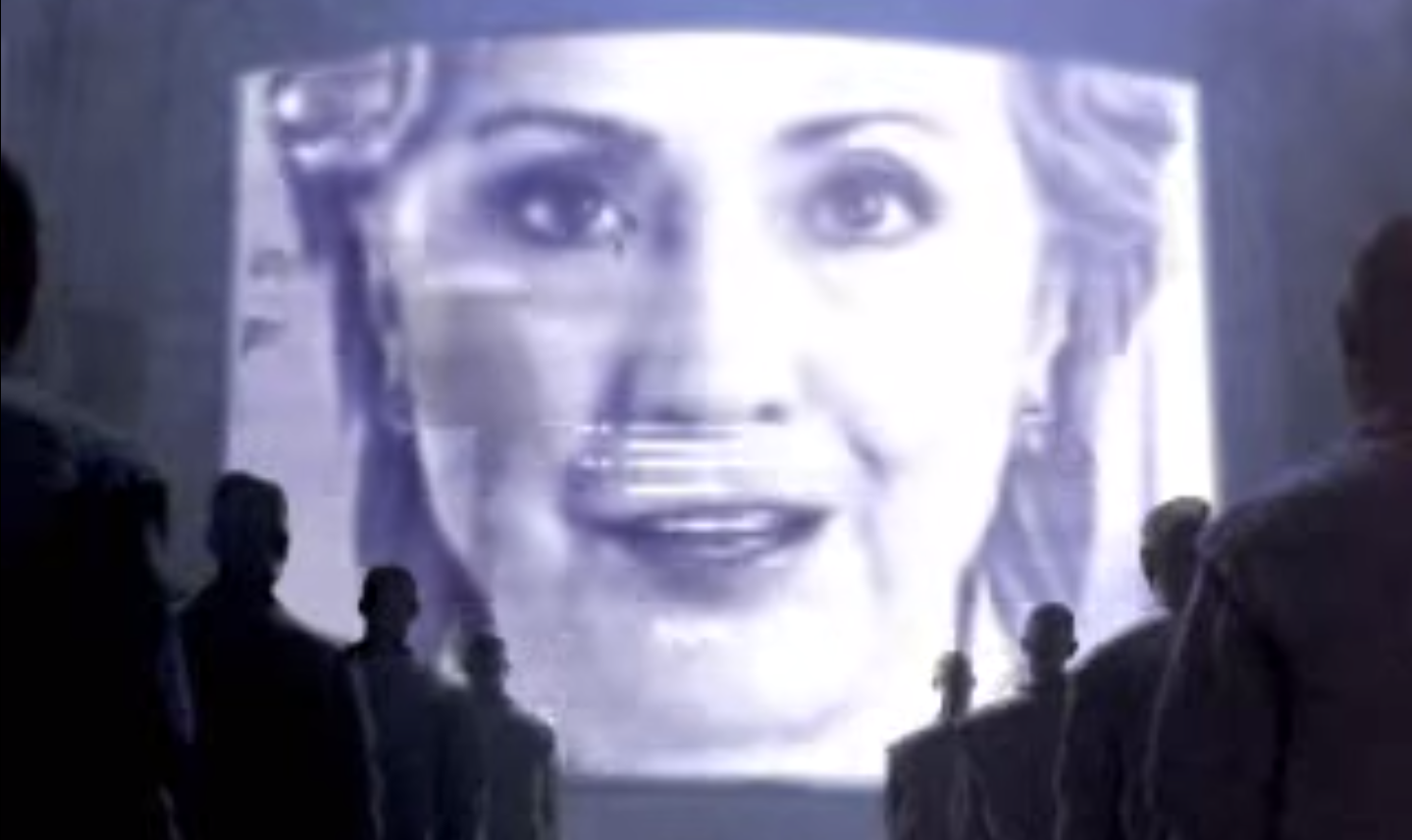 Hillary Clinton will abandon her knee-jerk America Firstism only if she is pushed in that direction by the world, by circumstances, and by those of us in the United States who realize that America the over-armed and under-cooperative doesn’t cut it for the 21st century. (Image: "Vote Different")

When Hillary Clinton Pitched the Iraq War to CodePink

Announcing her latest campaign for the presidency, Hillary Clinton declared she was entering the race to be the champion for “everyday Americans.” As a lawmaker and diplomat, however, Clinton has long championed military campaigns that have killed scores of “everyday” people abroad, from Iraq to Yemen.

As commander-in-chief, there’s no reason to believe she’d be any less a hawk than she was as a senator, when she backed George W. Bush’s war in Iraq, or as secretary of state, when she encouraged President Barack Obama to escalate the war in Afghanistan. If her nomination is as sure a thing as people say, then antiwar organizing needs to start right away.

Hillary’s already won the support of those who continually agitate for war. “I feel comfortable with her on foreign policy,” Robert Kagan, a co-founder of the neoconservative Project for the New American Century, told The New York Times last summer. “If she pursues a policy which we think she will pursue,” he said, “it’s something that might have been called neocon, but clearly her supporters are not going to call it that; they are going to call it something else.”

We’re going to call it what it is: More of the same sort of murderous policies that destroyed Iraq, destabilized Libya, killed women and children with cluster bombs and drones in Yemen, and legitimized the undermining of democracy in Honduras. There’s little chance the Republicans will nominate someone better, but given Clinton’s record as a senator and secretary of state — the latter giving us a very good idea of how she would approach foreign affairs once in office — it will be hard for them to find anyone much worse.

We know that Clinton is no reliable friend of peace. Today she supports diplomacy with Iran, but back in 2009, as secretary of state, she was adamant that the U.S. keep open the option of attacking the Islamic Republic over never-proven allegations it was seeking nuclear weapons. (In fact, Israel is the region’s only nuclear power.)

Her attempts to portray herself as an ally of those who are pro-peace, as a sort of reluctant imperialist, is the same sort of co-opting distortion that has helped quiet opposition to President Obama’s hawkish agenda. If anything, Hillary is even more militaristic than the ostensibly reluctant warrior she’s campaigning to replace. Still, that hasn’t stopped her from trying to be all things to all people — even people like us.

Indeed, in March 2003, Clinton did something she’ll probably never willingly do again: She met with CODEPINK to explain her support for the Iraq war. “I like pink tulips around this time of the year,” she began. They “kind of remind ya that there may be a spring. Well, you guys look like a big bunch of big tulips!” It got progressively more awkward after that. “I admire your willingness to speak out on behalf of the women and children of Iraq,” said Clinton, but “There is a very easy way to prevent anyone from being put into harm’s way and that is for Saddam Hussein to disarm and I have absolutely no belief that he will.”

We thought the easiest way to prevent harming the women, children, and other living things in Iraq was to stop a war of aggression, ostensibly over weapons of mass destruction that UN inspectors on the ground couldn’t find and which were, in fact, never found — because they didn’t exist. Clinton, however, was steadfast: “If Saddam were serious about disarming he would have been much more forthcoming,” she claimed. “The very difficult question for all of us is how does one bring about the disarmament of someone with such a proven track record of a commitment, if not an obsession, with weapons of mass destruction?”

Her answer: Destroying Iraq by dropping millions of U.S.-made WMDs, including bombs with depleted uranium that have more than doubled the country’s pre-2003 rate of cancer. Speaking to the women of CODEPINK, Clinton even explicitly defended George W. Bush’s unilateralism, citing her husband’s go-it-alone intervention in Kosovo back in the 1990s.

In 2011, when the Arab Spring came to Libya, Clinton was the Obama administration’s most forceful advocate for going above and beyond a no-fly zone to depose Muammar Gaddafi, whose U.S.-trained security forces were killing Libyans with the help of weapons and equipment provided by his erstwhile allies in the United States, Britain, and France.

She even out-hawked Robert Gates, the defense secretary first appointed by George W. Bush who was less than enthusiastic about going to war. When Libyan rebels carried out an extrajudicial execution of their country’s former dictator, her response was sociopathic: “We came, we saw, he died,” she said, smiling and laughing. That sent a message that the United States would look the other way at crimes committed by allies against its official enemies; indeed, it was the same policy of tolerance for friends’ war crimes that arguably led Gaddafi to believe he could get away with killing anyone he labeled “al-Qaeda.”

Libya was part of a pattern for Clinton. On Afghanistan, she advocated a repeat of the surge in Iraq, encouraging President Obama to more than double the number of troops there. Her State Department also provided cover for the expansion of the not-so-covert drone wars in Pakistan and Yemen. Clinton’s top legal adviser, Harold Koh, exploited his pre-government reputation as an advocate for human rights to declare in a 2010 speech that not only did the government have the right to detain people without charge at Guantanamo Bay, but it can kill them with unmanned aerial vehicles anywhere in the world.

Clinton practiced “soft power” diplomacy too, of course: After Honduran forces trained at the U.S. School of the Americas carried out a coup against elected president Manuel Zelaya, Clinton’s State Department immediately got to work on legitimizing the regime that seized power. As commentator Mark Weisbrot observes, she even said as much in her book, Hard Choices: “In the subsequent days [after the coup] I spoke with my counterparts around the hemisphere, including Secretary [Patricia] Espinosa in Mexico,” wrote Clinton. “We strategized on a plan to restore order in Honduras and ensure that free and fair elections could be held quickly and legitimately, which would render the question of Zelaya moot.”

The subsequent “free and fair” election would end up being between two candidates who supported a coup opposed by most “everyday people” in Honduras, now one of the most violent, drug-war ravaged countries in the world. Clinton has also called for deporting child refugees fleeing that violence. In Honduras, as elsewhere, it seems it’s not the lives of “everyday people” that are of chief concern to politicians like Clinton.

When Barack Obama became president, the anti-war movement became his first casualty — followed by a group of Pakistanis droned to death three days after his inauguration. We should never lose hope that we can bring about positive change, but actually changing the world for the better requires being aware that whoever sits in the White House come January 2017 is not going to be our friend.

Charles Davis is a writer in Los Angeles. His work has been published by outlets such as Al Jazeera, The New Republic, and Salon. Medea Benjamin is the co-founder of the peace group CODEPINK and the human rights organization Global Exchange. She is also the author of Drone Warfare: Killing by Remote Control.