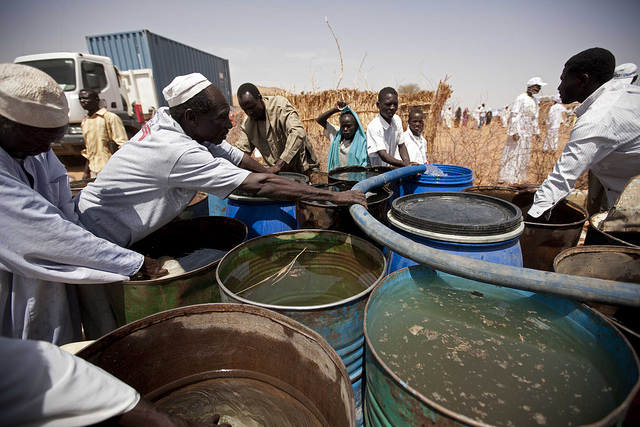 Global warming can lead to wars for resources similar to the one that Hitler waged on Russia. Pictured: Water distribution in Darfur. (Photo: UNAMID / Flickr Commons)

When It Comes to Global Warming, Godwin’s Law May Actually Apply

Denying global warming can leave one open to legitimate comparisons with Hitler.
By Russ Wellen | September 24, 2015

As global warming worsens, the world may see states or other groups warring over diminishing resources, especially food and water. But first allow us to interject the definition of Godwin’s Law, of which you may have heard. It holds: “As an online discussion grows longer, the probability of a comparison involving Nazis or Hitler approaches 1.” What does global warming have to do with Hitler?

Timothy Snyder is the author of the classic Bloodlands: Europe Between Hitler and Stalin and a new book Black Earth: The Holocaust as History and Warning. In an op-ed for the New York Times on September 12, he writes:

The war that brought Jews under German control was fought because Hitler believed that Germany needed more land and food to survive and maintain its standard of living — and that Jews, and their ideas, posed a threat to his violent expansionist program.

Snyder is speaking of Nazi Germany’s invasion of Russia motivated partly because Hitler wanted Ukraine farmland to feed Germany. Jewish scientists posed a threat in part because they were privy to techniques that could maximize agriculture in Germany, thus obviating the need to invade Russia. Snyder explains:

The quest for German domination was premised on the denial of science. … In Hitler’s “Second Book,” which was composed in 1928 and not published until after his death, he insisted that hunger would outstrip crop improvements and that all “the scientific methods of land management” had already failed. No conceivable improvement would allow Germans to be fed “from their own land and territory,” he claimed. Hitler specifically — and wrongly — denied that irrigation, hybrids and fertilizers could change the relationship between people and land.

… contemporary environmental stresses could encourage new variations on Hitler’s ideas, especially in countries anxious about feeding their growing populations or maintaining a rising standard of living.

… Hitler spread ecological panic by claiming that only land would bring Germany security and by denying the science that promised alternatives to war. By polluting the atmosphere with greenhouse gases, the United States has done more than any other nation to bring about the next ecological panic, yet it is the only country where climate science is still resisted by certain political and business elites. These deniers tend to present the empirical findings of scientists as a conspiracy and question the validity of science — an intellectual stance that is uncomfortably close to Hitler’s.

Thus does one of America’s most respected scholars and historians — ba-da-boom! — compare climate deniers to Hitler.