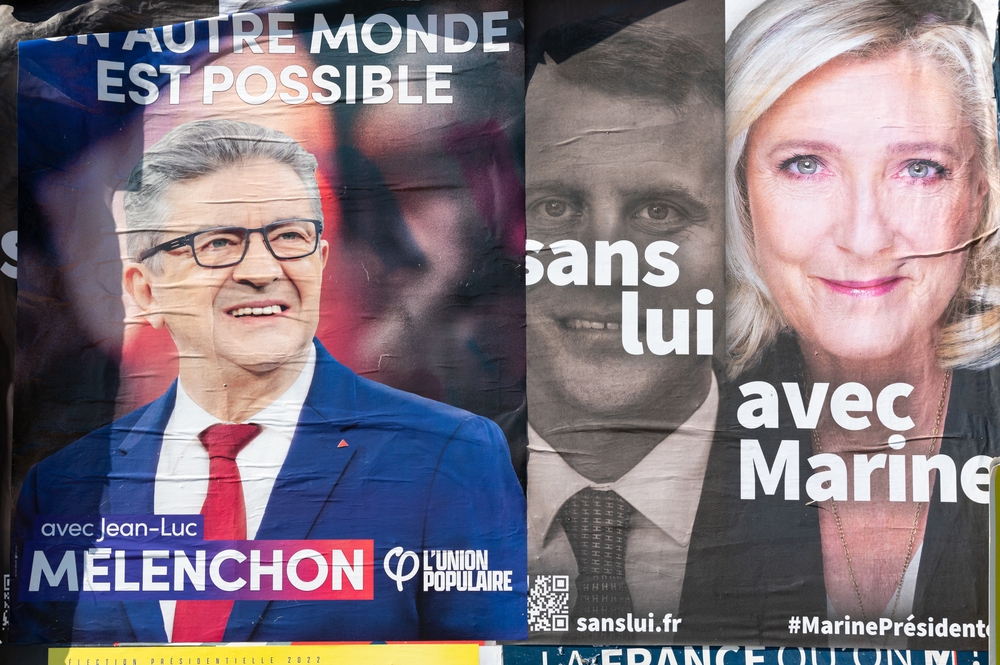 When the Left is Right…Far Right

How is it possible that so many left voters in France are willing to choose a far-right candidate in the second round of the presidential elections?
By John Feffer | April 13, 2022

In the twentieth century, the left defined itself as anti-fascist. It was against Franco in Spain, Hitler in Germany, and Mussolini in Italy. During the Cold War, progressive opposed far-right dictators like Augusto Pinochet in Chile and Ferdinand Marcos in the Philippines. It mobilized against neo-Nazis in Germany, right-wing militias in the United States, and fascist formations elsewhere in the world.

Fighting the forces of reaction is still an article of faith for many progressives. But others on the left are making a leap of faith—all the way over to the other side of the political spectrum.

The latest example of this phenomenon is this month’s elections in France where President Emmanuel Macron and far-right candidate Marine Le Pen gathered enough votes to advance to a second round. The left-wing candidate Jean-Luc Mélenchon came in a close third, which means that his support will play a pivotal role in deciding the winner of the next round.

If you add together Macron’s nearly 28 percent in the first round and Mélenchon’s 22 percent—plus voters who supported center-left and center-right candidates—the French president will coast to a second term.

But the math doesn’t work out that way. Only 36 percent of Mélenchon voters are committing to back Macron, while 27 percent have pledged to pull the lever for Le Pen.

The horrifying truth is that more than one-fourth of the supporters of a leftist candidate are getting ready to support a politician who’s only a hair’s breadth away from fascism.

The situation has only gotten worse since the last presidential election in 2017. At that time, only 7 percent of Mélenchon supporters were interested in backing Le Pen in a similar second round match-up against Macron. Five years ago, Macron easily won that second round by outpacing Le Pen 66 percent to 33 percent. This time around, Macron is slated to win by a much narrower margin: 51 percent to 49 percent. However, a bad debate performance by the incumbent, a poor turnout among liberals, or an even more disastrous turnabout by the left could result in a French result as shocking as the outcome of the Brexit referendum or Donald Trump’s win in 2016.

Of course, the fickleness of the French left is nothing new. The National Front—the former name of Le Pen’s National Rally party—was notorious for canvassing support from Communist strongholds to win power locally. At its conventions, the party has showcased prominent Communists who have switched sides—like Fabien Engelmann, a National Rally mayor who described his political journey in the book From Leftism to Patriotism. Meanwhile, the Socialist Party’s embrace of neoliberal economic reforms and its subsequent collapse throughout the country provided an enormous opportunity for Le Pen to appeal to disgruntled socialists.

Nor is the susceptibility of left voters to far-right populism unique to France. One of the most astonishing statistics from 2016 is the 12 percent of people who supported Bernie Sanders in the Democratic primary who ended up voting for Donald Trump in the general election. The percentage of whiplash voters may only have increased in 2020.

Then there are the authoritarian leaders who pretend to be on the left—Duterte in the Philippines, Ortega in Nicaragua—and attract the support of (some) leftists inside and outside their countries. On top of that are the authoritarian leaders who don’t pretend to be on the left, like Vladimir Putin, but who still have inspired warm and fuzzy feelings among leftists (like Melenchon) for standing up to NATO and the United States.

For those who believe that the political spectrum is actually a circle, with the far left and the far right bending around to meet each other on the dark side, the oxymoronic supporters of Sanders-Trump and Mélenchon-Le Pen make perfect sense. But this belief in the convergence of extremists is little more than a pox-on-both-houses aspersion cast by dismissive moderates.

The reason for the overlap is actually more interesting—and central to any understanding of politics in an age of globalization and infotainment.

A Disgust for Liberalism

Compared to the twentieth century when the center left and the center right sniped at each other but regularly rotated in power, today’s political arena increasingly resembles a doughnut. There’s a lot going on around the periphery but not much in the middle.

Liberal centrism is on life support in many countries around the world. The reasons are manifold.

The first reason is economic. Over the last half-century, liberals by and large embraced economic globalization, namely the liberalization of trade, the reduction of government intervention in the economy, and (directly or indirectly) increased power for transnational corporations. This globalization has enriched a small class of billionaires, pulled some out of poverty (especially in China), and provided the middle class with tons of cool things (thank you, Apple!). But it has not done much for a sizeable group of workers and those on fixed incomes.

This latter category of folks would ordinarily support the left because of its enthusiastic backing of unions and state-sponsored social programs. But the left has failed to hold onto many of these voters—in some cases because it also supported globalization (as with the Socialist Party in France), in others because it began to focus less on economic issues and more on identity politics. Either way, the far right swooped in to scoop up the disgruntled.

The globalization project was so indelibly connected to centrist politicians of the left and right that voters who’d been left behind by the cataclysmic economic changes came to despise the entire political elite, which the far right handily labelled “globalists.” This disgust for established parties and politicians, accentuated by real charges of corruption and false charges of child-abuse rings, could have been a boon for the anti-globalization left. Instead, because it had more money, stronger institutions, and greater ruthlessness, the far right took advantage of this political opportunity.

Part of the globalization package, which included the reduction of barriers to the free movement of capital across borders, has been its association (sometimes real, sometimes imaginary) with a more permissive attitude toward the flow of people across borders. In the United States and Europe, in particular, liberalism has often gone hand in hand with more liberal immigration policies. The far right, unified in its racism and xenophobia, used fear of the other to hoover up even more disaffected voters.

A final contributing factor, though perhaps not as central as the first three, is the ecological critique of the center. The liberal status quo has been killing the planet through policies of unconstrained economic growth and, more recently, lukewarm decarbonization strategies. Some Green parties have been able to attract voters who’ve had enough of the “blah-blah-blah” climate policies of the established parties. Increasingly, however, eco-fascists are competing for those voters.

The abandonment of the center, in other words, does not reflect mere petulance or a preference for extremism. It is often a very deliberate choice based on perceived self-interest. The status quo was not working for a whole lot of people. It’s no surprise that they are now rejecting that status quo.

The most common sentiment expressed by Le Pen voters, as with those who supported Trump and Bolsonaro, is a desire to see their candidate “shake things up.” This yearning for radical change derives in part from the aforementioned disgust with the status quo. But there is also a not-so-hidden desire for entertainment, as if politics were a reality TV show that had become pat and predictable. The ratings were in free fall until an outrageous trickster came along—Trump, Johnson, Duterte, Bolsonaro—who made everyone gasp and laugh and, above all, pay attention.

In its own serious fashion, the left too is committed to shaking things up. That’s what makes both Bernie Sanders and Alexandria Ocasio-Cortez such interesting and invaluable politicians. But the far right, untethered to any sense of decency or truthfulness, can play an even more visibly disruptive role. Think of the way Marjorie Taylor Greene, Lauren Boebert, and Madison Cawthorn have turned the House of Representatives into a surrealist funhouse.

But how truly disruptive are these rhetorical iconoclasts? Donald Trump made headlines by dissing NATO, sitting down with Kim Jong Un, and dismissing the entire Global South as a collection of “shithole” countries. Ultimately, however, he did not disrupt the economic status quo. In fact, he reinforced it through tax breaks for the wealthy, handouts to fossil fuel companies, and trade policies that benefited the largest corporations. In other words, Trump won the 2016 election by appealing to the “losers of globalization” only to perform a bait-and-switch in the White House where he continued to redistribute wealth upward.

Not all right-wing populists abandon their economic populism when they take office. The Law and Justice Party in Poland, its many faults notwithstanding, did push through policies that delivered a child credit to families and a cash bonus to pensioners, both very popular initiatives.

In France, Marine Le Pen is taking a page from the Polish right-wing’s playbook. She promises to help average French citizens struggling with the effects of inflation and fuel prices. She pledges to eliminate taxes for those under 30, replace the property tax with a wealth tax, and slash the value-added tax. She has embraced leftist positions on increasing state investments in both failing industries and strategic sectors. She has even steered her party in an ecological direction by promoting Green reindustrialization and the reduction of material consumption.

This is why some Mélenchon supporters are heading full speed ahead to the right. Whether Le Pen follows the Law and Justice Party in implementing any of that agenda or does a bait-and-switch like Trump remains to be seen (or, if we’re lucky, remains not to be seen).

The problem with these right-wing disrupters, of course, is that they’re not just talking about economics. They have a distinctly racist and xenophobic agenda. In France and elsewhere, the rejection of globalization has led some voters to reject liberalism altogether, which includes abandoning more inclusive approaches to citizenship, education, and race and gender. How soon these former leftists forget that Hitler too implemented economic policies borrowed from his socialist opponents, like full employment and large, state-funded projects such as the Autobahn.

It’s not just domestic policies that have elements of the left flirting with the far right. The wholesale rejection of liberalism has also led some elements of the left to gravitate toward Vladimir Putin, who loves to defy the liberal international order. Thumbing one’s nose at NATO expansion and complaining about the isolation of Iran are expressions of that defiance. Unfortunately, so is his invasion of Ukraine.

That’s the sad truth about the far right. They will indeed overturn the status quo. But some elements of the status quo—respect for sovereignty, adherence to the rule of law and democratic process, observation of international norms for human rights—are worth preserving. Those Mélenchon and Sanders supporters who have leapt to the other side understandably want to get rid of the cold, dirty bathwater of the status quo. But they need to pay more attention to the well-being of the baby as well.

ohn Feffer is the director of Foreign Policy In Focus. His latest book is Right Across the World: The Global Networking of the Far-Right and the Left Response.