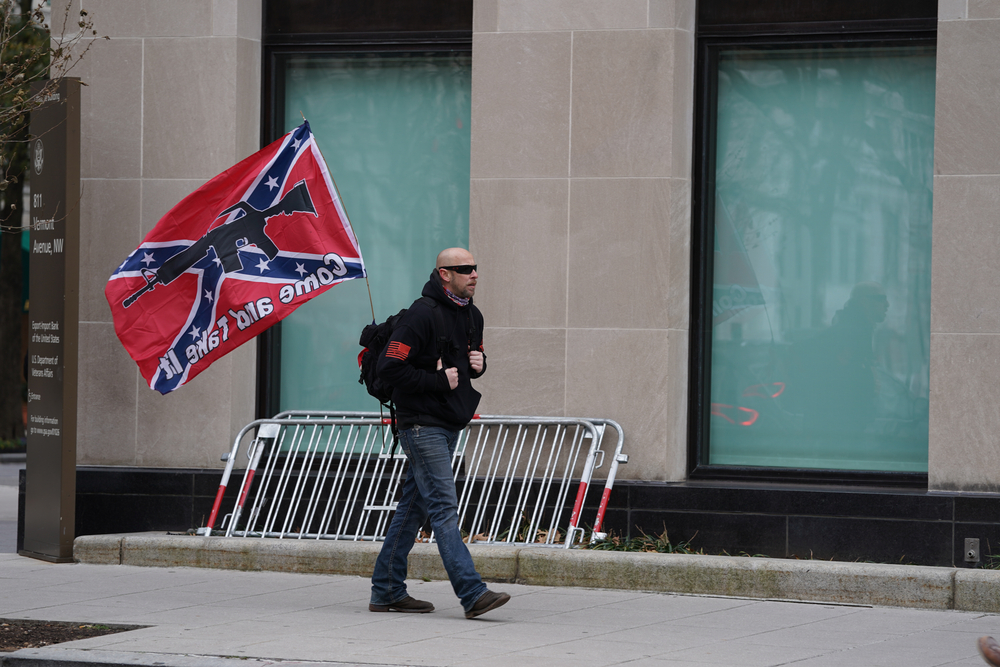 Exposing the links between the Trump team and the far right is important for saving American democracy and defeating global fascism.
By John Feffer | July 13, 2022

The first single that the English punk band The Clash released in 1979 was controversial. Entitled “White Riot,” the song seemed to call on White kids to launch a race-based uprising. The song begins:

The Clash’s lead singer Joe Strummer strenuously denied charges that the song was racist. It was, he said, explicitly anti-racist. The song approvingly cites the uprising of Black youth in British cities against poverty and racism. The lyrics urge White youth to rise up in solidarity since, after all,

The events of January 6, 2021 are an eerie, fun-house reflection of these lyrics. In what turned into a White riot, the insurrectionists effectively wanted a “riot of my own” after observing the BlackLivesMatter protests that broke out in the wake of George Floyd’s killing half a year earlier. But this was hardly a demonstration of solidarity. Even though the January 6 riot ended up being far more antagonistic and violent toward the police than any #BLM demonstration, it was a direct repudiation of the efforts by African Americans and others against police brutality, political disenfranchisement, and economic inequality.

Trump supporters have sought to play down the significance of the January 6 insurrection by comparing it to the supposedly more violent protests of the summer of 2020. The defensive coordinator of the Washington Commanders football team, Jack Del Rio, recently called the White riot of 2021 a “dust-up” compared to that “summer of riots, looting, burning and the destruction of personal property.” Trump famously called #BLM protesters “thugs” but the Capitol rioters “very special.” In other words, “their Black riot” was illegitimate but “our White riot” was basically “a normal tourist visit” (as one House Republican called the January 6 insurrection).

The vast majority of the “very special” people who stormed the Capitol on January 6 were White: 93 percent according to the Chicago Program on Security & Threats. Many of the rioters carried Confederate flags, flashed the OK hand signal of White power, deployed even more esoteric references to their neofascist leanings such as Pepe the Frog and the flag of “Kekistan,” or chillingly brought along nooses, with their connotation of lynching.

Yes, yes, I know: Trump managed to attract quite a lot of support from people of color in the 2020 election, with roughly one-third of Latino and Asian voters backing him along with nearly one in ten African-Americans. Equally disturbing, Trump improved his standing with these constituencies from the 2016 elections. Not surprisingly, some people of color showed up on January 6 and were even represented in the far-right paramilitaries. The leader of the Proud Boys, Enrique Tarrio, is of Afro-Cuban descent, for instance, and was only absent from the January 6 insurrection because he’d been arrested two days before.

But even if there were some non-White faces in the crowd on January 6, it was a White riot nonetheless. The racist dimension of the insurrection has been previously noted, particularly in the testimony of the police officers who defended the Capitol and endured the onslaught of racial epithets. The insurrectionists were determined to overturn the election of a candidate overwhelmingly supported by people of color and deliver the White House (once again) to a politician who has actively cultivated White supremacists, both as voters and as shock troops against his opponents.

The congressional investigation into the events of January 6 started up again this week after the extraordinary testimony of Cassidy Hutchinson at the end of last month. The former aide to White House chief of staff Mark Meadows provided the critical information that the Trump team knew full well that there would be violence on that day, that Trump knew that his supporters were armed and dangerous, that the former president was eager to lead the mob to the Capitol, and that he was more than happy to throw his vice president quite literally to the wolves.

In this latest round of revelations, the committee is establishing the concrete links between the administration and the far-right organizers of the attempted coup. Once again, we are revisiting the critical distinction of the Russia investigation between cooperation, coordination, and collusion. How much did members of the Trump team knowingly work behind the scenes with far-right plotters to orchestrate the events of January 6?

Proving these links is essential not only for proving criminality and preventing Trump (and his cronies) from ever holding future political office. Because Trump is a symbol for the far right worldwide, this investigation is a full-on challenge to global fascism as well.

The Racism of the Far Right

The testimony this week of Jason Van Tatenhove, a former spokesperson for the Oath Keepers, reveals the degree to which the militia movement has been permeated by White nationalism.

The Oath Keepers are a militia movement devoted to defending the Constitution against what they perceive to be a tyrannical government. It’s one of the bigger groups in the constellation of “patriot militias.” Originally critical of both main political parties, the Oath Keepers went all in to support Donald Trump. Given its anti-government ideology, the group obviously had to make some adjustments to fight on behalf of the head of that government. After 2016, the founder of the group Stewart Rhodes began to fulminate against the “deep state” opposition to Trump even as he embraced QAnon conspiracy theories.

Tatenhove makes clear, however, that the Oath Keepers had a clear racist agenda. The group drifted “further and further right—into the alt-right world, into White nationalists and even straight-up racists,” he testified, “and it came to a point where I could no longer continue to work for them.”

Tatenhove might be a little self-serving here. After all, the Oath Keepers showed up in Missouri all the way back in 2014 and again in 2015 on the first anniversary of the police killing of Michael Brown in Ferguson. They were ostensibly protecting conservative journalists from protestors, but the optics were revealing: armed White vigilantes squaring off against predominantly African-American protestors. The optics reversed six years later when White Oath Keepers confronted African-American police officers on January 6.

The alt-right has often adopted a policy of “plausible deniability” when it comes to charges of racism. These organizations are experts at code-switching. They are White supremacists among their followers but they are race-neutral when talking with reporters. As a spokesperson, Tatenhove perhaps believed the race-neutral language he once used with the press. In truth, it’s never going to be clear when an organization like the Oath Keepers slips into White nationalism because of the strategic ambiguity of its approach.

What’s important is the role the Oath Keepers and similar organizations played as instruments of the Trump administration. The congressional commission is exploring the links between the Oath Keepers and the Proud Boys to top Trump allies like political operative Roger Stone and former National Security Advisor Michael Flynn, both of whom used these organizations to provide for their own personal security.

As in the Russia case, however, the Trump team relied heavily on the power of social media to rally the troops. In 2016, it was Wikileaks that spread the damaging information that Russian hackers obtained from the Democratic Party. In 2020, it was Twitter that spread Trump’s call to arms—particularly his December 19 “be there, will be wild” tweet—to a ready-and-waiting network of alt-right activists, militia members, and White nationalists. In both cases, Stone and Flynn facilitated the contacts. Even in the absence of explicit collusion, however, the evidence of collaboration is damning.

What This Means Globally

For some time, the United States has been a symbol of multiculturalism and, to use an even more academic term, hybridity. Long before Barack Obama, a multiracial politician, became the country’s first non-White president, the United States was represented abroad by non-White writers, musicians, filmmakers, athletes, businesspeople, movement activists, and so on. Think James Baldwin, Toni Morrison, Spike Lee, Maxine Hong Kingston, Martin Luther King, Jr., Michael Jordan, Selena, Serena and Venus Williams, and Oprah Winfrey, to name just a few.

Trump and the Republican Party, in their courting of the alt-right and White nationalists, have been trying in their ham-handed but dangerous way to slow down and reverse the transformation of American politics, culture, and economy by non-Whites. This project of turning back the clock on decades of advancement appeals to far-right movements all around the world who yearn for a lily-white France, a pre-immigration Germany, a Fortress Australia. It even appeals to the far right in non-White countries such as anti-immigrant activists in Japan and anti-Muslim forces in India. And this explains, in part, the support that Trump has received from non-White voters. They see in Trump a permission to indulge in their own parochial hatreds.

The January 6 commission sees itself as restoring American democracy. This is an essential task, and it will require the sanctioning of the criminal behavior of Trump and his allies. It’s time to apply the same “law and order” yardstick against those who have trumpeted “law and order” for so much of their careers (like Trump’s outrageous advertisements in favor of the death penalty for the wrongly accused Central Park Five, who were eventually exonerated).

But in restoring democracy, the commission will also send a strong signal to all those around the world who believe that might makes right (I’m looking at you, Vladimir), who have dressed up their racism in respectable clothes (sound familiar, Bibi?), and who are fighting for an illusory homogeneity that privileges a powerful majority (if the shoe fits, Narendra).

Much depends on the outcome of this January 6 investigation. Powerful testimony is important. Moral outrage is important. But this is no time for mere hand-slapping. I don’t want to hear that the arc of the moral universe eventually bends toward justice. I want the arc of the moral universe, like the proverbial buck, to stop here, with the repudiation of Trump’s White riot, the expulsion of him and his advisors from politics, and jail time for everyone who committed crimes from the hapless QAnon shaman to the president himself.