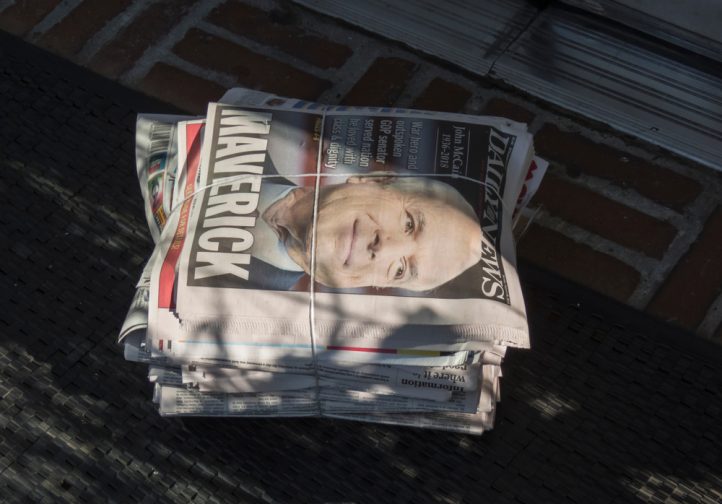 John McCain was an American politician. That sums up his best and worst qualities.

He was not a maverick. As a rather conventional politician, he wasn’t even particularly courageous or much of a straight talker. He represented establishment values as the establishment tilted ever rightward.

And yet, in comparison to what passes for political orthodoxy in the White House these days, John McCain was a symbol of rectitude and honesty. However much I dislike the establishment for which he stood, that establishment now serves as powerful resistance to Donald Trump, who is the true maverick in American politics right now.

John McCain was no moderate Republican. He was a reliable right-winger who favored cutting taxes and government spending but also never missed an opportunity to boost the Pentagon budget.

He was a big fan of promoting regime change around the world and held a particular animus toward the government in Iran. He supported the war in Iraq and wanted the United States to increase its involvement in Syria. He opposed negotiations with North Korea. He embraced the conventional view that global alliances like NATO maintain U.S. global dominance.

Not surprisingly, he received a lifetime rating of 80 percent from the American Conservative Union. On some particular scorecards, he did even better. The National Right to Life Committee ranked him at 100 percent. And despite all the notoriety he received for standing up to Donald Trump, McCain generally supported this most disgraceful of presidents. According to the FiveThreeEight blog, McCain voted with Trump 83 percent of the time.

At times, he even demonstrated some very Trump-like behaviors. As Peter Certo writes in OtherWords, “For years he referred to East Asians by a Vietnam-era slur, opposed making MLK Day a holiday, and reportedly had a habit of calling women, even his wife, the c-word.” His choice of Sarah Palin to be his vice president in the 2008 election wasn’t really such a stretch, at least in terms of her politics.

But McCain wasn’t entirely predictable. He complicated his relationship with the right wing of the Republican Party by adopting a few idiosyncratic positions. Those positions might not have been popular with his Republican peers, but they were often popular with the public more generally. But that makes McCain a politician, not an unorthodox or independent-minded person (the definition of maverick).

So, although he pushed for huge military budget increases, he castigated his congressional colleagues for their pork barrel spending and criticized the Pentagon for its military waste. He denounced the U.S. government for engaging in torture (yet quietly made political compromises that enabled the George W. Bush administration to continue its practices). Along with former Senator John Kerry (D-MA), McCain supported détente with Vietnam. These moves ultimately endeared McCain to (some) liberals.

On Trump, John McCain went back and forth — just like a politician. He initially endorsed Trump’s presidential candidacy because he was, after all, a party loyalist. But then he withdrew that endorsement after the release of the Access Hollywood tape. In addition to taking a belatedly principled stance, McCain probably thought Trump was toast at that point.

Once Trump occupied the White House, McCain made a deal with the devil just like virtually every other Republican. Mephistopheles could continue to stick pitchforks into everyone left and right as long as he cut government regulations and taxes for the wealthy, enlarged the Pentagon, and populated the judiciary with legal lunatics.

But early on, McCain also voiced selective criticisms: of the Muslim travel ban, Trump’s Russia policy, the failed mission in Yemen, and so on. Again, McCain proved to be not so much courageous as simply political. He expected that his congressional opposition might actually affect policy.

And here’s the major difference between McCain and Trump. As a politician, McCain was open to engagement. Sure, he was a diehard conservative. But he would partner with the Dems on the issues he cared about, like campaign finance reform or opening up relations with Vietnam.

He played by the (admittedly rigged) rules of the game in Washington. He cared what his constituents thought about him. He wanted to win reelection. He also fancied himself an elder statesman who could effect change because of the longevity of his service.

It was a sad acknowledgement of how sclerotic American politics had become that John McCain acquired the reputation of a maverick. In a paint-by-number Congress, he only occasionally colored outside the lines, and then only when he thought he had the public on his side.

Donald Trump, meanwhile, is a true maverick. He takes positions that no one in their right mind would ever adopt as a Republican politician, as a conservative president, and in some cases, as a human being.

Talk about breaking up NATO? Check.

Insult major world leaders, virtually every politician in the United States, and even members of his own administration? Check.

In Bob Woodward’s new book Fear, excerpted this week in The Washington Post, Trump emerges as such an unorthodox character that his closest advisors can only react with horror and exasperation. Trump wants to assassinate President Bashar al-Assad. He asks the Pentagon to plan a preemptive strike on North Korea. He ignores his top economic advisors and insists on pulling out of NAFTA.

This is true independence of thinking. It also edges close to madness, but that’s the risk mavericks take.

Mind you, this kind of maverick is only a hero in a country that celebrates outlaws, gangsters, and bat-shit crazy celebrities, and Trump is only a hero to a minority of the population. Meanwhile, the establishment — minus the Republican Party and its wealthy backers — has had enough of Donald Trump because he cares so little about observing protocol, respecting tradition, or acting like a grownup.

In short, Donald Trump is not a politician. He doesn’t even play one on TV. There is no negotiating with him. There’s no give and take. You are either with him or against him. You can’t reason with a Mafioso.

Once Trump is deposed, America can return to politics as usual, with all its ugliness and messy compromises and ordinary corruption. It can return to the politics of John McCain, a politics that combines a civility of discourse with a cruelty of consequences. And that, alas, will be an improvement.

After Trump dons an orange jumpsuit that complements his hairstyle — or at the very least retires in semi-obscurity to Mar-a-Lago — then comes the hard work of pushing the political center to the left.

Perhaps, just like in the wake of Watergate, a wave of young, talented, and honest newcomers like Alexandria Ocasio-Cortez and Ayanna Pressley will change politics as usual. Then we’ll look back at the current era in which the likes of John McCain is considered a maverick and shudder.