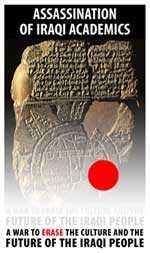 Wikileaks has revealed information about U.S. involvement in civilian deaths in Iraq. There now should be an independent investigation into the murders of hundreds of Iraq academics.
By Adil E. Shamoo | January 6, 2011

By April 2004, just a little over a year after the U.S. invasion of Iraq and before the sectarian violence began, the Iraqi Association of University Teachers (AUT) reported that 250 academics had been killed. Award-winning British journalist Robert Fisk had warned early that year of the assassinations of Iraqi academics, but few U.S. newspapers picked up on the story. By the end of 2006, according to The Independent, over 470 academics had been killed. Another British paper, The Guardian, reported that about 500 academics were killed just from the Universities of Baghdad and Basra alone.

Based on multiple sources, the BRussells Tribunal sifted through such reports and published on its website the names of over 400 murdered academics and when they were killed. Although the exact total number of assassinated academics is not really known, the indefatigable advocate for human rights Dirk Adriaensens gives a detailed analysis of the data available so far in his contribution to the book Cultural Cleansing in Iraq. According to Adriaensens, most of those killed were from the Universities of Bagdad (57 percent) and Basra (14 percent). In addition, 35 percent died in detention after being arrested/kidnapped by some security forces. The modus operandi for the killings was a professional, well-organized assassination. Fifty-four percent of the deaths occurred as a targeted killing, at point-blank range with hand guns or automatic weapons. The killing of academics did not follow any sectarian agenda since the murdered were Sunni and Shia. No one has taken responsibility for the killings, and no one has been arrested.

The reports of these murdered Iraqi academics have been around for a few years, mostly in the foreign press and on websites. I admit to an initial skepticism about their veracity. I was even more concerned about who was responsible for these heinous crimes and why. Iraqis living in Iraq knew of these murders first-hand, but did not know the culprits. Their suspicions fell naturally on the occupying power.

Along with these tragic deaths was the concomitant wave of death threats and intimidation against other Iraqi academics, which resulted in tens of thousands of Iraqi academics literally running abroad for their life. The Washington Post recently described the plight of one Iraqi family living in the United States after the husband, a professor, was assassinated and the wife, a physician, survived but gravely wounded. For some, the escape abroad was only temporary. A professor and a dean who left and returned in the past six months to Iraq were professionally assassinated. Iraq has suffered the decapitation of its intellectual class on a staggering scale, which has thrown the country back to the dark ages.

According to the new revelations of Wikileaks, in some cases the United States, through the military, contractors, and others, killed innocent Iraqi civilians including women and children. As a matter of policy we handed over Iraqi detainees to Iraqi security forces with full knowledge that they would be subjected to torture, rape, and murder. Moreover, when our military received the reports of torture, rape, and murder it chose to ignore them. Such a policy is contrary to international law, U.S. laws, and American values.

It’s not clear whether the U.S. government or the U.S. military knows who assassinated the Iraqi academics. We don’t know if U.S. officials or military commanders looked the other way when local security forces committed those crimes. But the Wikileaks documents raise many disturbing questions about a possible U.S. role in these assassinations. Even the Gulf Cooperation Council, and its half-dozen U.S.-friendly Arab members, has called on the Obama administration to “open a serious and transparent investigation” into possible “crimes against humanity.”

The evidence so far is sufficient to warrant a thorough investigation by an independent body. Iraqis, Americans, and the world need to know the truth.

Adil E. ShamooAdil E. Shamoo, is a senior analyst for Foreign Policy In Focus, and writes on ethics and public policy. He is a Professor at University of Maryland School of Medicine. He can be reached at ashamoo@umaryland.edu.