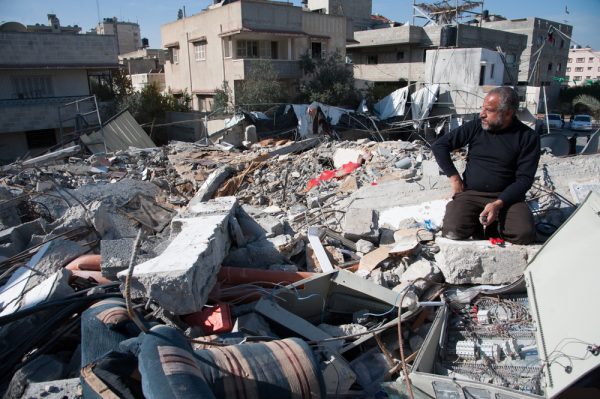 A man combs through the wreckage of a Palestinian government building leveled by Israeli bombing. (Shutterstock)

Why Are Palestinians Protesting in Gaza?

As Americans, we bear direct responsibility for the horrific reality in Gaza.
By Mike Merryman-Lotze | April 26, 2018

Once again, the Israeli military has turned its guns on Gaza — this time on unarmed protestors, in a series of shootings over the last few weeks. Gaza’s already under-resourced hospitals are straining to care for the thousands of protesters who have been injured, on top of 40 killed.

According to a group of United Nations experts, “there is no available evidence to suggest that the lives of heavily armed security forces were threatened” by the unarmed demonstrators they fired on.

The violence is getting some coverage in the news. But the conditions in Gaza that have pushed so many to protest remain largely invisible. So do their actual demands.

Seventy years ago, Palestinians were expelled from their homes en masse when their land was seized for the state of Israel. Many became refugees, with millions of people grouped into shrinking areas like Gaza. Fifty years ago, the rest of historic Palestine came under Israeli military occupation.

While these refugees’ right of return has been recognized by the international community, no action has been taken to uphold that right. Meanwhile, the occupation has become further and further entrenched.

For over a decade, the people of Gaza have lived under a military-imposed blockade that severely limits travel, trade, and everyday life for its 2 million residents. The blockade effectively bans nearly all exports, limits imports, and severely restricts passage in and out.

In over 20 visits to Gaza over the last 10 years, I’ve watched infrastructure degrade under both the blockade and a series of Israeli bombings.

Beautiful beaches are marred by raw sewage, which flows into the sea in amounts equivalent to 43 Olympic swimming pools every day. Access to water and electricity continually decreases, hospitals close, school hours are limited, and people are left thirsty and in the dark.

These problems can only be fixed by ending the blockade.

As Americans, we bear direct responsibility for the horrific reality in Gaza. Using our tax money, the U.S. continues to fund the Israeli military through $3.8 billion in aid annually.

A group of U.S.-based faith organizations has called out U.S. silence in a statement supporting protesters and condemning the killings: “The United States stood by and allowed Israel to carry out these attacks without any public criticism or challenge,” they said. “Such U.S. complicity is a continuation of the historical policy of active support for Israel’s occupation and U.S. disregard for Palestinian rights.”

The signatories include the American Friends Service Committee, where I work, an organization that started providing humanitarian aid to refugees in Gaza as far back as 1948.

While the U.S. does give money to the United Nations and international aid groups working in Gaza, it’s barely a drop in the bucket compared to our support of the military laying siege to the territory.

As my colleagues in Gaza have made clear, what they need isn’t more aid. That humanitarian aid is needed because of the blockade. What they need is freedom from the conditions that make life unlivable — like the blockade itself — and a long-term political solution.

Ignoring the reasons Gaza is in crisis only hurts our chances to address this manmade humanitarian horror.

Mike Merryman-Lotze has worked with the American Friends Service Committee as the Palestine-Israel Program Director since 2010.