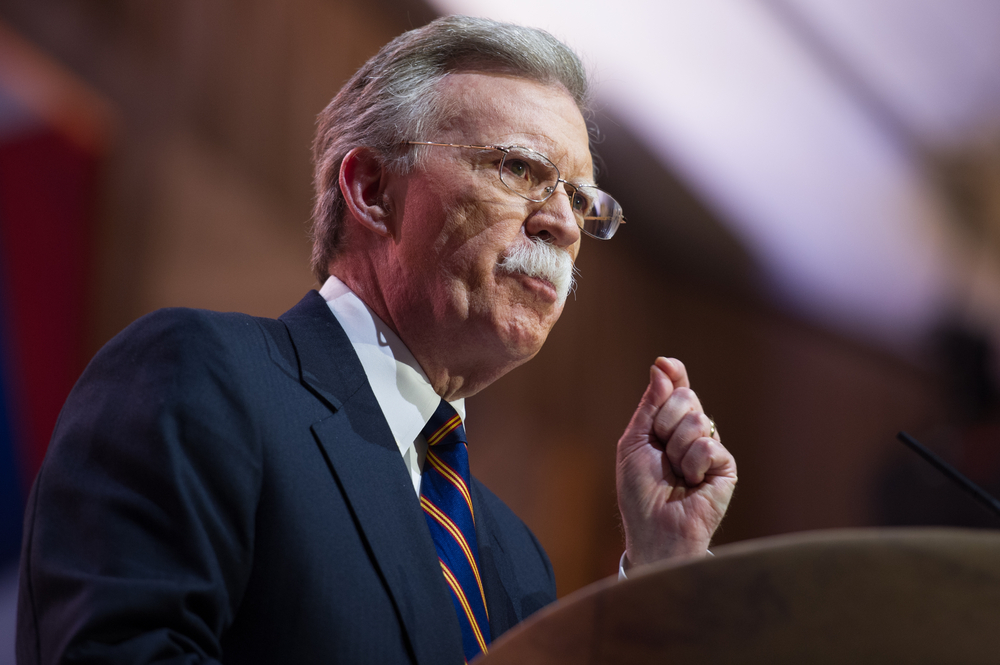 You don’t need to lionize Bolton, a far-right hawk, to understand what makes his observations about Trump valuable.
By John Feffer | June 24, 2020

Unreliable narrators are a staple of literature. Consider the delusional, self-serving narrator of Gillian Flynn’s Gone Girl or the way Humbert Humbert used his cultured references and gorgeous prose to dress up his crimes in Nabokov’s Lolita.

Now along comes John Bolton and his account of time served in the Trump administration as national security advisor.

Bolton’s latest book has been attacked as fiction by the president, members of his administration, and even members of the administrations of other countries (like South Korea). Bolton is a thoroughly unpleasant hatchet man who has opposed arms control treaties, diplomacy in most forms, and international institutions of all varieties. He is reliably paleoconservative. But does that make him a reliable narrator of his own story as well?

The picture Bolton paints of the Trump administration is a familiar one. We’ve been treated to a succession of tell-all accounts of the horror that has been Donald Trump’s tenure as president: Michael Wolff’s Fire and Fury, Philip Rucker and Carol Leonig’s A Very Stable Genius, even A Warning by Anonymous. Each one has added a little more paint to the Hieronymus Bosch picture of the presidency: monsters, unspeakable acts, darkness, and chaos.

Other than a morbid, rubbernecking fascination with atrocity, why is yet another account necessary, and from such a potentially unreliable narrator as John Bolton to boot?

The critics of Bolton’s trustworthiness have a point. But Bolton’s unreliability resides not so much in his ideology as his opportunism.

As a “kiss-up, kick-down kind of guy,” he’ll do whatever it takes to attain power. He has a terminal case of Washingtonitis: he thinks he’s the smartest man in the room and he reeks of entitlement. He entered the Trump administration not as a true believer in Trump, only a true believer in himself. His book not surprisingly portrays John Bolton as the only person in the Trump administration with any sense at all.

Here’s why you shouldn’t.

Taking China Off the Table

Still, Trump is running on his foreign policy record. For instance, he has been busy trying to portray his opponent, Joe Biden, as somehow pro-China. “China wants Sleepy Joe sooo badly,” Trump tweeted back in April. “They want all of those billions of dollars that they have been paying to the U.S. back, and much more. Joe is an easy mark, their DREAM CANDIDATE!”

Then came the ad campaign that portrayed “Beijing Biden” as “China’s puppet” who favors engagement with Beijing without caveats and Biden’s son as the beneficiary of sweetheart deals with the Chinese. The Trump ads slam China for its handling of the coronavirus and suggest that Biden would have fumbled the U.S. response out of deference to Beijing (uh, sound familiar?).

The inconvenient truth, however, is that Trump, to quote Nicholas Kristof, “has been China’s stooge, a sycophantic flatterer and enabler of President Xi Jinping.”

As Trump and Biden escalate their China-bashing, along comes Bolton. No friend of Beijing, the national security advisor is appalled at Trump’s exchanges with Xi Jinping. In one such conversation, Trump effectively signs up the Chinese leader as an in-kind contributor to his reelection campaign. Bolton had to excise Trump’s actual words from his book, but Vanity Fair has filled in the blanks:

According to an unredacted passage shown to Vanity Fair by a source, Trump’s ask is even more crudely shocking when you read Trump’s specific language. “Make sure I win,” Trump allegedly told Xi during a dinner at the G20 conference in Osaka, Japan last summer. “I will probably win anyway, so don’t hurt my farms.… Buy a lot of soybeans and wheat and make sure we win.

Trump was, of course, impeached for attempting the same strategy with Ukraine.

The other shocking revelation from Bolton’s book is Trump’s response to China’s construction of “re-education” camps for the Uyghur minority in Xinjiang province. It’s not simply that Trump ignored China’s action, as he contends, to ensure that trade negotiations moved forward. According to Bolton, “Trump said that Xi should go ahead with building the camps, which Trump thought was exactly the right thing to do.”

An American president encouraged another country to engage in a massive human rights violation?

True, American presidents have given the green light to such things in the past: Sukarno’s slaughter of suspected Communists in Indonesia in 1965, Pinochet’s coup and subsequent crackdown on Allende supporters in Chile in 1973, the Salvadoran government’s widespread human rights violations in the 1980s. Horrifying as these atrocities were, American conservatives could rationalize U.S. support for these dictatorships because they were U.S. allies.

But China? That’s going to be a difficult sell for an electorate that’s already been primed, by the Trump administration itself, to demonize Beijing.

So, in effect, the Bolton book has removed China from the 2020 election campaign. Trump will think twice about accusing Biden of cozy ties with Beijing when the Democrats can literally throw the book (Bolton’s, that is) at the president.

Impeachment: Not Dead Yet

Trump loves to play the role of a cornered badger that emerges triumphant in the end. Impeachment would have given an ordinary politician pause. Trump simply held up the Senate’s failure to convict as exoneration, despite all the damning evidence produced by the whistleblower and the subsequent Mueller investigation.

The Democrats wanted Bolton to testify during the hearings. He refused to do so voluntarily. Later, he said that he would testify before the Senate if it issued a subpoena. The Republicans, with the exception of Mitt Romney (R-UT) and Susan Collins (R-ME), voted against calling additional witnesses.

Bolton argues in his book that the Democrats made a mess of the impeachment inquiry. Yet, he could have corroborated the charge of collusion with Ukraine and provided evidence of impeachable offenses in other realms of foreign policy. He didn’t do so.

Now, of course, some Republicans are saying that it would have been better for Bolton to have testified before Congress rather than save his revelations for now. “One of the things about making allegations in a book for $29.95 — certainly it’s going to be a best-seller I’m sure — the problem is that when you’re selling it in a book, you’re not putting yourself in a position to be cross-examined,” Tim Scott (R-SC) recently said.

If Scott and one other Republican had simply voted for additional witnesses, they could have made that happen. And they could have saved themselves the cost of buying Bolton’s book.

In the end, it probably wouldn’t have made much of a difference in the final votes on impeachment. Except for Romney, the Republicans were unwilling to break with the president.

Bolton’s book, however, is disinterring all the issues surrounding impeachment and in a light unfavorable to the president. Bolton confirms the infamous quid pro quo — military assistance in exchange for an investigation into the Ukraine dealings of Biden’s son — that Trump discussed in a phone call with the Ukrainian president and that was flagged by a whistleblower. “Nor, at the time, did I think Trump’s comments in the call reflected any major change in direction; the linkage of the military assistance with the Giuliani fantasies was already baked in. The call was not the keystone for me, but simply another brick in the wall,” Bolton writes.

Before you shell out $29.95 for the book (actually $32.50 list price), you might wait to see if Congress drags Bolton back to tell his story. This week, Adam Schiff (D-CA) hinted that he might depose the former national security advisor before the House Intelligence Committee.

Who knows? Trump might have to reckon with a second impeachment hearing as he heads into November.

The Benefits of Being Bolton

Bolton predictably criticizes Trump for not being sufficiently hawkish. The president wanted to withdraw troops from the Middle East. He wanted to make nice with North Korea. He had the gall to prioritize trade with China.

From a progressive point of view, that makes Bolton an unreliable narrator. Maybe he was tweaking the facts to make himself look stalwart and wise at the expense of a slow-witted, insufficiently martial president.

But here’s the thing: Bolton hasn’t written anything in his book that contradicts other accounts of the presidency. There was plenty of evidence of the quid pro quo with Ukraine. Trump did not hide his admiration for Xi Jinping. The president is obsessed with getting re-elected, not because he particularly likes his job but because he must prove that he is a winner.

What makes Bolton’s observations most valuable is not their novelty or their acuity but his credentials as a hawk’s hawk. His book isn’t going to make any Democrats or independents or moderate Republicans change their minds about Trump. But it will introduce some doubts into hardcore conservative supporters. They might not publicly renounce the president. Like Bolton himself, they might not even pull the lever for the Democratic candidate.

But they might decide, because of Bolton, to stay home on November 3, just like so many Republicans decided not to attend Trump’s rally in Tulsa this last weekend.

And that, ultimately, is what really puts the fear of Bolton into the Trump reelection campaign.