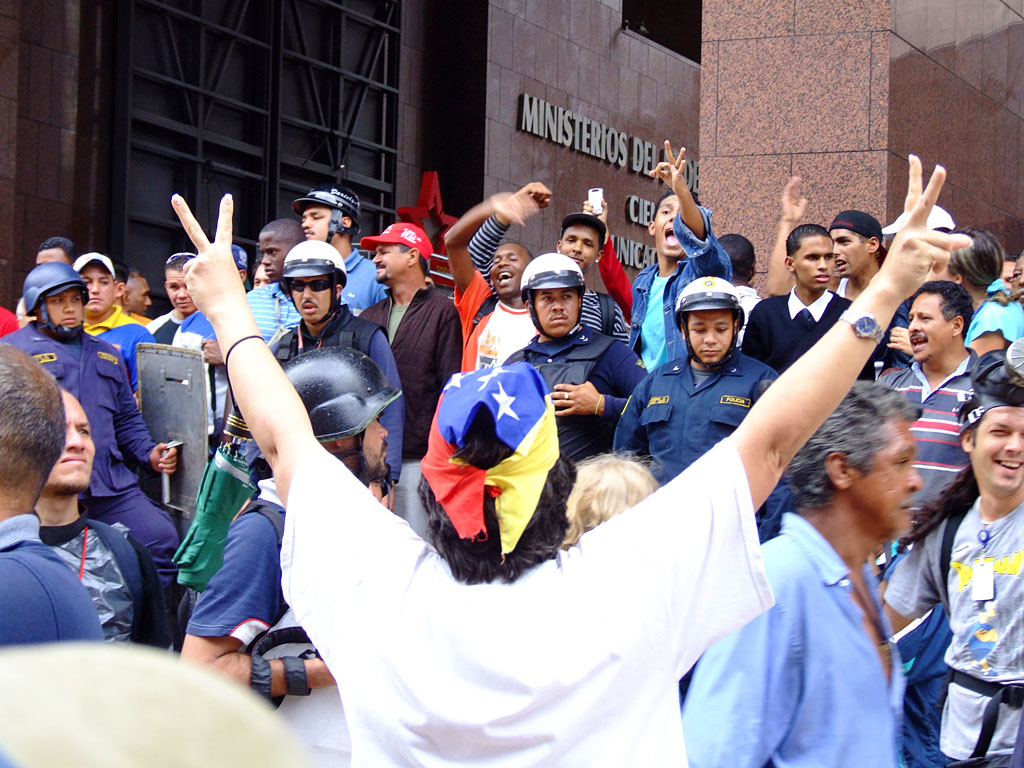 Why is Venezuela Spiraling Out of Control?

Opposition violence and the government’s increasing authoritarianism are both to blame.
By Gabriel Hetland | May 1, 2017

Every day the news about Venezuela seems to get worse.

On March 29th the Supreme Court dissolved the National Assembly. The partial reversal of this decision days later did not prevent the outbreak of a new wave of deadly protests in the beginning of April. The death toll now stands at thirty, and is rising by the day. Both opposition and government supporters have been killed. Government offices have been looted and set aflame, and government officials murdered. No end is in sight.

The Organization of American States (OAS) is set to hold yet another emergency meeting of foreign ministers to discuss Venezuela’s crisis. Venezuela has declared it will leave the OAS, possibly to preempt being suspended from the organization. In the eyes of many this action will make Venezuela even more of a pariah nation than it already is.

Venezuela’s deep economic and social crisis shows no signs of abating, and will likely get worse amidst the chaos and violence wracking the country. The opposition has shown its willingness to sacrifice possibilities for economic recovery to achieve its goal of removing President Nicolás Maduro from office, with the Associated Press reporting that opposition-led National Assembly head Julio Borges recently contacted over a dozen leading international banks, urging them not to do business with Venezuela. The government, in turn, faces increasing criticism for its seemingly complete inability to solve, or even admit the full severity of, the nation’s socioeconomic crisis, and what many see as its slide into authoritarianism.

How should we make sense of all of this?

There are two contrasting narratives currently circulating about Venezuela’s crisis. The first, prominent in mainstream western media, portrays the government as a dictatorial regime engaged in ruthless repression of a heroic opposition peacefully seeking a return to democratic rule. The second, put forward by the government and a small (and likely dwindling) group of international solidarity activists, portrays a democratically elected government besieged by a violent, unhinged opposition that (a) represents a small minority of wealthy elites; (b) enjoys full support from the US empire; and (c) will stop at nothing to achieve regime change, regardless of the legality or morality of its actions.

Both narratives contain elements of truth, but neither does justice to Venezuela’s crisis.

The idea that Venezuela is authoritarian has been repeated ad nauseam for nearly the entire eighteen-year period of Chavista rule, which began when Hugo Chávez was elected president in 1998. Until recently, it has been relatively easy to refute this claim, which ignores the fact that Venezuela’s ruling party has been repeatedly affirmed at the polls, winning 12 of 15 major elections between 1998 and 2015, and conceding on the three occasions when it lost (December 2007, September 2010, and December 2015). On the five occasions Chávez stood for office between 1998-2012 he won by substantial margins (his lowest margin was 55-44 percent in 2012, and his highest was 63-37 percent in 2006). Venezuela’s current president, Nicolás Maduro, was also democratically elected. Regularly repeated charges of electoral fraud are baseless, as fraud is all but impossible in Venezuela’s electoral system, which Jimmy Carter has called “the best in the world.”

Yet, while previous claims of Venezuela’s authoritarianism have had little merit, this is no longer the case. A series of government actions since early 2016 has made it increasingly difficult to challenge claims that Venezuela is moving in an authoritarian direction.

First, throughout 2016 the Supreme Court, which is clearly and even openly subordinate to the executive branch, blocked the opposition-controlled National Assembly, which won the legislative majority in December 2015, from passing any major legislation. In some cases, the legislature was attempting to act beyond its authority, for example, in seeking to grant amnesty to prisoners like Leopoldo López. Yet the Supreme Court’s systematic blockage of the National Assembly effectively rendered the opposition’s newly-captured legislative majority—and thus the December 2015 election results—null.

Second, after months of dragging it feet, the government cancelled a constitutionally allowed recall referendum process in October 2016. Third, the government indefinitely postponed municipal and regional elections that should have occurred in 2016, according to the constitution (although Maduro recently moved to set a date for the elections). Fourth, as noted, the Supreme Court issued a ruling dissolving the National Assembly in March, before partially reversing itself days later, after Maduro asked the Supreme Court to review its decision. Maduro was spurred to action when his own attorney general, Luisa Ortega, took the unprecedented step of publicly condemning the Supreme Court decision as “a rupture in the constitutional order.”

Fifth, in April 2017 Henrique Capriles, a leading opposition figure and two-time former presidential candidate (in 2012 and 2013), was banned from participating in politics for fifteen years, on highly dubious grounds.

By cancelling the recall referendum, suspending elections, and inhibiting opposition politicians from standing for office, the Venezuelan government is systematically blocking the ability of the Venezuelan people to express themselves through electoral means. It is hard to see what to call this other than creeping authoritarianism. But it is also hard to agree with characterizations of Venezuela as a full-scale authoritarian regime, given the opposition’s significant access to traditional and social media and substantial ability to engage in anti-government protest, notwithstanding certain restrictions (some if not all of which appear justified; such as limiting protesters’ access to parts of Caracas appear reasonable in light of repeated episodes of destruction of government property).

The government deserves strong criticism for its authoritarian actions, and its continuing failure to take meaningful action to resolve the country’s socioeconomic crisis. Yet, the opposition is far from the blameless victim mainstream media reports so often make it out to be. A particularly egregious example of the mainstream media’s whitewashing of the opposition’s past and present embrace of violence appears in an April 19 New York Times article, which miraculously transforms the violent 2002 military coup that overthrew Hugo Chávez into a seemingly peaceful “protest movement”: “While past protest movements by the opposition have often sought to topple the leftist government — one in 2002 even briefly deposed Hugo Chávez, the president at the time…”.

There is ample evidence the opposition’s willingness to use violent and unconstitutional means against the government is not confined to the 2002 coup, but continues into the present, as I discuss elsewhere. In April 2013 the opposition refused to recognize Maduro’s victory, despite zero evidence of fraud, and engaged in violent protests that led to at least seven civilian deaths. 41 died in another wave of opposition-led violence between February and April 2014. It is widely agreed that these deaths were a result of the actions of both opposition activists as well as state security forces, with some reports indicating that each side was responsible for approximately half the deaths, although it is challenging to collect fully reliable information on this contested issue.

The opposition has engaged in numerous acts of violence during the current round of protests. In an on-the-ground report from Venezuela on April 23, Rachel Boothroyd Rojas, wrote:

“A catalogue of the violence over the last 18 days is shocking – schools have been ransacked, a Supreme Court building has been torched, an air force base attacked, while public transport, health and veterinary facilities have been destroyed. At least 23 people have been left dead, with many more injured. In one of the most shocking cases of right-wing violence, at around 10 PM on April 20th, women, children and over 50 newborn babies had to be evacuated by the government from a public maternity hospital which came under attack from opposition gangs.”

One of the more tragic recent deaths occurred Sunday April 23 when Almelina Carillo, a “47-year-old nurse was on her way to her afternoon shift when she crossed paths with [a] Chavista march [in downtown Caracas] and was critically injured by [a frozen bottle] presumably thrown [from a high-rise apartment] by an opposition sympathizer.”

It is not clear when, or how, Venezuela’s downward spiral will end. In the face of this, the task for anyone who cares about Venezuela, and particularly left-of-center activists, scholars, and journalists who have applauded and documented the many important achievements of the “Bolivarian Revolution,” is threefold.

First, to tell the truth. This means, of course, documenting and publicizing the opposition’s brutal and deadly use of violence against government officials, grassroots Chavistas, and innocent bystanders. This issue deserves far more attention than it receives in mainstream news accounts of Venezuela. Yet, the Left cannot turn a blind eye to the government’s slide into authoritarianism, nor its inept policies. This is not out of an unwarranted blind faith in liberal, representative democracy, but because authoritarian rule is incompatible with the beautiful-albeit-contradictory-and-flawed project of building “participatory and protagonistic democracy,” which Chavismo helped advance.

Second, to reject any and all calls for imperialist interventions aimed at “saving” Venezuela. Attempts to do so will not only fail, but are likely to transform a difficult situation into a tragic one, as the horrors of Iraq and Afghanistan show all too well.

Third, to stand in solidarity with the majority of Venezuelans who are suffering at the hands of a vengeful, reckless opposition, and an incompetent, unaccountable government. If any slogan captures the current mood of the popular classes living in Venezuela’s barrios and villages it is likely this: Que se vayan todos. Throw them all out.

Gabriel Hetland is an assistant professor of Latin American, Caribbean, and U.S. Latino Studies at University at Albany, SUNY. His research examines participation, politics, and protest in Latin America and the United States.