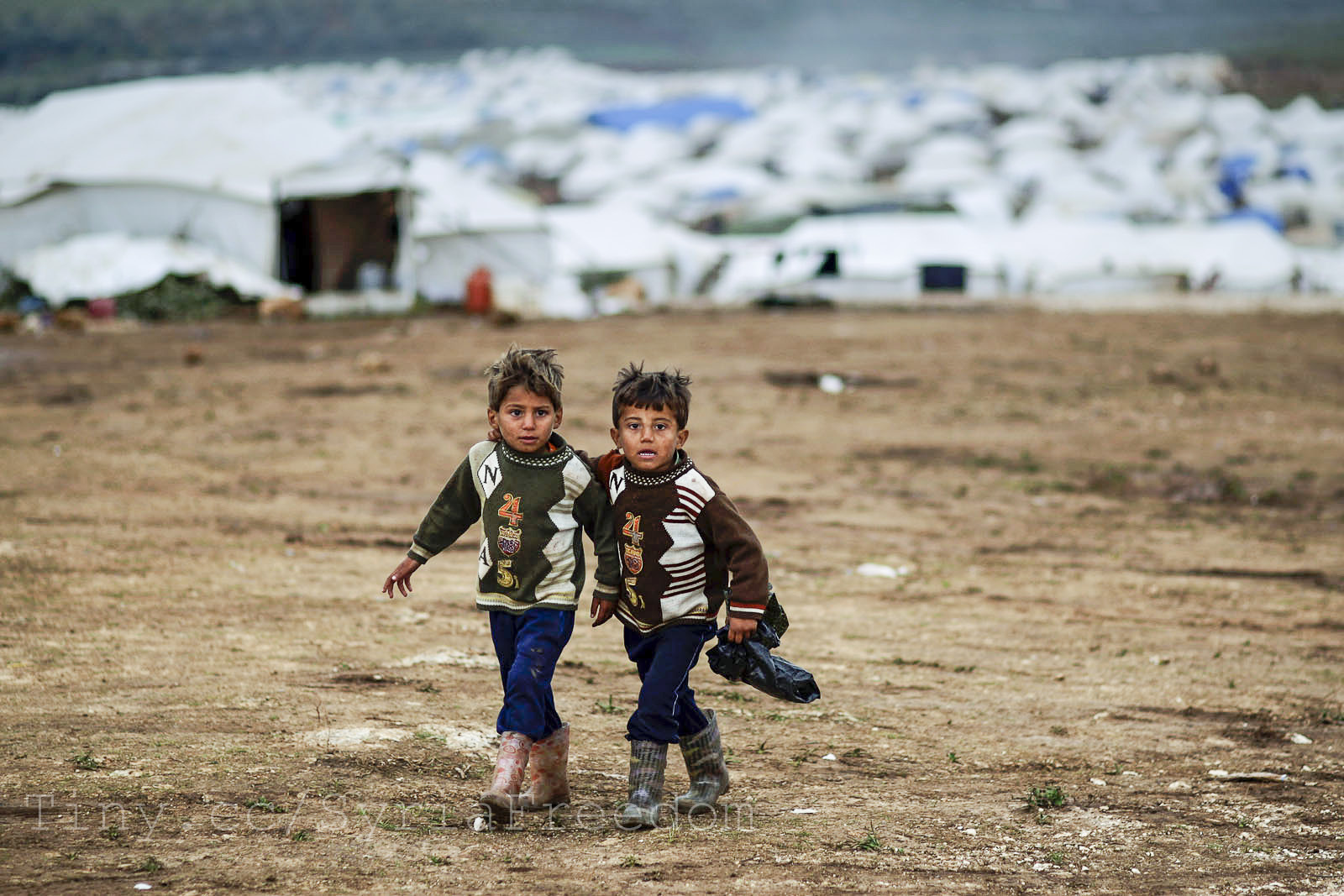 Why Should the U.S. Accept Syrian Refugees? Because It Helped Displace Them.

Washington is one of the most active players in Syria's civil war, but it's accepted effectively 0 percent of the conflict's refugees.
By Laith Shakir | October 18, 2015

When a viral photo of 3-year-old Alan Kurdi — a Kurdish boy who drowned while fleeing the ongoing civil war in Syria — captivated international audiences this summer, it became a symbol for the international community’s failure to address the millions of Syrians displaced by the country’s civil war.

This crisis did not emerge in a vacuum. For nearly five years now, the UN’s refugee agency has warned of impending disaster, calling on rich countries to increase their support for the agency’s vastly underfunded humanitarian appeals — which, as of mid-October, had raised just 43 percent of the funds necessary to supply aid to Syrian refugees.

The global failure to provide for Syria’s refugees is often cast as a humanitarian one — particularly in Europe, where hundreds of thousands have arrived in recent months. And it is.

But it also reflects a greater failure by the parties fueling the conflict to accept the inevitable consequences of their own intervention in the region. That’s especially true for the United States, which has accepted scarcely 1,500 of the more than 4 million Syrians who’ve fled the country, even as Washington has steadily deepened its own participation in the war.

The United States is far from the biggest perpetrator of human rights abuses in Syria. That particular “distinction” goes to the Assad regime, whose forces, according to the Syrian Network for Human Rights, have killed more civilians than every other armed group in the country combined. Though rebel groups and the Islamic State also bear immediate responsibility for this catastrophe, 70 percent of Syrian refugees surveyed in Germany recently reported fleeing specifically because of Assad’s regime.

As an international actor operating within Syria, however, the United States has consistently failed to recognize the link between the chaos its military operations sow and their devastating consequences for the local population. Those policies date back at least to the last Iraq war, but they’re continuing even today.

Though U.S policies have destabilized the Middle East generally in almost innumerable ways, at least three directly link the country to the wave of Syrians fleeing violence: fracturing Iraq, proliferating arms throughout the region, and continuing air strike operations against the Islamic State.

The Rise of the Islamic State

Though the general relationship between the U.S. invasion of Iraq and the region’s current state is now a firmly entrenched talking point, the specific link between U.S. policy and the rise of the Islamic State continues to be criminally under covered.

A quick history lesson is in order. After U.S. forces toppled the Baathist Iraqi government of Saddam Hussein back in 2003, coalition authorities led by U.S. Ambassador L. Paul Bremer launched an ill-fated purge of Baath party members — from high-ranking generals on down to low-level civil servants — from the country’s government and military. As a direct result of this “de-Baathification” process, the Iraqi armed forces were disbanded and 400,000 of its members were denied employment and government pensions, while being permitted to keep their weapons.

Those purged officers went on to form the core of Iraq’s Sunni insurgency, where the putative secularists found common cause with radical Sunni groups like the newly formed al-Qaeda in Iraq — which later morphed into the Islamic State. After they were run out of Iraq’s Anbar province by U.S.-backed Sunni tribesmen in the middle years of the war, they capitalized on unrest in neighboring Syria to regroup — eventually becoming a major force on both sides of the Iraqi-Syrian border.

A glance at the makeup of the Islamic State today paints a clear picture of where many of these former Baathists wound up. As the Washington Post reported in a huge exposé last April, the vast majority of the Islamic State’s military and intelligence leadership are former Iraqi officers — including the “shadowy military and security committees” that facilitate the group’s brutal efficiency.

For the United States, the invasion of Iraq and the “missteps” that followed are characterized as regretful decisions that lie firmly in the past. Yet the ability to divorce these policies from their devastating consequences is a luxury wholly unavailable for Syrians and Iraqis who are today grappling with the enduring brutality of the Islamic State.

Beyond even the Bush administration’s destabilizing policies, however, the United States continues to bear unique responsibility for violence in the Middle East — namely in the form of its ongoing sponsorship of belligerents in the Syrian war.

According to a report published by the Congressional Research Service, Washington has sent over $7.7 billion worth of nebulously defined “military aid” to Syria since 2011. In the same timeframe, the United States has only accepted 1,434 Syrian refugees. This amounts to a paltry 0.04 percent of the 4 million people who’ve fled the country during the very conflict the United States is funding.

The United States is far from the only nation responsible for funding widespread violence in Syria. For example, roughly 10 percent of Russia’s total weapon exports flow directly into Damascus, substantially supporting Assad’s military operations. At the same time, the country has granted just 1,395 Syrians temporary asylum — a move that, according to UN officials, does not guarantee “a future for Syrians living in Russia.” Regional actors, such as Kuwait and Qatar, are also not immune to this criticism — in supporting Syrian armed groups while refusing to house almost any refugees, they’re only exacerbating the humanitarian disaster.

Of this astonishing figure, Hartung elaborates, “over 60 percent have gone to the Middle East and Persian Gulf,” linking the United States to the “complex array of conflicts” throughout the region.

The aggravation of regional violence isn’t limited to supplying arms. The United States has also been engaged in an air war against the Islamic State for well over a year, coordinating coalition airstrikes against the group in both Syria and Iraq.

Echoing the CIA’s long-debunked claims about the drone war, military officials such as Brigadier General Thomas Weidley have praised this campaign — dubbed Operation Inherent Resolve — for its “extreme precision” in targeting the Islamic State while “gaining and maintain[ing] the trust of our partners on the ground.” U.S. Central Command claims that only two civilians “may have” been killed by coalition airstrikes.

Amid allegations that the military falsified intelligence reports to suggest that the war is going better than it is, however, the reliability of CENTCOM’s word is suspect at best.

To rectify this problem, “Airwars” helps to fill in the gaps. Headed by The Bureau of Investigate Journalism veteran Chris Woods, Airwars “is a collaborative, not-for-profit transparency project aimed both at tracking and archiving the international air war against Islamic State, in both Iraq and Syria.” This project serves two key functions: It carefully documents government casualty reports while simultaneously challenging them by independently following up on civilian deaths not reported by the military.

Even a cursory glance at Airwars’ findings is startling. First and foremost, the United States is responsible for the vast majority of coalition strikes in Syria: Out of over 2,500 reported strikes on the Syrian side of the border, the U.S. military has been responsible for roughly 95 percent. Total civilian deaths from Inherent Resolve, though difficult to pin down with any certainty, range from 584 to over 1,700. Despite the wide variance in accounts, one fact remains consistent throughout: The reality of these airstrikes directly contradicts the precision narrative pushed by U.S. military officials.

In failing to challenge the obvious falsehoods in CENTCOM’s reports, major news outlets are allowing Operation Inherent Resolve to be painted as a “victimless” war — a war that can apparently achieve strategic objectives without the cost of human life. In fact, the frequency and deadliness of daily coalition airstrikes can clearly be seen as a motivation for many Syrians to flee the country.

It bears repeating that the United States is in no way, shape, or form the single largest contributor to the current disaster. However, the nation is inextricably linked to the Syrian civil war in ways that have been grossly underreported. It’s precisely this lack of transparency that allows the United States to frame a recent pledge to increase its refugee threshold by 30,000 in 2017 — though it’s unclear how many spots would actually go to Syrians — as purely altruistic.

But there’s much more at stake here than altruism. For the sake of Syrian refugees, the United States must be held accountable for its role in creating this brutal reality.