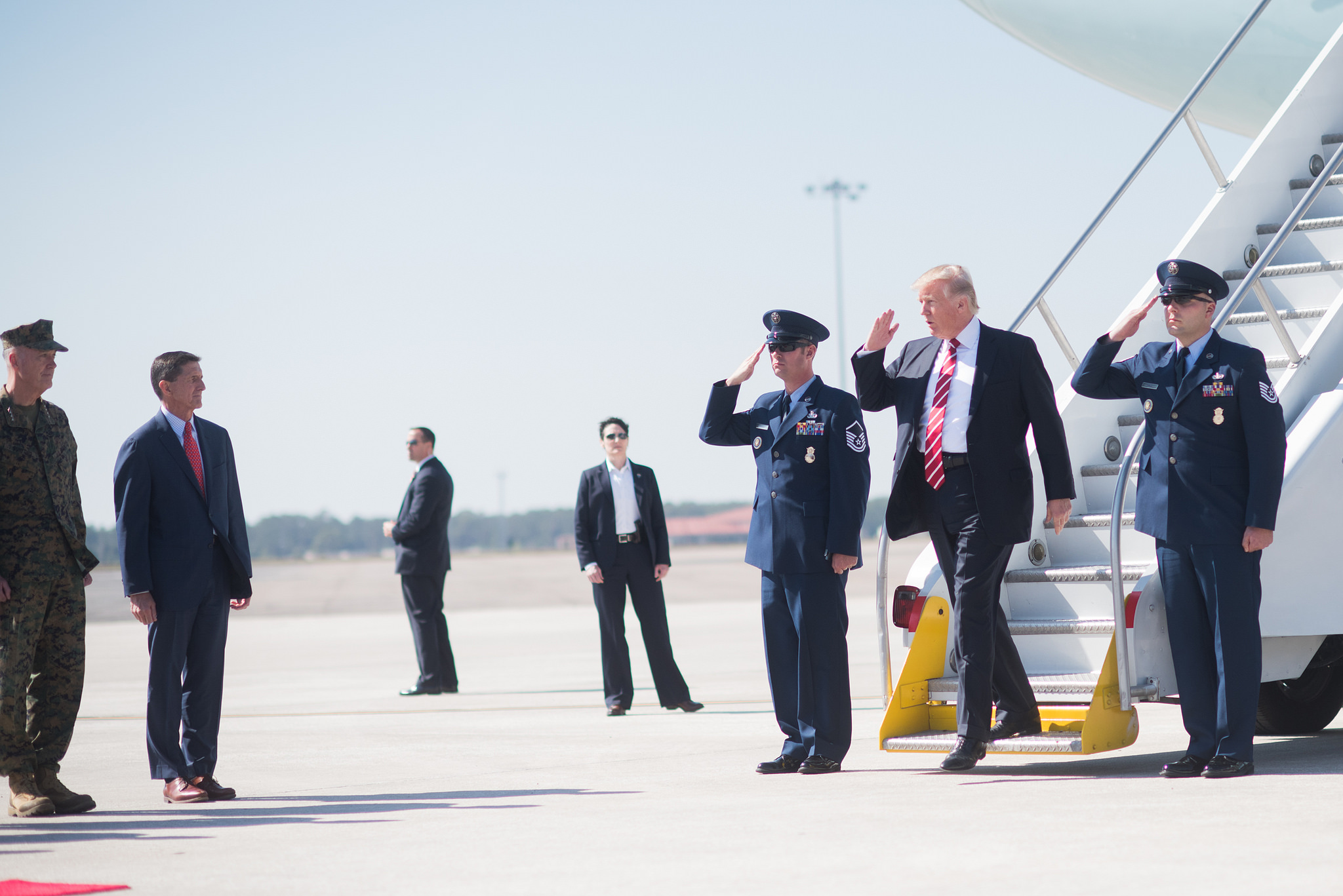 Why Spend $54 Billion More on the Pentagon? To Start a War, Obviously.

The president apparently wants to put the U.S. on a permanent war footing to sustain his unpopular presidency.
By John Feffer | March 22, 2017

So, let me see if I’ve got this right.

North Korea has been pushing its ally China to rein in the United States. Pyongyang is worried that Washington is about to launch a preemptive attack, so it has tried to use whatever minimal amount of influence it has to persuade China to use its considerable economic leverage with the United States to get those knuckleheads inside the Beltway to listen to reason.

Or maybe I misheard the report on the radio.

How about this: As a presidential candidate, Donald Trump promised to stop reckless U.S. military interventions overseas, like the one he so disliked (after it failed) in Iraq. So, as president, he is withdrawing all troops from Syria, reducing U.S. military presence in Asia, and pulling the United States out of NATO. Oh, and he’s going to cut the military as part of his overall promise to downsize government.

Perhaps I misheard that report as well.

During the Obama administration, the comic duo of Key and Peele famously introduced the “anger translator” who could give voice to what President Obama was really thinking as he provided measured responses to all manner of nonsense lobbed in his direction. Ah, those were halcyon days when we made fun of the American president for not giving voice to his true feelings.

What kind of translator do we need for the Trump era? Perhaps a “reality translator” that reveals the simple, id-like intentions behind the current president’s Tweet-rants and policy proposals.

Type in “Obama bugged Trump Tower” and out comes: “Hey, hey, stop looking at my links to Russia, okay!?” Type in “2017 budget proposal” and out comes: “I’m gonna destroy every potential source of resistance to me and my ambitions.” Type in “Trumpcare” and out comes “I’m going to rob poor Peter to pay propertied Paul.” (To quote just one example: Trumpcare would encourage health care companies to pay their overpaid CEOs even more money!)

I’ve come to the conclusion, after about 60 days of presidential antics, that the problem is not “fake news.” The problem is a fake administration.

It’s no surprise that Donald Trump, as president, just makes things up. He’s been doing that all his career. But now an entire government is being re-engineered around the pathological dishonesty of the executive and his advisors. This is bait-and-switch on a level never seen before in the United States.

It would all be rather amusing if millions of lives weren’t at stake — both domestically through the self-destruction of the federal government and internationally through the very real prospects of war.

This president, with his insuperable ambition to score some “wins,” is in search of some missions to declare accomplished. North Korea and the Islamic State are at the top of the list. But don’t be surprised if the $54 billion that Trump wants to add like an enormous cherry on top of the Pentagon’s over-rich sundae will translate into even more conflicts around the world.

Let’s Go to the Numbers

If Trump’s proposed Pentagon increase of $54 billion were the military budget of a distinct country, it would come in fifth on the list of global military expenditures. Basically, Trump wants to add an entire annual British military budget on top of what the United States already spends — which already towers above any imaginary coalition of potential rivals.

With the rest of his deplorable budget request, Trump will encounter pushback from Congress and cities and major constituencies like the over-65 set. Some of his own voters might finally come to their senses when they realize that Trump the Great is waving his magic hand in the air to distract them from seeing the other hand pick their pockets.

But on the military side, Trump has, if anything, underbid. Congressional hawks are complaining that Trump is not throwing enough money at the Pentagon. They say that he’s only offering a 3 percent increase over what the Obama administration estimated for 2018, that Trump the candidate made even grander promises, that the Pentagon should get at least another $37 billion. If Congress comes back with this figure, it would increase the increase to $91 billion. Trump’s boost alone would then rise to number three on the list of global spenders, after the United States and China.

What does Trump want to spend all this extra money on? He wants a 350-ship navy — even though the Navy is already undertaking a 30-year program to raise the number of ships from the current 272 ships to 308. He has hinted at pulling out of the New START treaty with Russia — once he found out what it was — so that he could build more nukes. There would be more soldiers, including as many as 60,000 more in the Army.

But all of this is just skirting the real issue. Donald Trump wants to spend more money on the military because he wants to go to war.

As a candidate, Donald Trump focused most of his martial fury on the Islamic State. He promised to “bomb the hell” out of ISIS and, within 30 days in office, come up with a plan to defeat the entity. When he was elected, radical jihadists predictably rejoiced: Bring it on, they effectively said.

Within 30 days, Trump indeed published a memorandum on defeating ISIS. Bottom line: We need to come up with a plan.

In the absence of a strategy, what Trump has done is chilling enough. He has unleashed the CIA to conduct drone strikes, reversing an Obama administration order. He has continued to sanction B-52 strikes, like the one this month in the Syrian village of Al Jinah that killed dozens of civilians. He’s sending 1,000 troops to join the fight against ISIS in Syria. He wants to rely more on Special Forces in raids like the one in Yemen in January that went so spectacularly wrong, leaving one Navy SEAL and several civilians dead.

In some ways, Trump is merely continuing Obama-era practices. But it promises to be a no-holds-barred version of the last administration counter-terrorism program.

Even our allies in the region are getting concerned. Trump met this week with Iraqi Prime Minister Haider al-Abadi, pledging to stand side-by-side with Iraq in the campaign to defeat ISIS.

But after the meeting, Abadi apparently had second thoughts. “Committing troops is one thing. Fighting terrorism is another thing,” he said at the U.S. Institute of Peace. “You don’t defeat terrorism by fighting it militarily. There are better ways.” Perhaps Abadi was thinking of the Trump administration’s initial inclusion of Iraq among the seven countries on the “Muslim travel ban” list. Or maybe he was thinking of Trump’s alarming pledge to seize Iraqi oil now under ISIS control.

Or perhaps the “better ways” simply referred to all the non-military parts of U.S. foreign policy — diplomacy, food aid, cooperation with international organizations — that Trump wants to ax from the federal budget. Even stalwart Trump supporters like Bob Dole are up in arms about humanitarian programs — like the Dole-McGovern initiative that provides school meals to 40 million children around the world — that are now on the chopping block.

What better way of creating the next generation of America haters?

Rex Tillerson, the empty suit that Trump has installed in the now supererogatory position of secretary of state, is trying to get back in on the action. On a recent trip to Asia, Tillerson sat down with Chinese premier Xi Jinping to plot the further isolation of North Korea.

Tillerson pointed out that the “strategic patience” approach toward North Korea had failed over the last eight years. That’s obviously true. The alternative, however, was much worse: Tillerson said that all options, including military ones, were on the table.

All of the military options come with unacceptable risks of retaliation and escalation to full-scale war. The United States could try to destroy a single missile launch, take out as much of North Korea’s nuclear complex as possible, or attempt a full regime change a la Iraq. “North Korea would perceive even a limited strike as the start of a war,” Max Fisher points out in The New York Times, “and respond with its full arsenal.”

Given the relatively crude ICBM capability that North Korea currently possesses, the people who would suffer from an escalation would be Koreans, Japanese, and Chinese.

Or perhaps the Trump administration will go to war simply out of a general attitude of un-strategic impatience.

Beyond ISIS and Pyongyang

Building the Navy up to 350 ships and inducting another 60,000 people into the Army have little to do with dealing with either ISIS or North Korea, unless the Trump administration anticipates sending another large occupation force to the Middle East or Asia. Even Trump knows that dispatching tens of thousands of American troops to a warzone is a political mistake.

Partly Trump’s moves are about ensuring that the military is on his side. Partly it’s about tilting government in general away from soft power and toward hard power. Partly it’s about Trump’s personal vulnerability on military matters given his decision not to fight in Vietnam. It wouldn’t be the first time that a guy stocked up on weapons as part of a grand scheme of compensation.

There’s been speculation that Trump is really bulking up for a showdown with China. Given Trump’s phone call with Taiwan, his threats to impose tariffs on Chinese imports, and his bellicose rhetoric about China’s role in the island dispute in the South China Sea, there does seem to be some good evidence for this possibility. But the Trump administration has recently dialed back the hostility. Trump himself assured Chinese leader Xi Jinping of U.S. commitment to the “one-China” policy. Tillerson followed with a visit in Beijing that emphasized “mutual respect.”

The uncomfortable truth is that Trump probably doesn’t have any specific war-fighting scenario beyond laying waste to ISIS territory and declaring mission accomplished over the smoking ruins. Rather, he wants to put the United States on a permanent war footing as a way to sustain his unpopular presidency.

Until a challenger emerges that can focus U.S. national security concerns, Trump will let fire at range of targets such as terrorists, journalists, and Germans. Perhaps his provocative rhetoric and actions will encourage some small country to stand up suicidally against the United States and allow Trump to declare a Grenada-like or Panama-like victory.

Like the $19.5 billion that the Trump administration is giving NASA for its Mars program, Trump’s war plans are a long shot. Casinos know that once a gambler wins on a long shot, they’ll go bankrupt trying to reproduce that once-in-a-lifetime event. Unfortunately, bankruptcy in Trump’s case means collective ruin for the rest of us.

Any chance we can convince NASA to send Trump on its first manned mission to Mars — so that he can return to the planet that birthed him?