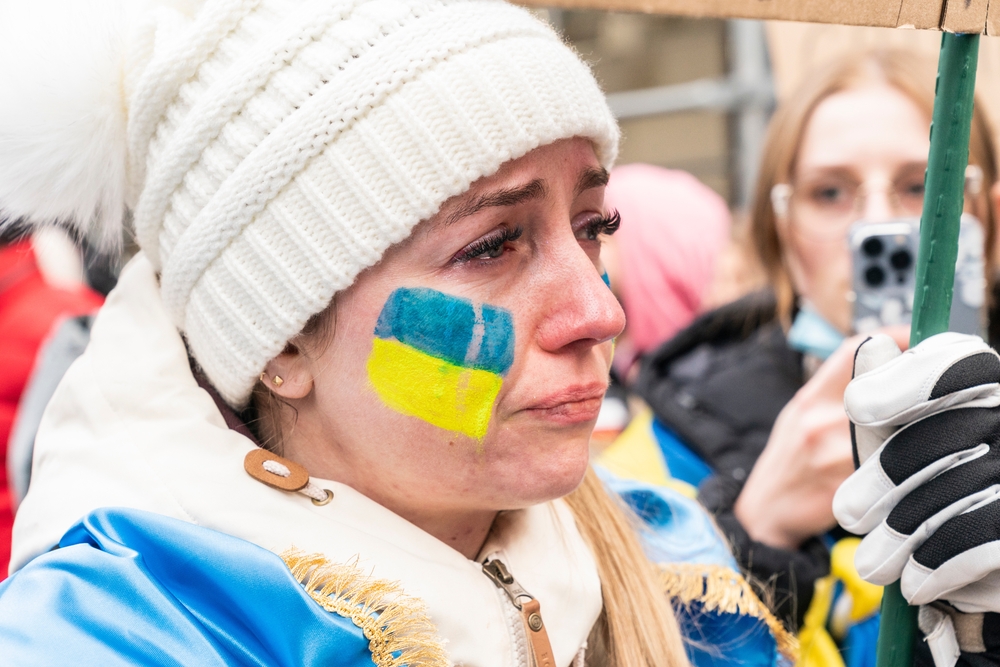 If Putinism is victorious in Ukraine, it will set a horrific precedent not only for other territorial grabs but also other attacks on democracy.
By John Feffer | March 9, 2022

War has been pretty much a constant in human affairs. If you’ve managed to avoid direct contact with war for your entire life, you are extraordinarily lucky in world-historical terms.

The Cold War that kept the peace across most of the Global North was accompanied by nearly non-stop proxy wars between Moscow and Washington throughout the Global South. With the exception of the war in Yugoslavia and several conflicts in the former Soviet Union, the post-1989 Cold Peace held thereafter across the Global North, even as wars continued to rage in the Persian Gulf, Rwanda, Sierra Leone, Algeria, Somalia, Afghanistan, Iraq, and elsewhere.

Historically, too, times of peace have been so rare that they have acquired an unusual mystique across the centuries. About 2,500 years ago, the Indian emperor Ashoka was disgusted with war after a particularly violent campaign against the feudal kingdom of Kalinga that cost at least 100,000 lives. As a result, he converted to Buddhism and promoted an ethos of non-violence. This respite from war didn’t last long, for Ashoka’s empire crumbled upon his death, and wars again convulsed the Indian subcontinent.

The peculiarity of relative peace for the Global North since 1945 has created a dangerous illusion that the richer citizens of the world are immune from deadly conflict. This illusion is so strong that current commentary on Ukraine often skips over the wars and genocide that took place in former Yugoslavia in the 1990s. It has created the embarrassment of journalists decrying the attacks on “people like us” as if the wars on “people unlike us” in the Global South were not worth mentioning or, worse, to be expected among the “uncivilized.”

The same bias extends to the treatment of the stream of refugees pouring out of Ukraine. As Nick Turse points out, even without the recent addition of Ukrainians, wars and human rights violations around the world have generated an exodus of 84 million people, which would qualify as the seventeenth largest country in the world if they all lived within the same borders. Europe and the United States have generally responded with a great deal more empathy for Ukrainians than they have to these other folks streaming out of the Global South.

Social media commentators have been quick to cry racism. That’s certainly part of it. But I would rather call it Northern privilege, which is a version of white privilege that extends to other members of the Global North who have enjoyed the peace of the last 75 years. Obviously, communities in the Global North that have been subjected to non-stop discrimination have not enjoyed that particular privilege.

One of our purposes at Foreign Policy In Focus has been to cover wars and human rights violations with the same degree of empathy and outrage regardless of where they occur. Because we are a U.S.-based publication, we have also tried to focus attention on conflicts for which the United States bears chief responsibility. After all, we feel a special obligation to change the one country’s foreign policy over which we have some influence, however marginal. We laud the critical foreign policy analysts in Russia, China, Brazil, Israel, and so on who all do the same.

Against this backdrop, however, here is why Ukraine matters.

The Terrible Opportunity of War

Every war is a failure.

It is a failure of human imagination.

For centuries, wars were a given. “War seems to be ingrained in human nature,” the philosopher Immanuel Kant once wrote. The desire to wage war was deemed a passion that could not be extirpated, merely channeled. The practice of war could be made more tolerable, through the Geneva Conventions or various arms control treaties. But particularly since the rise of the modern state, war was as endemic to human affairs writ large as murder has been in interpersonal relations writ small.

It is only in the last 100 years that the prospect of ending all wars has become anything more than delusional idealism. The creation of the United Nations in 1945 was an expression of this hope in institutional form. The emergence of the European Union, on a continent that had seen nothing but war for centuries, was another. The end of the European colonial project, the promulgation of human rights standards, the nuclear abolition movement: all these too have been steps toward a war-less future.

And yet, every war that has broken out over the last 100 years has been a repudiation of these hopes. Each one has been a horrifying déjà vu. How many countries have failed to subjugate Afghanistan? How many wars have swept through the land of Palestine? How many times has armed conflict broken out between India and Pakistan?

Each war has again reminded the world that this should not happen again, to anyone. Let’s be clear: no past war has been sufficiently acknowledged, no past victims sufficiently compensated, no broken vessels made right. But none of that should stop us from decrying the current conflict in Ukraine with full-throated opposition.

Each war provides us an unwelcome opportunity to improve our empathy, express our disgust at the slaughter of innocents, say never again once again. Outrage at what is happening today in Ukraine must augment, not subtract from, the outrage at Israeli conduct in Gaza, the Myanmar junta’s actions against the Rohingya, the Saudi attacks in Yemen.

The Assault on Democracy

If we support democracy, then we must oppose attacks on democracy. The Russian intervention is not just an assault on the people or the nation of Ukraine. It is an attack on a principle: that the collective decisions of a citizenry must be respected.

I opposed the U.S. wars in Afghanistan and in Iraq not because I had any love for the Talban or Saddam Hussein. I opposed those wars despite their murderous regimes.

Ukraine is different in that regard. It is a democracy. It’s flawed, like every democracy, but the system has represented the will of the people as expressed in free and fair elections. Yes, there was corruption. Yes, there were neo-Nazis organizing on the fringes. Yes, the country passed some stupid laws. But surely the same could be said of many democracies, including the United States.

Putin’s aggressive nationalism has been deployed, ostensibly, on behalf of the Russian-speaking minority in Ukraine. He is responding to NATO’s creep eastward. He insists on neutrality for countries on Russia’s borders and would roll back the membership in NATO of the Baltic countries if he could do so.

But Putin is also a fascist: authoritarian and illiberal, corporatist and militarist, and extremist in his social policies as well. He has made it his mission to forge an axis that unites similar types from Bolsonaro in Brazil to Assad in Syria. He has tried to undermine the European Union; he has meddled in the U.S. election; he has squashed whatever small shoots of democracy that have pushed through the Russian beton (concrete).

Am I demonizing Putin? I don’t have to. His statements and his actions speak for themselves.

Putin’s attack on Ukraine is an integral part of his campaign against democracy. If he wins, it will embolden all those who would like to consign democracy to the dustbin of history.

The Relevance to U.S.

Let’s imagine that Donald Trump succeeded in launching a coup once the 2020 election did not go his way. He would thereby have stuck a dagger deep into the belly of democracy. After that, what would he have done?

Shut down media that criticized him?

Turned Congress into his lapdog?

Unleashed the fossil fuel industry, shut U.S. borders to immigrants from all countries he didn’t like, installed nothing but cronies in positions of power?

In consolidating his power, in other words, Trump would have tried to follow Putin’s path. Given his ineptitude in launching a coup in the first place, Trump would not likely have succeeded in establishing himself as president for life. But that didn’t stop him from trying in 2020, and it won’t stop him from attempting to do the same in 2024 should he be given the opportunity. This should be enough to disqualify the man from occupying any position of authority ever again.

But let’s focus for a moment on foreign policy. Trump liked to style himself an anti-war president. But in fact, he couldn’t wait to order air strikes—in Syria, in Iraq, in Afghanistan. He would have invaded Venezuela if given half a chance. Even as he was heading out of office in 2020, he wanted to risk a major war by attacking Iran. It’s no surprise that Trump praised Putin as a “genius” for invading Ukraine, since Trump dreamed of having just such unconstrained power to deploy force when he was in the White House.

If Russia indeed achieves its aims in this war on Ukraine, other countries might decide to try something similar. China might attempt to seize Taiwan. Israel might retake the Gaza strip. Saudi Arabia might fully occupy Yemen.

But it’s the United States, with the most powerful military in the world, that I’m worried about. The Putin precedent may well inspire a Trumpist president in two short years. Unconstrained by the so-called guardrails, Trump or someone like him might well return to the unfinished business of attacking Iran or Venezuela. Or perhaps he would borrow more explicitly from Putin by launching an invasion of Cuba to install a U.S.-friendly regime.

This is why Ukraine matters. The death, the destruction, the forced migration: these must engage our attention, our empathy, our financial contributions. But we must also care about Ukraine because it’s yet another opportunity to strengthen our anti-war resolve and to redouble our commitment to democracy. And what’s happening halfway around the world might become our reality here in the United States two years hence, if we don’t mobilize to push back against Putinism wherever it rears its ugly head.