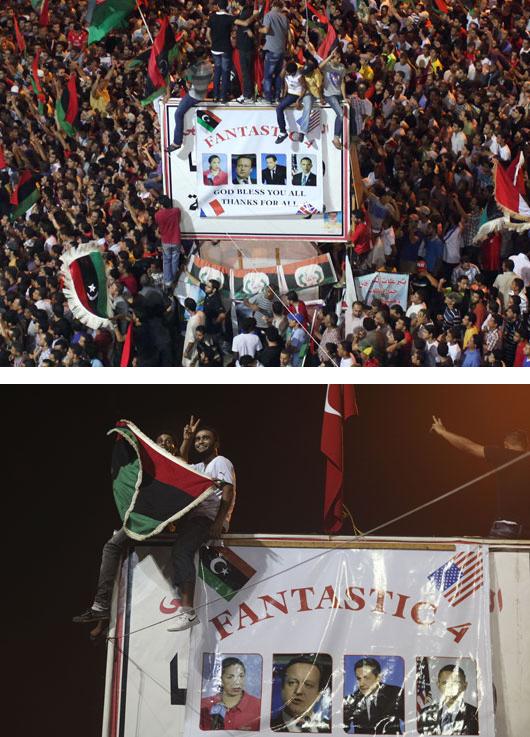 Why Are Some Progressives Gloating over Libya?

Even if the president led the NATO coalition from behind, he led his country into war from practically another planet.
By Peter Certo | August 25, 2011 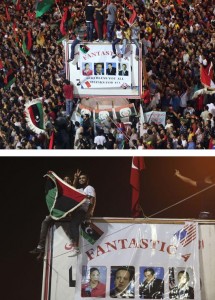 As presumably ousted Libyan leader Moammar Gaddafi remains in absentia, as Saif al-Islam Gaddafi emerges a free man after his alleged “capture,” as fighting continues in Tripoli, as murmurs pick up of NATO ground troops in Libya, and as myriad questions linger about the cohesion of the rebel forces who ousted Gaddafi and the intransigent loyalist forces who remain, it is easy enough to conclude that Libya’s civil war is far from settled.

Certainly, most post-mortems on the subject pay some or another degree of lip service to this particular narrative inconvenience, even as they also tell us what “lessons” there are to be gained from America’s latest encounter with regime change in the Middle East – on the vindication of “leading from behind,” on the extent to which President Obama is owed credit, on the effectiveness of NATO’s various methods of infiltrating the rebel ranks and coordinating their activities, and so forth.

This is more or less to be expected; journalists and bloggers have pressing deadlines and hungry audiences – and also perhaps editors who would find it remiss of them to pass up such a salient media hook just to gain a little more nuance or perspective.

However, there is something a bit unseemly about some of the coverage so far, and mostly it comes from progressive or Democratic-leaning outlets: boasting.

This was perhaps best encapsulated by a Think Progress tweet flagged by Glenn Greenwald, which asked, “Does John Boehner still believe military operations in Libya are illegal?” Greenwald, clearly irked, responded, “The towering irrationality of this taunt is manifest… What comments like this one are designed to accomplish is to exploit and manipulate the emotions surrounding Gaddafi’s fall to shame and demonize war critics and dare them to question the War President now in light of his glorious triumph.”

Greenwald points out, as have others since, that hardly anyone, whether critic or champion, ever doubted the ability of a NATO bombing campaign to oust Gaddafi. The realization of this objective (which, although it seems quaint to point out now, was not the objective authorized by the UN Security Council) is immaterial to questions about the legality, practicality, or appropriateness of the war – and this was of course a war, despite the White House’s weirdly Orwellian insistence to the contrary.

To the credit of Think Progress, which usually does commendable work uncovering the networks and rhetorical excesses of neoconservatives and sundry other militarists in the Washington establishment, it has also run cautionary posts about the “shades of Iraq” in Libya and on the uncertainties that lie ahead for the country. But for the most part these have succeeded or run alongside a handful of posts blasting various members of the GOP for “refusing” to credit President Obama with Gaddafi’s fall, or else a celebratory post showcasing a “Thank You” banner for the U.S. and its allies held up by Libyan demonstrators in Benghazi.

Certainly Libya is no Iraq or Afghanistan. And no doubt the hypocrisy of certain GOP politicians’ pronouncements on Libya, vis-à-vis their views on Iraq or Afghanistan (or even their previously stated views on Libya), has often bordered on breathtaking. It’s also admittedly hard not to be moved by the surreal scene of a U.S. president being honored in an Arab city – and not least at what the revolutionaries have accomplished so far.

But mostly I am taken by the similarities of such remarks to those that have appeared in neoconservative publications like Commentary, where editor Jonathan Tobin called the day of Tripoli’s fall “a bad day for Libyan intervention critics,” or the National Review, where torture apologist extraordinaire John Yoo declared that “Qaddafi’s fall should embarrass GOP isolationists,” even generously assessing the affair “a half-victory” for Obama.

Of course, it doesn’t really matter in the long run (or now, for that matter) whether the GOP gives any credit to Obama. And the efficacy of “leading from behind” is hardly the fundamental question about the U.S. approach to Libya, no matter how much mud some Republicans threw at it.

The crux of the matter is that even if the president led the NATO coalition from behind, he led his country into war from practically another planet. The administration scarcely shrugged when Congress voted against authorizing the Libya campaign, an authorization the administration had only sought belatedly because it was insisting all along that the United States was not actually “at war.” By then NATO was already waging a thinly veiled, open-ended campaign for regime change that hardly squared with the UN mandate to protect civilians in Benghazi (a mandate the United States may well have helped secure by agreeing to look the other way as Saudi Arabia helped quash the nascent democratic uprisings in Bahrain and beyond).

Unseemly developments still emanate from Tripoli: the $1.6 million reward Libyan business leaders have placed on Gaddafi’s head, for one, or the all-too-eager preparations of multinational oil companies to extract new contracts from the rubble of the Gaddafi regime – perhaps on the tail of UN or NATO ground troops. Progressives should be warier about gloating over another war that smells unsubtly of oil.

One hopes this chapter ends happily for the Libyan people, and certainly the taunts of Libya hawks will be endurable if it does. But no progressive should celebrate yet another circumvention – this one by a Nobel Peace Prize winner, no less – of the mechanisms intended to prevent the wanton and unaccountable waging o­f war.