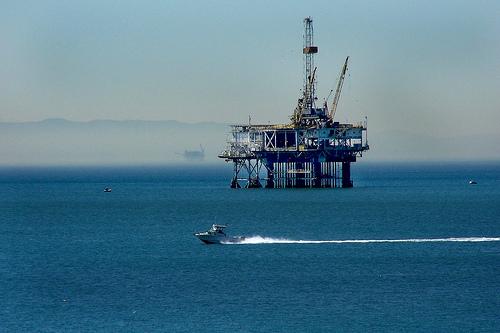 Why is Obama Drilling?

There's only so much oil in the ground, so what is the Obama administration thinking with its new offshore oil program?
By Frank Ackerman | April 7, 2010 Once upon a time, “There’s Only So Much Oil in the Ground” was a popular song that could be heard on the radio. The year was 1974, and Tower of Power, an Oakland-based soul and funk band, was enjoying some commercial success. They made the year’s top 100 with “What is Hip?” In addition to the important topics of being young, hip, and falling in and out of love, they sang about the energy crisis. Following a brief OPEC oil embargo, the price of crude oil (in today’s dollars) jumped from $23 per barrel in 1973 to $41 in 1974. Everyone was thinking about the world’s finite and diminishing supplies of oil. As the song continued, “Sooner or later there won’t be much around.”

What have we learned in the decades since OPEC, Tower of Power, and others brought the oil crisis to our attention? Back then, the Nixon administration’s energy policy included a big push to open the outer continental shelf to offshore oil and gas production. In 2010, the Obama administration has announced plans to open more of the outer continental shelf to oil and gas production.

We’ve been there, done that. And it didn’t work. Despite plenty of drilling, U.S.crude oil production reached its all-time peak in 1970, and began to fall rapidly and steadily after 1985. By 2008, it was barely half of its 1970 level.

What was the Obama team thinking? This administration is full of people who are way too smart to believe that offshore drilling will supply any noticeable part of our long-term energy needs. In the overly clever mode of partisan triangulation — is there any other mode in Washington? — it smells like a concession designed to get a few Republican votes for a climate change bill. Oddly enough, our national policy is now to increase fossil fuel production in the hopes of winning support for reducing fossil fuel consumption.

We can learn a painful lesson from the sorry state of energy policy today — and it’s not just that the hypothetical-filibuster rule, allowing 41 senators to effortlessly stop a vote, prevents Congress from taking action on almost everything.

Reflecting on the fact that there’s only so much oil, some environmental advocates have adopted the “peak oil” theory: When the world as a whole passes the peak and production starts to fall (as it already has for the United States), the fast-growing scarcity of oil will create a deeper crisis, forcing us to change our ways. As Tower of Power said, “Soon enough the world will watch the wells run dry.”

Although there’s only so much conventional oil, there is a much larger amount of oil shale, tar sands, extra-heavy oil, and other geological formations from which oil and gas can be extracted — at the cost of vast environmental damage. When oil was readily available at low cost, it wasn’t worth the effort to destroy large areas of Alberta to extract oil from tar sands. With oil currently hovering around $70-$80 per barrel, however, northern Alberta is one of the hot new properties for oil companies.

Counting the oil that could be extracted from tar sands, Canada is second only to Saudi Arabia in oil reserves. Venezuela, which is rapidly running through its conventional oil, has gigantic amounts of very heavy, dirty oil, perhaps exceeding the Saudi reserves. The United States has large oil shale reserves, under the Colorado River basin, and other formations from which natural gas could be extracted — including a big one under upstate New York, Pennsylvania, and West Virginia. If industry is allowed to experience the joy of breaking rocks, along with the resulting air and water pollution, big chunks of the Western Hemisphere could be pulverized to produce more fuel.

Solving our energy problems, without a change in direction, will lead to increasingly costly and environmentally destructive production — either deep offshore, or deep in the rocks below existing communities and watersheds. We need a tax (or a fee resulting from an allowance system) on energy, to keep the cost to consumers high enough to encourage conservation, while holding the price for producers low enough to discourage the pursuit of the worst fossil fuel deposits.

And the real answer to our energy problems? As Tower of Power told us back in the day, “Alternate sources of power must be found.” It’s got a beat; you could dance to it.

Frank AckermanFrank Ackerman is a senior economist at the Stockholm Environment Institute's U.S. Center, an affiliate of Tufts University, and a contributor to Foreign Policy In Focus. His latest book is Can We Afford the Future? The Economics of a Warming World (Zed, 2009). A version of this FPIF commentary will also appear on the Triple Crisis Blog, global perspectives on finance, development, and the environment.