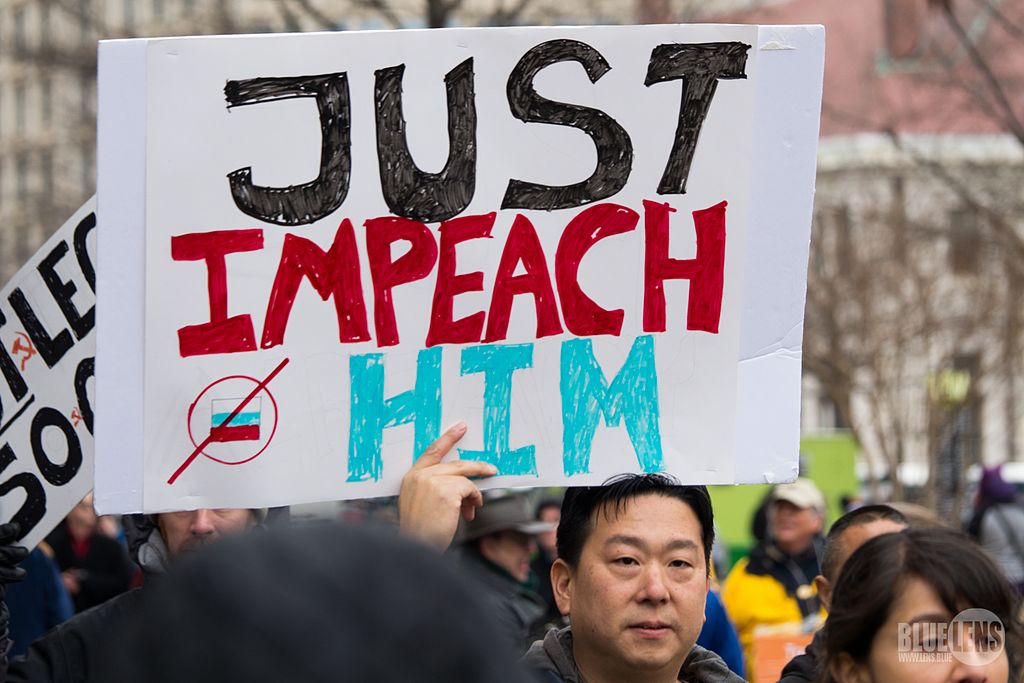 A protestor at Trump's inauguration (Mark Dixon via Wikimedia Commons)

The Democrats' impeachment strategy might backfire at the polls, but so too might Trump's polarization strategy.
By John Feffer | November 25, 2019

One of the hallmarks of a democratic political system is that voters change their minds. In North Korea, 100 percent of voters support the ruling party coalition in election after election. In South Korea since 1998, voters backed 10 years of progressive candidates followed by 10 years of conservative candidates. Then, after a dramatic turnaround in public opinion, South Koreans rallied to impeach the previous president, Park Geun-hye.

In the United States, meanwhile, voters elected Barack Obama to two terms and then opted for someone completely different in 2016. In fact, somewhere between six and nine million people who voted for Obama in 2012 switched to Donald Trump in 2016.

It’s difficult to know what will happen in the 2020 elections. But despite a number of scandals involving the Trump administration – officials resigning in disgrace like Secretary of the Interior Ryan Zinke or charged with wrongdoing like National Security Advisor Michael Flynn, allegations of corruption and violations of the emoluments clause of the Constitution, and foreign policy fiascos like the trade war with China and the abandonment of the Kurds in Syria – public opinion about the president has remained rather steady.

Americans have made up their minds about Donald Trump. For those who oppose the president, the evidence of wrongdoing coming out of the impeachment hearings is reinforcing their worst fears about the administration. Trump supporters, meanwhile, are following the lead of the Republican Party by dismissing the hearings as boring, trivial, or irrelevant.

This lack of variation in public opinion stands in marked contrast to the South Korean example. In September 2015, more than a year after the Sewol disaster, Park Geun-hye’s approval rating stood at 54 percent. Half a year later, it had fallen to a low of 31. 5 percent. By November 2016, as scandal engulfed the administration, her approval rate had dropped to 4 percent. Park Geun-hye, in other words, was not scandal-proof.

Yet no matter the number of offensive comments he makes or scandals that tarnish the reputation of his administration, Donald Trump can count on a secure base of support. These are the people who will stand by him even if, as Trump famously said, he shot someone in the middle of Fifth Avenue in New York City.

Of course, a base of support of 40 percent is not enough to win a head-to-head election. But Donald Trump doesn’t need to win the popular vote. Hillary Clinton won by nearly 3 million votes in 2016 but lost in the Electoral College. Her close loss by a combined total of 77,000 votes in three key states – Michigan, Pennsylvania, and Wisconsin – meant that those states’ electoral votes represented Trump’s margin of victory.

In 2020, Trump could lose by 5 million votes and still carry the Electoral College. In other words, he just needs to maintain his base of support in the key battleground states. He could even lose Michigan and Pennsylvania and still be reelected as long as he wins all the states he won in 2016. It doesn’t matter if everyone on the two coasts rejects him as long as he maintains an edge in the South, the Southwest, and the Midwest and Rust Belt.

Much depends on the U.S. economy. The unemployment rate is at 3.6 percent, which is very low. The stock market is booming.

But Trump is trying to do everything possible to prevent an inevitable recession from hitting before the 2020 election. The president has even called on the Federal Reserve to slash interest rates to below zero. The last time interest rates were zero was during the Great Depression. A negative interest rate would mean that the bank would essentially pay people to take out loans.

Trump knows that he only needs to get his numbers up by a couple percentage points in a couple key states – Wisconsin, Florida – in order to win in 2020. A strong economy is an essential part of his game plan.

His other strategy is to encourage political polarization. Trump knows that his incendiary comments about immigrants, his racially coded denunciations of African American and Latino members of Congress, and his all-out war on the Washington bureaucracy play very well with his base. The president continues to portray himself as an outsider willing to take extreme measures to battle a political status quo. American voters consistently want “change” – that’s why so many millions of people voted for Obama and then for Trump. At least 40 percent of the electorate believe that Trump is battling corrupt, entrenched interests.

The impeachment hearings, unfortunately for the Democrats, reinforce Trump’s narrative that he is David taking on the Goliath of the state. According to the president, he was just trying to root out corruption by enlisting the help of the Ukrainian president to investigate the alleged wrongdoing of Joe Biden’s son and the alleged interference of Ukraine in the U.S. elections in 2016. Trump’s base doesn’t believe that these allegations have been thoroughly debunked.

So, don’t expect Trump’s approval ratings to drop like Park Geun-hye’s during these impeachment hearings. The president will continue to argue that the Democrats are out to get him now through impeachment because they don’t think they can vote him out in the 2020 elections. However misleading that argument may be, Trump might be right about his chances in the next election.

Still, his strategy is risky. A polarizing platform and rhetoric can energize a political base. But it can also make just enough enemies to kill a political future.