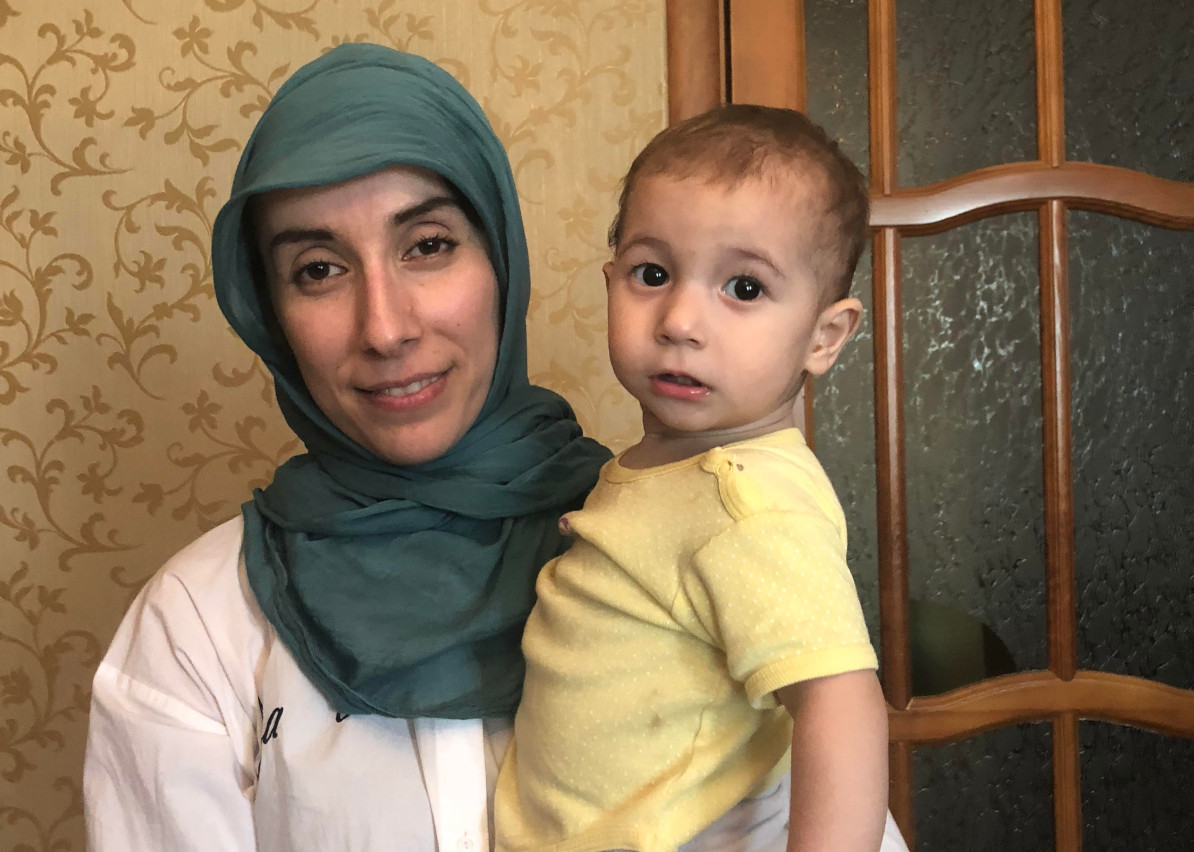 Will Russia Bring Home Children Who Lived in Islamic State?

Russia had a program to return Russian women and children from Iraq and Syria. What happened to it?
By Tanya Lokshina | August 14, 2018

“I thought she was in Turkey, close to the Syrian border, but still in Turkey… and then they told me she was in Iraq.” Galina’s eyes fill with tears as she picks at her salad in a Grozny cafeteria. “She is in prison in Baghdad.”

Galina Pratsak, 59, arrived in Chechnya from Bryansk, central Russia, hours before we met, hoping to retrieve her grandchildren from Baghdad with the help of a program for returning Russian women and children from Iraq and Syria. The program was started about a year ago by Ramzan Kadyrov, the head of Chechnya, with the Kremlin’s support.

Between August 2017 and February 2018, over 90 children and women arrived in Russia under its auspices, on special “humanitarian” flights to Grozny, Chechnya’s capital. Among those already returned are Russian nationals from Chechnya, Dagestan, Tatarstan, Bashkortostan, Oryol, and Moscow, as well as several from Kazakhstan, Kyrgyzstan, and other countries of the former Soviet Union. Most of the returnees are children. The few women who have returned are those the authorities in the areas of their capture chose not to prosecute. But now the program seems to have been suspended, without explanation.

Most of the foreign women and children currently in detention in Iraq belong to a group of more than 1,400 foreigners detained by Iraqi forces last August after the battle for the Islamic State (ISIS or IS) stronghold of Tal Afar ended. Since January, Iraq has proceeded with rushed trials against foreign women on charges of illegal entry and membership in or assistance to IS without sufficiently taking into account the individual circumstances of each case and sentencing most to life in prison or death by execution. Over 20 women of Russian origin already tried have all received life sentences.

Globally, Russia had the most active program to return detainees from Iraq and Syria, notably women and children. In fact, with Indonesia, Russia was the only country to take back women and children—until the US recently took back one American woman and her children. Some EU countries have taken nationals from Iraq but none from Syria so far (at least not publicly). All in all, when Russia’s returns program was launched in 2017, it represented a good practice. However, it is no longer active.

A Life Sentence in Iraq

In July, an Iraqi criminal court handed Galina’s daughter, 31-year-old Elena, a life sentence for illegal entry into Iraq and for supporting IS. She is in prison in Baghdad with her four children. The two older ones, Lilya and Rustam, were born in Bryansk, in 2008 and 2013 respectively. The younger ones are two-and-a-half-year-old Sakina and 16-month-old Djafar. Their grandmother said she found out only in December that they had been born in Iraq, in areas under IS control.

“We had video chats all the time,” she told me. “But it was always from inside the house. Her place was comfortable, and she and the kids seemed happy. And then toward the end of August last year, she sent me several messages saying things weren’t good any longer and she didn’t know what to do. She didn’t share any details, wouldn’t answer my questions, wouldn’t put the video on. I didn’t know what she was talking about. Then, they just disappeared. Months went by before I found out she and the kids were jailed in Baghdad, with other [captured] women and children.”

Galina is Russian Orthodox. Her daughter married a man of Tajik origin who was not religious but didn’t mind when Galina baptized Lilya. He was naturalized in Russia and joined the Russian army when Lilya was a baby. Instead of returning home after two years of service, he travelled to Tajikistan. Elena and Lilya stayed with Galina. Lilya was two-and-a-half when Galina realized, while giving her a bath, that the girl’s little cross was missing. She asked Elena about it, and her daughter said she and Lilya had embraced Islam.

“A few weeks later, she started wearing a long skirt and full sleeves. Eventually, she donned a hijab. Then, she told me her husband had moved to Turkey and she and Lilya will join him there. So, they left,” Galina said.

Elena kept in touch with her mother, and in early 2013 returned to Bryansk, five months pregnant. She gave birth to Rustam and stayed at her mother’s home with the children until he was 14 months old before returning, supposedly to Turkey. Soon afterward, Elena told Galina during one of their frequent chats that the children’s father died and that Elena had remarried.

She gave birth to Sakina and Djafar with her second husband and kept reassuring Galina that he was a good man and treated the children from her first marriage just like his own. Galina enjoyed her video sessions with Elena and the kids. She would have preferred to have them close by, but at least it seemed her daughter had a beautiful family and kept a good house.

Elena was last in contact with Galina on August 26, 2017. As time went by with no updates from her daughter, Galina did not know where to turn. Finally, on December 20, the human rights ombudsman for Bryansk shocked her with the news that Elena and the children were in an Iraqi jail, and that Elena was awaiting trial on charges of membership in IS.

Human Rights Watch cannot determine what Elena’s role was during the time she lived in IS-controlled territory. Her mother, however, is adamant.

“Yes, I understand, it’s a terrorist organization and my daughter lived under their auspices.” Galina looks up from her barely touched plate of food. “But she is no terrorist! The pregnancies, the births, the nursing, the household—that’s all she did. And they [Iraqi authorities] are saying that as long as she lived with one of those men, cooked, cleaned, it makes her a participant and she will spend the rest of her life in jail. I just cannot wrap my brain around it…”

Human Rights Watch has interviewed close relatives of four of these women in Russia and they all emphasized, like Galina, that the women’s activities in IS were limited to having children and taking care of the household.

Although Human Rights Watch cannot verify the claims about any particular woman’s role under IS, there have been well-publicized reports indicating that under IS many women were limited to homemaking and most were subject to restrictions on their movement. Basic due process requires that any prosecutions guarantee women the opportunities to raise defenses, including whether they were coerced or did not knowingly engage in criminal conduct. Courts should examine evidence regarding each woman’s actions and issue convictions and sentences only where they are supported by evidence of individual culpability.

Iraq should change its approach and consider alternatives to criminal prosecution for those against whom there is no evidence that they were combatants or involved in committing serious crimes. Russia should consider repeated requests by the relatives of already sentenced women to discuss with the Iraqi government the possibility of transferring the women to Russia to serve their sentences on Russian soil.

With respect to foreign children, their well being should be a priority for all parties involved. In December 2017, just a few days before Galina found out about the fate of her daughter and grandchildren, President Putin said in a news conference, “Children, when taken to armed conflict zones, did not make a decision to go there and we have no right to abandon them there.” He commended Kadyrov on his work on returns.

Many families desperate to bring their loved ones back from Syria and Iraq took his words as a sign that the returns program would be further developed and many more flights with returnees would follow. Instead, the program appears to have been suspended in early 2018, with no explanation. The families knock on all doors, but their increasingly desperate questions remain unanswered.

Russia should resume the returns of children, either under the auspices of the so-called Kadyrov program or by other means. In carrying out the returns, Russian authorities should not discriminate between children born on Russian soil and children born to a parent of Russian origin, as long as the best interests of the children are being served and parental consent for the children’s return is sought.

Galina came to Grozny to hand over her grandchildren’s birth certificates and give power of attorney to a leading representative of Kadyrov’s returns program, who promised to bring the children back to Russia if the circumstances allow.

“They don’t know when, but they will try… Though I thought all the four kids could be brought back but they’re now saying it’s only about the two elder ones because the littlest ones weren’t born here. So, at least those two… But what about the other two? What will happen to them? And my daughter, will she die there in jail? Couldn’t she serve her sentence in Russia? I’d bring the children to visit her as often as possible. If I get the children back, that is,” Galina sighs looking at me for answers, answers I don’t have.

Tanya Lokshina is associate Europe and Central Asia director at Human Rights Watch, based in Moscow.