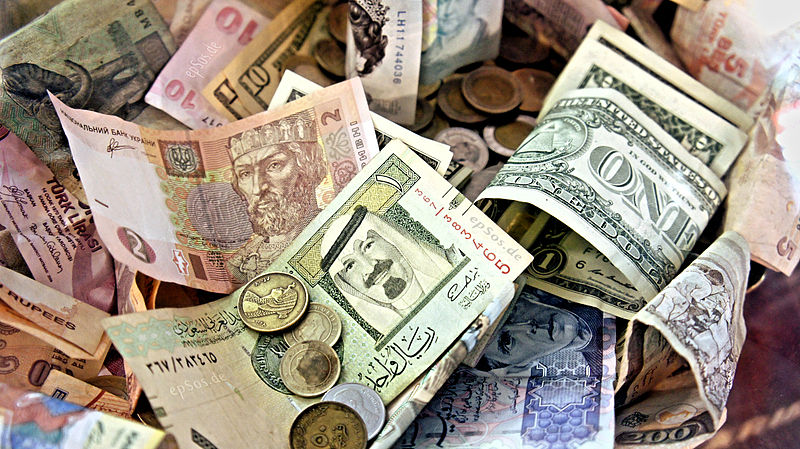 The recent round of sanctions aimed at Moscow over the crisis in Ukraine could backfire on Washington by accelerating a move away from the dollar as the world’s reserve currency. (Photo: Wikimedia Commons)

Will Sanctions Sideline the U.S. Dollar?

The recent round of sanctions aimed at Moscow could backfire on Washington by accelerating a move away from the dollar as the world’s reserve currency.
By Conn Hallinan | August 21, 2014

The use of sanctions as an international cudgel has long been complicated by some nasty unintended consequences.

For the United States and the world economy, one consequence could be particularly significant: The recent round of sanctions aimed at Moscow over the crisis in Ukraine could backfire on Washington by accelerating a move away from the dollar as the world’s reserve currency.

While in the short run American actions against Russia’s oil and gas industry will inflict economic pain on Moscow, in the long run the U.S. government may lose some of its control over international finance.

A World Beyond the IMF

Proposals to move away from using the dollar as the international currency reserve are by no means new. Back in 2009, the Shanghai Cooperation Organization (SCO) proposed doing exactly that. SCO members include Russia, China, Kazakhstan, Kyrgyzstan, Tajikistan, and Uzbekistan. Afghanistan, Iran, India, Pakistan, and Mongolia have SCO observer status, and the organization has close ties with Turkey and the Association of Southeast Asian Nations.

Ever since the 1944 Bretton Woods Conference, the world’s finances have been dominated by the U.S. dollar, the International Monetary Fund (IMF), and the World Bank. But according to economist Jeffrey Sachs, that world is vanishing. The dollar cannot continue to hold the high ground, Sachs says, because “the role of the United States in the global economy is diminishing.”

While it may be diminishing, the United States and its European allies still control the levers of international finance. For example, the U.S. slice of the global GDP is 19.2 percent, and its share of IMF voting rights is 16.8 percent. In contrast, China, with 16.1 percent of the global GDP, has only 3.8 percent voting rights in the IMF. The presidency of the organization is reserved for a European.

In 2010, the World Bank “reformed” its voting rights to increase low and middle-income countries from 34.67 percent to 38.38 percent, although even this modest adjustment has been sidelined because the U.S. Senate refuses to accept it. The wealthier countries still control more than 60 percent of the vote. The presidency of the Bank normally goes to an American.

In early August of this year, the BRICS countries—Brazil, Russia, India, China, and South Africa—launched a series of initiatives aimed at altering the current structure of international finance. Besides pushing to dethrone the dollar as the world’s reserve currency, the organization created a development bank and a Contingent Reserve Arrangement (CRA). The former would allow countries to bypass the IMF and the World Bank, with their tightfisted austerity fixation, and the latter would give countries emergency access to foreign currency.

The development bank will start off with $50 billion in the kitty, but that will soon double. The BRICS will also be able to draw on $100 billion from the CRA. While by international standards those are modest sums—the IMF has close to $800 billion in its coffers—the BRICS bank and CRA has just five members, while the IMF serves hundreds of countries. Eventually the BRICS observer members may be able to tap into those funds.

Last month’s sanctions went straight for Russia’s jugular vein: the development of its massive oil and gas reserves and Moscow’s construction of the South Stream pipeline. When completed, South Stream will supply Europe with 15 percent of its natural gas and generate over $20 billion in annual profits. Indeed, there is suspicion among some Europeans that the real goal of the sanctions is to derail South Stream and replace it with U.S. shale-based American oil and gas.

Sanctions can do enormous damage.

The United Nations estimates that the sanctions against Iraq were responsible for the deaths of some 500,000 Iraqi children from 1991 to 1998.

The sanctions aimed at Iran’s oil and gas industry have cut deeply into government revenues—80 percent of the country’s foreign reserves are generated by hydrocarbons—resulting in widespread inflation, unemployment, and a serious national health crisis. While humanitarian goods are not embargoed, their cost has put medical care beyond the reach of many Iranians.

Associated Press reporter Nasser Karimi wrote last year that some medicine and medical equipment costs have risen 200 percent: “radiology film up 240 percent; helium for MRIs up 667 percent; filters for kidney dialysis up 325 percent.” The cost of chemotherapy has almost tripled.

Iran’s exclusion from the Society for Worldwide Interbank Financial Telecommunication (SWIFT) makes it impossible to transfer funds electronically. That, in turn, makes buying the raw materials to manufacture generic medicines expensive and difficult.

The recent crash of an Iranian passenger plane that killed 39 people was, in part, the result of sanctions. Because Iran cannot purchase spare parts for its Boeing and Airbus planes, it is forced to use alternatives, like the trouble-prone Ukrainian-made A-140 aircraft that went down on August 10. Another A-140 crashed in 2002, killing 46 passengers.

In short, opposing the U.S. and its allies can be dangerous to one’s health.

There is growing opposition to the widespread use of sanctions, as well as to the ability to isolate countries from international finance by excluding them from things like SWIFT. Coupled with this is a suspicion that the United States uses its currency to support its own economy at the expense of others.

After the 2007-2008 economic meltdown, for example, the U.S. central bank lowered its interest rates and increased its money supply, thus making U.S. exports cheaper and other countries’ imports more expensive. Developing countries have blamed these policies for artificially driving up the value of their currencies and thus damaging their export-driven economies. Brazilian Finance Minister Guido Mantega calls it waging “currency war.”

With the United States now pushing higher interest rates and throttling back on buying foreign bonds, many developing countries fear that international capital will flow back to the U.S., leaving countries like Brazil high and dry.

As long as the world’s reserve currency is in dollars, the U.S. will be able to manipulate global finance and block countries like Iran from any transactions using dollars. But that may be coming to an end. With China set to replace the United States as the world’s largest economy, it is only a matter of time before the renminbi—or some agreed upon international method of exchange—replaces the dollar.

China is already moving toward bypassing New York as the world’s financial center, instead routing its finances through Hong Kong and London. “There can be little doubt from these actions that China is preparing for the demise of the dollar, at least as the world’s reserve currency,” says Alasdair Macleod of GoldMoney, a leading dealer in precious metals.

A number of countries are already dealing in other currencies. Australian mining companies, for example, have recently shifted to using China’s renminbi.

How dumping the dollar will affect the United States is not clear, and predictions of the impact range from minor to catastrophic. What will almost certainly happen is that the United States will lose some of its clout in international finance, making it easier for developing countries to move away from the American economic model of wide-open markets, fiscal austerity, and hostility to any government role in the economy.

Diminishing the role of the dollar may make it harder to apply sanctions as well, particularly in those areas where Washington’s policies are increasingly alienated from much of the world, as in Iran, Cuba, and Russia. The European Union (EU) has sanctioned Russia over Ukraine, but not to the extent that the United States has. The EU’s trade with Russia is a major part of the Europe’s economy, while Russian trade with the United States is minor. And the BRICS—who represent almost a quarter of the world’s GDP and 40 percent of its population—did not join those sanctions.

Addressing the BRICS delegates in Fortaleza, Brazil, Russian President Vladimir Putin said that “together we should think about a system of measures that would help prevent the harassment of countries that do not agree with some foreign policy decision made the by the U.S. and their allies.”

In the long run, the EU may come to regret that it went along with Washington. German industry has taken a big hit—trade with Russia fell 20 percent from January through May—and Russia’s ban on EU agricultural products has badly hurt Poland, Lithuania, Germany, Denmark, Latvia, Finland, and the Netherlands. Indeed, European Central Bank president Mario Draghi warned that the current EU recovery is extremely fragile and that sanctions could push it back into recession.

The Germans are especially worried that Russia will turn to Asia, permanently cutting Berlin out of Moscow’s economic sphere.

There are enormous changes ahead as a result of climate change and population growth. While there has been a reduction in the number of people living in extreme poverty—that is, making less than $1.25 a day—a great deal of that reduction has occurred in China. Things have actually gotten worse in parts of Asia and Africa.

By 2050 the world’s population will grow to 9 billion, and 85 percent of that growth will be in developing nations, the very countries that most need help to confront the consequences of that future.

Unless the institutions of international finance are wrested from the control of a few wealthy nations, and unless there are checks on the ability of the United States and its allies to devastate a country’s economy over a disagreement on foreign policy, those figures bode for some serious trouble ahead.

FPIF columnist Conn Hallinan can be read at www.dispatchesfromtheedgeblog.wordpress.com and www.middleempireseries.wordpress.com.