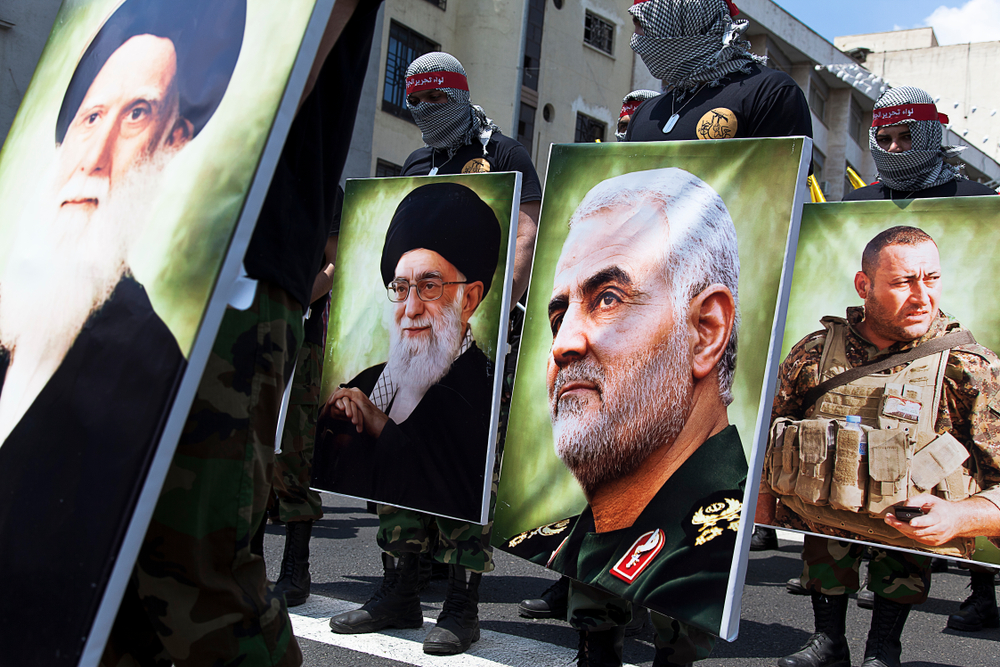 Will Trump’s Blunders in Iraq Lead to War With Iran?

In addition to threatening a disastrous war with Iran, Trump's blundering has provoked a massive political crisis in Iraq.
By Medea Benjamin, Nicolas J.S. Davies | January 3, 2020

It’s a new year, and Americans are waking up to a new U.S.-made crisis in the Middle East.

First, the U.S. attacked Kata’ib Hezbollah, an Iraqi militia that had been a major U.S. ally in the war against the Islamic State (IS). Now, also in Iraq, the U.S. has assassinated Iranian General Qassem Soleimani, the commander of the Quds Force, an elite regiment in the Iranian Revolutionary Guard Corps, whose support and training of Iraqi forces was key to the defeat of IS.

It would be hard to overstate the inflammatory nature of this dramatic U.S. escalation of hostilities against Iran. As former U.S. Vice President Joe Biden said, “President Trump just tossed a stick of dynamite into a tinderbox.”

In Iran, the effect of the assassination will surely be to unite Iranians in support of their armed forces — and to strengthen political hardliners who have always insisted that the U.S. does not want peace, and that diplomatic negotiations and agreements with the U.S. are a waste of time. A housewife in Tehran told Reuters, “I am not a pro-regime person but I liked Soleimani. He was brave and he loved Iran. I am sorry for our loss.”

The U.S. has until now waged economic, information, and proxy warfare against Iran, but has held back from open war. Congress has not granted the president any legal authority to use military force against Iran, and this was reiterated in an amendment to the House version of the FY2020 NDAA military budget bill, but unfortunately eliminated from the final bill.

In the same strike that killed General Soleimani, the U.S. also killed Abu Mahdi al-Muhandis, the head of Kata’ib Hezbollah and the military commander of Iraq’s Popular Mobilization Units (PMU). The Popular Mobilization Units (PMU) were recruited to fight the Islamic State after the Iraqi armed forces collapsed and Mosul, Iraq’s second-largest city, fell to IS in June 2014, and they have played a major role in the defeat of IS in Iraq.

The first six PMUs were formed by five Shiite militias that all received support from Iran, plus Muqtada al-Sadr’s Iraqi nationalist Peace Company, the reincarnation of his anti-occupation Mahdi Army militia, which he had disarmed in 2008 under an agreement with the Iraqi government.

Kata’ib Hezbollah was one of those five original Iranian-backed militias, and it existed long before the fight against IS. It was founded before the U.S. invasion of Iraq in 2003, and was part of the Iraqi resistance during the U.S. occupation. In 2011, it reportedly had 1,000 fighters, who were paid $300 to $500 per month, probably funded by Iran. It fought fiercely until the last U.S. occupation forces were withdrawn in December 2011, and claimed responsibility for a rocket attack that killed five U.S. soldiers in Baghdad in June 2011.

Since forming a PMU in 2014, its leader, Abu Mahdi al-Muhandis, has been the overall military commander of the PMUs, reporting directly to the national security adviser in the Iraqi Prime Minister’s office.

In the fight against IS, the PMUs proliferated quickly. Most political parties in Iraq responded to a fatwa by Grand Ayatollah al-Sistani to form and join these units by forming one of their own. At the peak of the war with IS, the PMUs comprised about 60 brigades with hundreds of thousands of Shia fighters, and also included up to 40,000 Sunni Iraqis.

The U.S. and Iran both provided a great deal of military support to the PMUs and other Iraqi forces during the fight against IS, and the Iraqi Kurdish peshmerga have also received support from Iran.

Secretary of State John Kerry met with Iranian Foreign Minister Javad Zarif in New York in September 2014 to discuss the crisis, and U.S. Ambassador Stuart Jones said in December 2014: “Let’s face it, Iran is an important neighbor to Iraq. There has to be cooperation between Iran and Iraq. The Iranians are talking to the Iraqi security forces and we’re talking to Iraqi security forces… We’re relying on them to do the deconfliction.”

Provoking a Crisis in Iraq 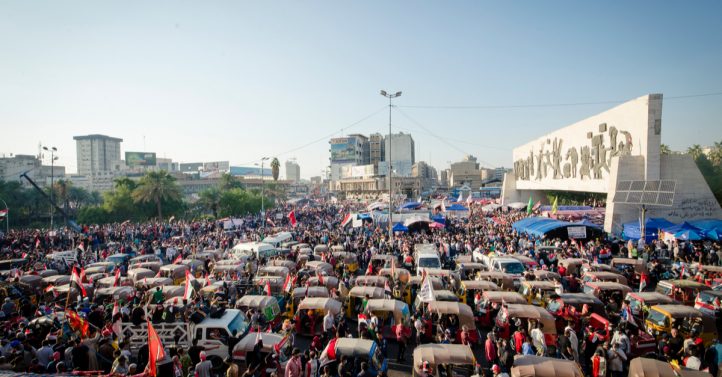 U.S. officials and corporate media are falsely painting Kata’ib Hezbollah and the PMUs as independent, renegade Iranian-backed militias in Iraq, but they are an official part of the Iraqi security forces. As a statement from the Iraqi prime minister’s office made clear, the U.S. airstrikes on December 29th were an “American attack on the Iraqi armed forces.” And the PMUs were not just any Iraqi military forces, but forces that have borne the brunt of some of the fiercest fighting against the Islamic State.

New hostility between U.S. forces and Kata’ib Hezbollah began six months ago, when the U.S. allowed Israel to use U.S. bases in Iraq and/or Syria to launch drone strikes against Kata’ib Hezbollah and other PMU forces in Iraq. There are conflicting reports on exactly where the Israeli drones were launched from, but the U.S. had effective control of Iraqi airspace and was clearly complicit in the drone strikes.

This led to a campaign by Muqtada al-Sadr and other anti-occupation parties and politicians in the Iraqi National Assembly to once again call for the expulsion of U.S. forces from Iraq, as in 2011, and the U.S. was forced to accept new restrictions on its use of Iraqi airspace.

Then, at the end of October, U.S. bases and the Green Zone in Baghdad came under a new wave of rocket and mortar attacks. While previous attacks were blamed on the Islamic State, the U.S. blamed the new round of attacks on Kata’ib Hezbollah.

After a sharp increase in rocket attacks on U.S. bases in December, including one that killed a U.S. military contractor on December 27, the Trump administration launched air strikes on December 29 that killed at least 24 members of Kata’ib Hezbollah and wounded 55. Prime Minister Abdul-Mahdi called the strikes a violation of Iraqi sovereignty and declared three national days of mourning for the Iraqi troops that U.S. forces killed.

The U.S. attacks also led to massive protests that besieged the U.S. Embassy and former U.S. occupation headquarters in the Green Zone in Baghdad. U.S. forces at the embassy reportedly used tear gas and stun grenades against the protesters, leaving 62 militiamen and civilians wounded.

After the siege, the Trump administration announced that it would send more troops to the Middle East.

Apart from their impact in Iran, the U.S. air strikes and assassinations have inflamed popular and political pressure on the Iraqi government to close the U.S. bases in Iraq.

In fact, if Kata’ib Hezbollah was indeed responsible for the rocket and mortar attacks, this is probably the chain of events they intended to provoke. Incensed at the Trump administration’s blatant disregard for Iraqi sovereignty and watching their country being dragged into a U.S. conflict with Iran that is spiraling out of control, a broad swath of Iraqi political leaders are calling for the expulsion of U.S. forces.

The U.S. military presence in Iraq was reestablished in 2014 as part of the campaign against the Islamic State, but that campaign has wound down substantially since the near destruction and reoccupation of Mosul, Iraq’s second largest city, in 2017. The number of attacks and terrorist incidents linked to the Islamic State in Iraq has declined steadily since then, from 239 in March 2018 to 51 in November 2019, according to Iraq researcher Joel Wing. Wing’s data makes it clear that IS is a vastly diminished force in Iraq.

The real crisis facing Iraq in 2019 was not IS but massive public protests, starting in October, against the dysfunction of the Iraqi government itself. Months of street protests forced Prime Minister Abdul-Mahdi to submit his resignation, and he is now simply acting as a caretaker pending new elections. Severe repression by government forces left over 400 protesters dead, but this only fueled even greater public outrage.

The demonstrations were not just directed against individual Iraqi politicians or against Iranian influence in Iraq, but against the entire post-2003 political regime established by the U.S. occupation. Protesters blame the government’s  sectarianism, its corruption, and the enduring foreign influence of both Iran and the U.S. for its failure to invest Iraq’s oil wealth in rebuilding Iraq and improving the lives of a new generation of young Iraqis.

Within Iraq, U.S. attacks on Iraqi forces can only work in favor of Iran, turning Iraqi public opinion and Iraqi leaders more solidly against the U.S. military presence. So why did the U.S. jeopardize what influence it still had in Iraq by launching airstrikes against Iraqi forces?

And why has the U.S. maintained a reported 5,200 U.S. troops in Iraq, at Al-Asad airbase in Anbar province and smaller bases across Iraq? It already has nearly 70,000 troops in other countries in the region, not least 13,000 in neighboring Kuwait, its largest permanent foreign base after Germany, Japan, and South Korea.

While the Pentagon has insisted that the U.S. troop presence is solely to help Iraq fight ISIS, Trump himself has defined its mission as “also to watch over Iran.” He told that to U.S. servicemen in Iraq in a December 2018 Christmas visit and reiterated it in a February 2019 CBS interview.

Iraqi Prime Minister Abdul-Mahdi has made clear that the U.S. does not have permission to use Iraq as a base from which to confront Iran. Such a mission is patently illegal under Iraq’s 2005 constitution, drafted with the help of the United States, which forbids using the country’s territory to harm its neighbors

Under the 2008 Strategic Framework Agreement between the U.S. and Iraq, U.S. forces may only remain in Iraq at the “request and invitation” of the Iraqi government. If that invitation is withdrawn, they must leave, as they were forced to do in 2011. The U.S. presence in Iraq is now almost universally unpopular, especially in the wake of U.S. attacks on the Iraqi armed forces they are supposedly there to support.

A Moment of Reckoning

Trump’s effort to blame Iran for this crisis is simply a ploy to divert attention from his own bungled policy. In reality, the blame for the present crisis should be placed squarely on the doorstep of the White House itself. The Trump administration’s reckless decision to withdraw from the 2015 nuclear deal with Iran and revert to the U.S. policy of threats, sanctions, and covert and proxy warfare that never worked before is backfiring as badly as the rest of the world predicted it would, and Trump has only himself to blame for it.

So will 2020 be the year when Donald Trump is finally forced to fulfill his endless promises to bring U.S. troops home from at least one of its endless wars and military occupations?

Or will Trump’s penchant for doubling down on brutal and counterproductive policies only lead us deeper into his pet quagmire of ever-escalating conflict with Iran, with the U.S.’s beleaguered forces in Iraq and all over the Middle East as pawns in yet another unwinnable war?

We hope that 2020 will be the year when the American public finally looks at the fateful choice between war and peace with 20/20 vision, and that we will start severely punishing Trump and every other U.S. politician who opts for threats over diplomacy, coercion over cooperation, and war over peace.