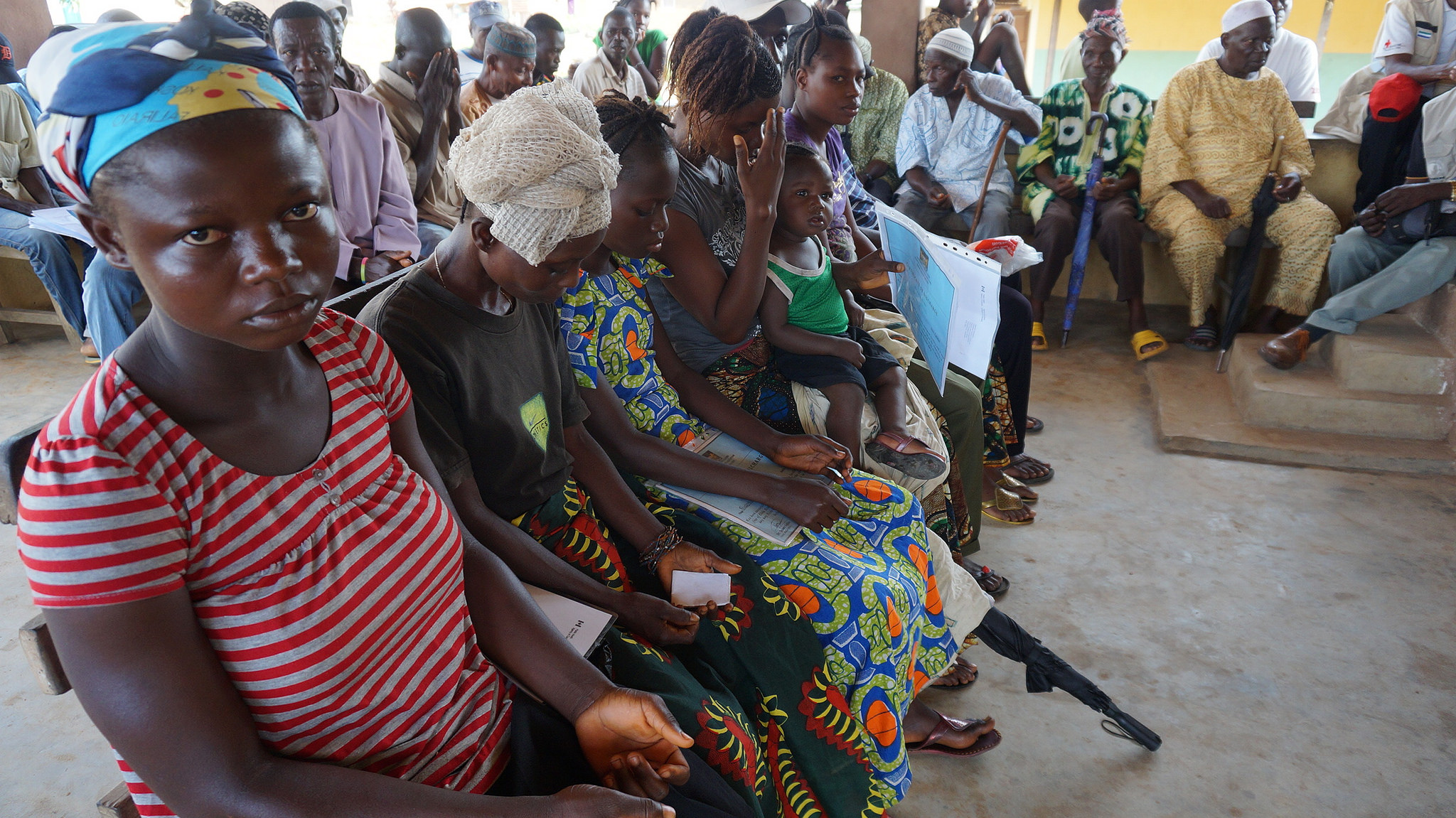 The disproportionate impact of the West African Ebola outbreak on women has highlighted the need for much deeper investment in the health, education, and empowerment of women and girls in the region. (Photo: European Commission DG ECHO / Flickr)

How Women Are Bearing the Brunt of the Ebola Epidemic

Three-quarters of Ebola victims are women, with caretakers especially at risk.
By Krista Walton Potter | October 13, 2014

The deadliest Ebola outbreak on record is sweeping West Africa, with over 3,400 lives claimed already. The World Health Organization estimates that 20,000 additional cases will be reported by November. And women are being affected most severely. In fact, 75 percent of those who have died from Ebola are women.

“Women have been affected in so many, many ways. Even though the disease of course affects both men and women, women are at a disadvantage—period,” says Marpue Speare, executive director of the Women’s NGO Secretariat of Liberia (WONGOSOL). “Women are on the front lines. They are the caregivers. Protective gear can be used to help, but women are dying from simple things that can be prevented.”

The need for caretakers is especially acute in rural communities where there are few health clinics, leaving women to feed, wash, and care for Ebola victims without even basic protections such as gloves, goggles, or masks, making them extremely vulnerable to contracting the virus. Women also participate in burial rites that require handling infected bodies.

Global Fund for Women is acting quickly to provide crisis support to some of our long-standing grantee partners in Ebola-hit communities in Liberia. Through these groups, we learn how women are being disproportionately affected by the outbreak.

Local Organizations Pick Up the Slack

“The crisis is the worst in the Liberia’s history after the civil upheaval that lasted for 14 years,” says Zaye Fanyean Zarweah of Give Them Hope, Inc., a Global Fund for Women grantee partner. “Everyone lives in fear not knowing who the next victim will be to this deadly virus. Some health workers describe an infected community or region as living near the gate of hell.”

Infection rates are rising in part because of a widespread lack of basic knowledge about the causes of the disease and how it is spread, as well as the reluctance of many to seek treatment, often out of fear. For this reason trusted community-led organizations that already have roots in affected areas play an especially important role. “[WONGOSOL] is working through our network members to tap into their own communities so that you don’t have to bring in people from the outside,” says Speare. “It works better because they have those relationships within the community. They know if a case is not yet reported, they know the right people to give them the right help. They respond better because they know one another—they are like family.”

With hospitals overwhelmed with Ebola patients, local organizations must pick up the slack, especially in rural communities. For example, WONGOSOL is setting up hand-washing stations in various communities that have been quarantined, and providing access to basic hygiene to families who cannot afford chlorine, soap, and sanitizer to prevent the spread of the virus.

Another Global Fund for Women grantee partner, the West Point Women for Health and Development Organization (WPWHDO), works in the urban community of West Point in the capital of Monrovia. WPWHDO has opened a mini care center that will meet the health care needs of people presenting symptoms but who have to wait days to be taken to the nearest hospital, a symptom of the country’s long-standing infrastructure problems.

“The country is still emerging out of war even though the war ended in 2003. There are extremely limited health facilities,” says Muadi Mukenge, the Global Fund for Women’s program director for Sub-Saharan Africa. “Women are not able to reach facilities, particularly women living in rural communities. There aren’t that many facilities to begin with, so you often have to go to another district or another province. More than 80 percent of the population lives under the poverty line, so money for transport is scarce. The health system itself is particularly weak and women are feeling the brunt of that.”

No Room for Maternal Healthcare

Even women who do not contract Ebola are at risk, as the current crisis has pushed the country’s health system to the brink. “Most hospitals and clinics across the country are closed for lack of protective materials and drugs,” says Zarweah of Give Them Hope, which works with women in rural Upper Nimba County, improving maternal health services through a health clinic it operates, and offering skill-based training and education to develop more women leaders in the community.

Maternal health services are especially important in the wake of the Ebola outbreak. With the already-insufficient healthcare facilities stretched even thinner as they try to care for the many infected Ebola patients, pregnant women are not able to access the care they need.

“As we speak, pregnant women and babies are very vulnerable, as no health worker is willing to touch patients, especially in the rural area in Nimba where we serve,” says Zarweah. “Pregnant women are left on their own to deliver themselves on bare roads on the street. Hundreds of people have died of the virus and many pregnant women and children have died for lack of attention and intervention.”

Global Fund for Women allies on the ground say Ebola is also taking a serious toll on survivors. “Ebola survivors are being stigmatized. If a family suffers from Ebola and they lost their loved ones because of the virus, people don’t want to associate with them,” says Speare.

Children orphaned by the disease are also stigmatized. Current reports estimate that 3,700 children have lost one or both parents so far due to Ebola. “People don’t want to associate with [the orphans] because their parents have died, and they are afraid the children have the disease,” Speare adds. “The children are also being isolated [by health workers] to make sure they are not infected. It is traumatizing for them.”

“Telling the community how to receive these people and accept them back into the community is a major issue,” says Speare. “With a situation like that they have lost everything. There is absolutely nothing when they get back home—no community and no support.”

How to Move Forward

The impact of the current Ebola epidemic on Liberians will be long-term. “In Monrovia, ambulances collect bodies every day from different communities. If you are here, you can see when people hear the sirens and see the ambulance go by, people on the sidewalk get very quiet and are very sad,” says Speare. “People who have survived have been neglected, and they are traumatized. Counseling needs to be taken seriously. Children who have lost their parents need to be supported. We need to look at women, specifically pregnant women, and caretaker women who need protective gear.”

In order to help women on the road to recovery after the crisis—and to prevent backsliding when the next crisis hits—experts say investments need to be made in women and girls’ health, education, and empowerment on a continual basis.

“The fragility of health services in Liberia is reflected in the fact that only 7 percent of the national budget is allocated to health, which translates to about $10 per person,” says Mukenge. “Liberia continues to count on donor aid for a large part of its health budget and services. Going forward, there is political will to improve the health sector, particularly in rural counties where the majority of poor women live, where there are proposed programs to train an adequate amount of health workers.”

Moving forward, outside funders and health organizations need to focus on strengthening local institutions over the long term instead of just focusing on short-term solutions. Says Mukenge, “As long as we have these issues—lack of infrastructure, lack of education, lack of access to healthcare, lack of gender equality, and the reality of foreign-imposed restrictions—then there is going to be another crisis further down the road. And once again it will be women who will suffer the most.”

Foreign Policy In Focus guest columnist Krista Walton Potter is the digital communications and editorial manager for the Global Fund for Women.