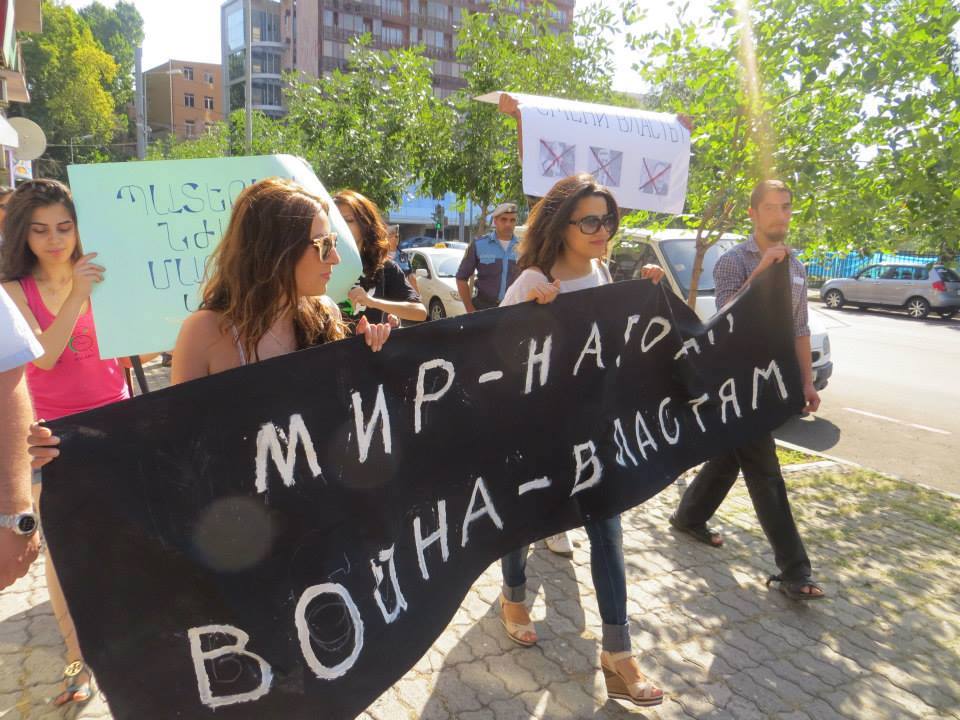 Women Call for an End to Violence in Nagorno-Karabakh

Women's peace groups are mobilizing to end the violence between Armenia and Azerbaijan over Nagorno-Karabakh.
By Anna Tenuta | April 19, 2016

Earlier this month, the so-called “frozen conflict” between Azerbaijan and Armenia over the disputed Nagorno-Karabakh region erupted. News reports suggest more than 30 people, including soldiers from both sides and civilians, were killed in four days of what the Armenian Defense Ministry called “the most serious escalation of fighting in the conflict since a 1994 truce.”

Although a ceasefire agreement has reportedly been reached, the prospect of this holding and maintaining peace is questionable at best. Women’s groups on the ground are calling for peace negotiations to resume in order to resolve the conflict once and for all. This conflict presents immediate threats to women, including the large portions of women refugees and internally displaced people in the region. Gender-based violence has increased, women’s access to critical services including health care and education has been limited, and years of work by women leaders to cultivate cross-border peace and collaboration have been rolled back.

The Nagorno-Karabakh region is located inside Azerbaijan, but is predominantly ethnic Armenian. Ethnic Armenians gained control of the region after a full-scale war from 1991 to 1994. Coming on the heels of the collapse of the Soviet Union—and the independence of both Azerbaijan and Armenia—the war resulted nearly 30,000 people were killed and around one million people were forced to flee. Today, Nagorno-Karabakh remains a de facto independent republic, though without the recognition of UN member countries.

The latest violence, which began with a military offensive in the pre-dawn hours of April 2, isthreatening to destabilize the region. It comes after more than 20 years of efforts to build peace in South Caucasus, a region that has experienced a number of “frozen conflicts” (Transnistria, Abkhazia, South Ossetia) since the collapse of the Soviet Union.

Reactions on the Ground

“This outbreak of violence was sudden, but not unexpected,” reports Shahla Ismayil, an Azerbaijani women’s rights activist and Global Fund for Women advisor. “With this in mind, it’s not a big surprise for me to see everyone in Azerbaijan with a military spirit and to witness levels of solidarity and mobilization among people that we haven’t seen in two decades.”

“Even the term ‘frozen conflict’ can be disputed as the shootings and killings of soldiers on both sides have been happening on a regular basis,” explains Armenian activist and Global Fund for Women advisor Anna Nikoghosyan.

For this same reason, women’s groups and peace activists hesitate to trust the ceasefire agreement that Azerbaijan and Armenia reported last week, calling instead for the two countries to resume peace negotiations.

“The international community, including funders, needs to pay renewed attention to Eastern Europe and the former Soviet states,” urges Mariam Gagoshashvili, Global Fund for Women’s Program Officer for Europe and Central Asia. “This region has increasingly become invisible, resulting in drastic declines in funding—especially for women’s rights work. The latest outbreak in violence means there is now an even greater need for critical funding for women’s groups to fill gaps in services and protection for women survivors of violence, among other work.”

Impact on Women and Girls

Many grassroots women’s groups fear that this conflict will impede progress on women’s rights. Some hard-won gains in this area—including changing policies and attitudes toward violence against women, and advancing rights and access to services and support for women refugees and internally displaced people—remain extremely fragile in the context of the ongoing conflict.

“We are deeply concerned about the increased military activities, the high level of incidents bringing about the death of people on the contact line,” said the Armenian Initiative of the Women in Black International Movement in a statement. “Our urgent call is addressed to the governments of both countries to stop violence and war.” Women in Black serves as an anti-militarist feminist platform of the Armenian women’s movement and uses such tools as regular peaceful vigils in front of government buildings and public events that promote and educate about women’s role in the process of peace-building and reconciliation.

The escalation in violence threatens to roll back two decades of work by women’s groups in Armenia and Azerbaijan to build peace and maintain dialogue and stability. For instance, long-time Global Fund for Women grantee partner Women’s Resource Center in Armenia operates an office in Nagorno-Karabakh—the first of its kind in the area—focused on supporting women living and working in the conflict area. Democracy Today, another Global Fund for Women grantee partner founded in 1995 in Armenia, was one of the forces behind the creation in 2011 of “Women of South Caucasus for Peace.” This critical regional initiative unites 13 women-led groups focused on peace-building from Armenia, Azerbaijan, and Georgia.

Women’s groups in Armenia and Azerbaijan played a key role in securing the adoption and ratification of UN Resolution 1325 around women, peace, and security in their countries and also collaborating across ethnicities and nationalities to build understanding. They also continue to work with women survivors of war-time sexual violence to provide psychological and legal support, trauma counseling, and skills training. They also advocate for changes in laws and policies in order to ensure that survivors can access justice.

“Women in the region have long been calling for peace in the Nagorno-Karabakh region,” says Mariam Gagoshashvili. “Now more than ever, we must listen and elevate their voices to the international community. We can no longer ignore this region and this unthinkable violence. Together, let’s make our voices heard.

11 international and regional women’s groups and women’s funds signed onto a joint statement calling for peace in Nagorno-Karbakh.

Anna Tenuta is the campaigns and communications manager at the Global Fund for Women.