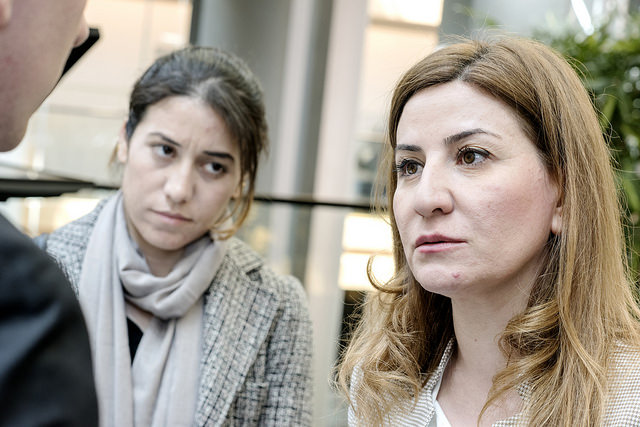 A line can be traced between the vote for the Iraq War and the enslavement of women, such as Yazidis pictured, by the Islamic State. (Photo: European Parliament / Flickr)

Yesterday Foreign Policy in Focus posted an article by Stephen Zunes on Hillary Clinton’s foreign policy. It’s of sufficient eloquence and importance to spur us to enter the echo chamber and emphasize some of its key points. Professor Zunes points out that “several things about Clinton’s record would make her an unusual standard bearer for” the cause of women. For instance:

Historically, it’s uncommon for women voters — who statistically tend to be more dovish on foreign policy matters than men — to support the most hawkish candidate in the Democratic primaries.

Feminists with an interest in foreign policy are divided on the prospects of a Hillary Clinton presidency. Many rightly applaud her advocacy for global feminist concerns [but do] these issues make up for her more problematic foreign policy positions?

More to the point, their effect on women:

Given that modern warfare results in far more civilian than military casualties, women are often its primary victims. Despite Clinton’s strong record of supporting women’s rights in the United States and in certain overseas programs, her militaristic disposition has arguably made life worse for millions of women outside of her constituency.

For example, the Iraq War, made possible in part through Clinton’s vote to authorize the invasion, has been a disaster for Iraqi women. The secular regime overthrown by U.S. forces was replaced by Islamist fundamentalists, and the ensuing sectarian civil war has produced horrific cases of sexual violence — including not least the enslavement of women by extremist groups like the Islamic State.

Professor Zunes’s piece becomes even more valuable as he adds a number of “bet you didn’t know that” examples of the knock-on effects of Hillary Clinton’s foreign policy on women (and, needless to say, children). We would just add how frightening it is to think that a line exists between her policies and the enslavement of, for instance, Yazidi women.