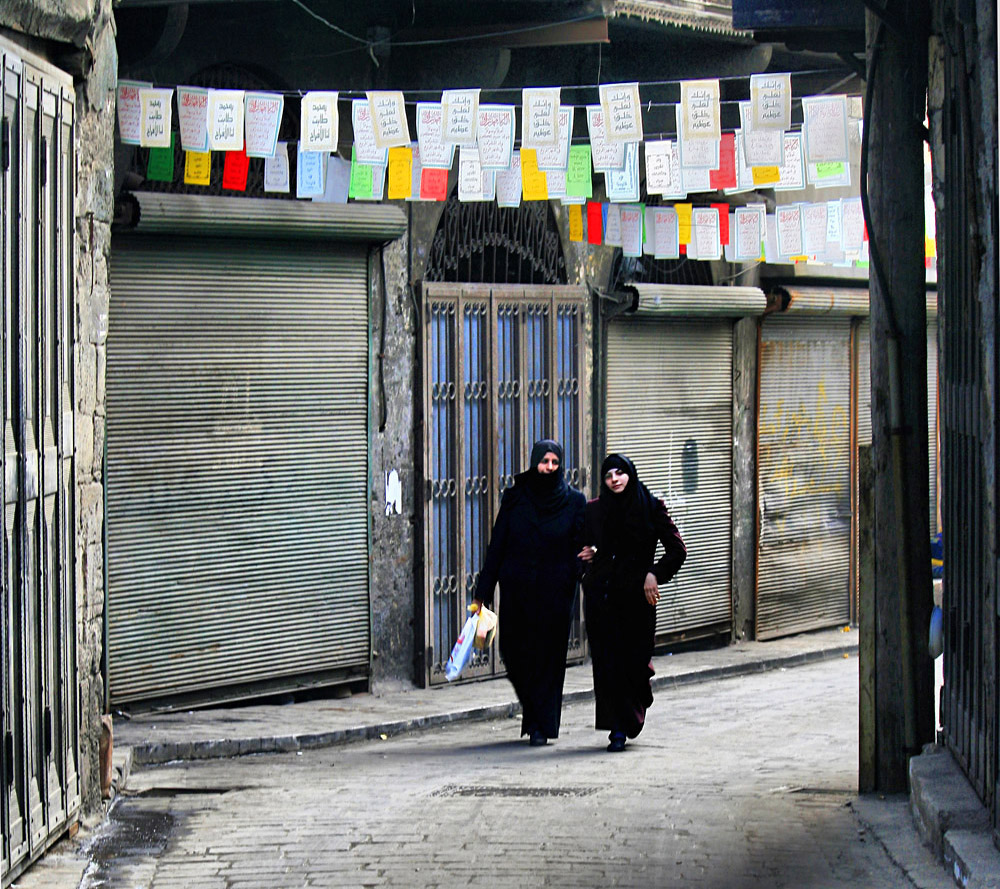 A pair of women walk together in Aleppo. (Photo: gezimania / Flickr)

Why Are Women Joining the Islamic State?

For some women in Iraq and Syria, the Islamic State offers something no one else has given them before: power.
By Elena Veatch | January 9, 2015

Among its many acts of terror, the Islamic State has a well-earned reputation for violence against women.

Labeled exceedingly radical even by al-Qaeda’s standards, the group’s reprehensible treatment of women has included sexual enslavement, forced marriages, and the execution of women who make unapproved contact with members of the opposite sex. These are just a few of the many vicious tactics of gender subordination highlighted by a recent United Nations report.

However, women are still joining the group — many by choice. The question, naturally, is why?

A Role for Women

We tend to associate acts of terror with men, presuming women to be inherently less violent. Over the years, al-Qaeda in particular has discouraged women from getting directly involved in its activities.

However, female insurgents have played integral roles in suicide bombings and other terrorist attacks in the Middle East. Palestinian women proved eager recruits in the Second Intifada, for example, just as others did in Lebanon on behalf of largely secular organizations resisting Israeli aggression in the 1980s.

For its part, the Islamic State has actively sought to entice women into joining its ranks — albeit, generally to play non-combat roles.

In February 2014, it created two female brigades — al-Khansaa and Umm al-Rayan — to enforce its stringent conceptions of Islamic morality. The group deems single women between the ages of 18 and 25 eligible to participate, providing a monthly salary of 25,000 Syrian pounds — the equivalent of about $140, as of this writing — as an incentive.

These women do not commit the conspicuous acts of terror that have made the Sunni extremist group infamous. Instead, they perform tasks such as searching people who pass through checkpoints, in part to expose men who have disguised themselves as women to avoid recruitment. They also serve as the Islamic State’s morality police, ensuring that female community members in seized areas dress appropriately in full niqab and refrain from going out in public without male accompaniment.

Accounts from women detained by al-Khansaa indicate that female brigade members do not merely obey orders from male leaders in the execution of their policing duties. Rather, to some extent, they seem to revel in their access to power. “They insulted me and yelled at me,” recalls Zainab, a young Syrian girl who was detained in March 2014. “Nobody talked to me or told me the reason for my detention. … The brigade has created fear among the women and girls of Raqqa.”

A Choice among Patriarchies

Although the Islamic State’s presence has undeniably exacerbated the oppression of women in Iraq and Syria, conditions were never ideal for women in these states in the first place (though by some measures they were better than in nearby countries).

In communities where honor killings continue to occur, female victims of rape are stigmatized, regardless of whether it’s members of the Islamic State committing the atrocities or someone else. Similarly, in places where women cannot decide for themselves how to dress or how to act, they remain subject to the authority of men, regardless of who’s in power.

Yet if the Islamic State seems even worse, why do women join?

Some contribute to the radical movement out of concern for their own safety. In northern and central Iraq, many women have been left to fend for themselves in the absence of male family members who have been roped into combat or killed. Joining the Islamic State could grant these women a sense of security. On the other hand, a genuine feeling of obligation among women to oppose the Iraqi government’s routine mistreatment of Sunnis could also be at play.

A more fascinating explanation, however, rests on the premise that women yearn to be entrusted with positions of authority in societies where traditional values already restrict female autonomy.

Syrian women participated in the 2011 Arab Spring uprisings, but since the onset of the civil war that followed, they’ve had to focus on survival rather than on instigating change. Just as Syrian President Bashar al-Assad has successfully included women in his own counter-insurgency tactics, perhaps the Islamic State has convinced some women that the perception of being in control — with the authority to subjugate members of their own community — is more desirable than the alternative: feeling the weight of their oppression each day.

The complicity of these women in enforcing strict conceptions of morality illuminates the unfairness of the pre-Islamic State lives they wished to escape. The Islamic State’s version of Islam surely oppresses women, but so too does the existing patriarchy in the societies the extremists have penetrated. “There is a process of female emancipation taking place in the jihadi movement,” explains Norwegian defense expert Thomas Hegghammer, “albeit a very limited (and morbid) one.”

Without the help of women at the local level, the Islamic State would not have been able to establish its presence in the Middle East so rapidly and effectively. But as women have discovered all over the world, helping to build a society scarcely prevents them from finding themselves at the margins of it.

Elena Veatch is a contributor to Foreign Policy In Focus and a student at Skidmore College.