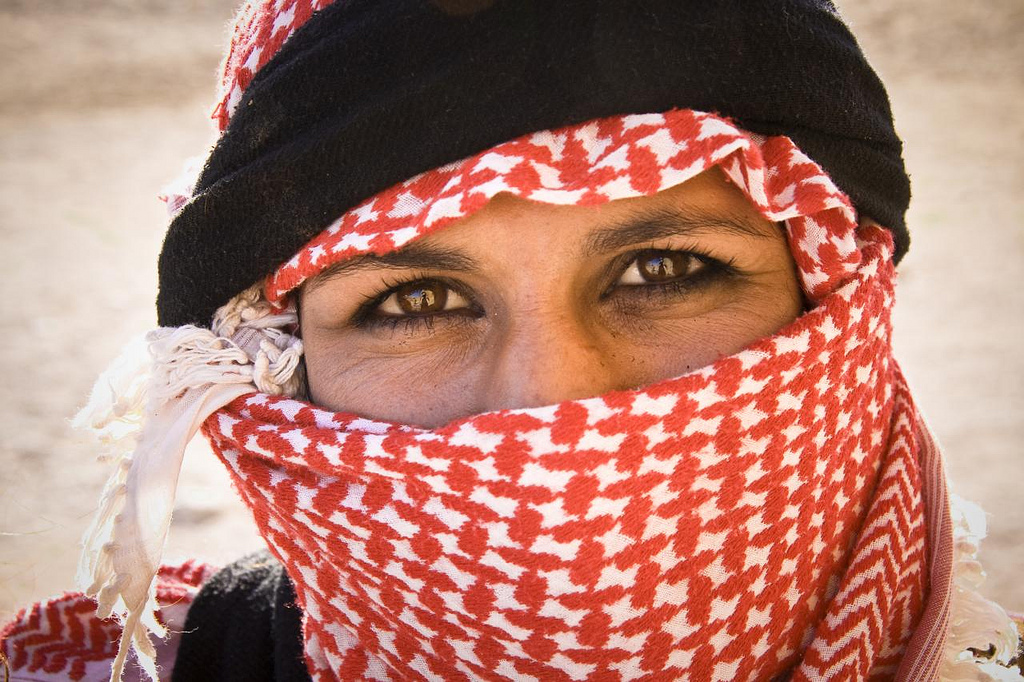 Ever since the initial uprisings against the government of Bashar al-Assad in spring 2011, women in Syria have organized and participated in peaceful demonstrations and provided vital humanitarian assistance to those in need. (Photo: Marc Veraart / Flickr)

Women and the War In Syria

Meet five women who are bearing the burden of conflict in Syria and persevering in spite of it.
By Hillary Margolis | July 21, 2014

From the initial uprisings against the government of Bashar al-Assad in spring 2011, women in Syria have organized and participated in peaceful demonstrations and provided vital humanitarian assistance to those in need. Like their male counterparts, Syrian women who take part in protests or provide aid are targets of abuse, harassment, detention, and even torture by government forces and some armed groups opposed to the government.

At the same time, general insecurity and discriminatory restrictions imposed by some armed groups opposed to the government have curtailed women’s dress and freedom of movement. Many women have become de facto household heads, both inside Syria and in refugee settings, when male family members have been killed, detained, forcibly disappeared, injured, disabled, or unable to find steady employment.

Recognizing women’s multiple and significant roles—and their experiences as both participants and victims—is critical to developing appropriate responses to women’s needs inside Syria and in refugee communities. It is also important to ensuring their ongoing and meaningful participation in determining Syria’s future. These women are not only bearing the burden of conflict but persevering in spite of it, often at great personal risk.

The women profiled below are identified by their first names or a pseudonym for their security. 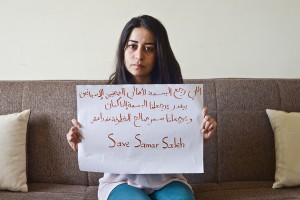 In early 2012, Maisa, a 30-year-old intensive care nurse from Damascus, joined a group of young doctors and medical students treating the wounded at makeshift field hospitals.

“I felt like my life was threatened all the time because the regime didn’t permit anyone to treat people from the opposition,” she said. Government forces searched for her repeatedly: “They would say, ‘We are keeping our eyes on you.’”

She started a small organization to support women’s rights and local political participation. She soon began interviewing activists on a pro-opposition satellite TV station. “I hid my face under a veil and used a different name so the regime wouldn’t know it was me,” she said.

But she said another activist revealed her identity under torture, and government security forces detained her at a Damascus cafe. They beat her during the night with a thick, green hose: “They slapped me on the face. They pulled me by my hair. They hit me on my feet, on my back, all over.”

They eventually took her to a police station, where men in police uniforms sexually harassed and tortured other female detainees. She saw one woman, handcuffed and naked, alone in a cell. “Once they brought her to our cell and made her beat the other women. Her body was defaced. It was all blue,” Maisa said. She was held there for four months.

“I never got to talk to anyone in my family. I never got a lawyer,” she said, and laughed at the suggestion that it would have been a possibility. Maisa said that at one detention facility, the security forces fed criminal detainees but not political ones. “To get food or make phone calls, some women would have sex with the policemen,” Maisa said.

After five months, Maisa was taken to counterterrorism court, where the judge upheld her detention. A month later she was freed in a prisoner swap. Maisa resumed her activism, but when government forces arrested fellow activists and started following her again, she made her way to Turkey.

Upon her release, she learned that members of ISIS had detained her sister, Samar, in Aleppo. “My mother is still searching for her daughter,” Maisa said. 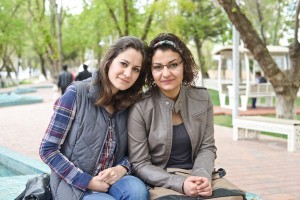 “For three months, I had a feeling that one of us was going to die,” said Maha, now 28, a former first grade teacher from Aleppo. She and her new husband, Mustafa, 30, were part of a young activist group promoting peaceful change and democracy.

In November 2012, they went to a Friday demonstration; Maha (left, with sister Nuha) said the participants were civilian activists and community members. Afterward, as she and her friends stood chatting in front of the mosque, government forces shelled the area.“I felt something falling above me and I started to run. I turned back and saw dust,” Maha said. “I looked for Mustafa. … I couldn’t find him.”

“I went to the hospital. I saw a child without legs. I saw every kind of injury.” Eventually doctors told her that Mustafa died during surgery, one of 13 who died that day.

Maha left Syria three weeks later, feeling shocked and hopeless, and has only returned once. Her brother Hussein, a well-known human rights blogger, was arrested with his colleagues Mazen Darwish and Hani Al-Zaytani at the Syria Center for Media and Freedom of Expression in February 2012 and is still in detention. Maha’s sister Nuha was detained for 23 days in August 2012 by pro-government militia members, who tried to use her as leverage for a prisoner exchange with an opposition group.

For now, Maha works from Turkey for the group she and her friends founded. She says such grassroots organizations formed the backbone of the uprisings in Syria, but violence and chaos has subsequently overshadowed their work and message. “On the news you only see blood and destruction,” she said. “You don’t see that behind it, there are civilian groups doing things peacefully.” 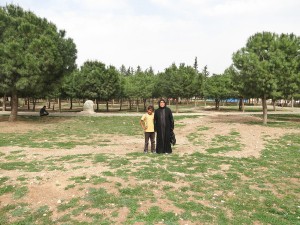 Amal with her surviving son.

“My only remaining child is my son,” said Amal, 44, pointing to the 10-year-old sitting by her side. Her four other children—ages 4, 7, 14, and 17—were at home in Aleppo a year ago when a barrel bomb hit. Amal, her husband, and one son were a kilometer away. “I said to my husband, ‘God help those who have been bombed,’” she said. “Then I found out it was my house and I’d lost my children.”

Until then, Amal’s family had felt relatively safe. Their neighborhood was under government control and, she said, no armed groups were near their home.

“We saw the helicopter. We saw when the barrel was thrown out,” she said. “At first I thought they were throwing food to the regime troops.”

Shortly after the bombing, Amal’s husband, a shopkeeper, suffered a heart attack and stroke that left him partially paralyzed. The family had moved to the opposition-controlled area of Aleppo and medical care was inaccessible. “I wash him, feed him, and take him to the bathroom,” Amal said.

They left for Turkey in March to seek physical therapy and healthcare for Amal’s husband. At the hospital in Kilis, Turkey, doctors said her husband’s heart problem would require specialized care. When she told them she had no money, “They said, ‘Then there is nothing we can do.’” The family was sleeping in an open park and relying on a restaurant that provides free meals to Syrian refugees. 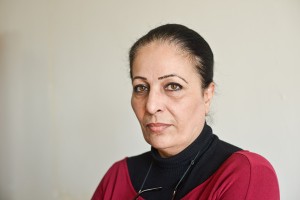 Nayla, 52, a teacher from Daraa, and a male friend were transporting a military defector to Damascus when government soldiers searched the car at a checkpoint. Discovering the defector, they seized Nayla’s identification and car keys and seized the men. “I had another car key with me so I drove away. They followed me and started to shoot,” Nayla said. “All the wheels went flat. I couldn’t control the car. They took me and started to beat me.”

The soldiers took all three to a detention facility in Damascus, where they blindfolded Nayla and tied her hands behind her back. They forced her to sit inside a car tire and placed a dowel through the gap between her knees and the tire to lock her in a position so that she could not defend herself from beatings. “When they turned me onto my face my feet were up in the air. They beat me with a green plastic stick.”

After two hours, the officers took Nayla to a solitary cell, approximately 1 by 1.5 meters. For two days, she was interrogated and denied food and water. “There were insects like you can’t imagine,” she said. “I started to scratch myself until my skin bled.”

On the third day, officers brought Nayla to a cell with other women and girls. Through a small window in the door, Nayla saw men who she said appeared to have been tortured. She saw a young man crawling on the floor, his feet so blue and swollen from beatings that he could not walk. “You can’t imagine—day and night, the screaming, the crying, the beating,” she said.

After nearly seven months in detention, Nayla went before a military court on charges of assisting activists, anti-government fighters, and foreign governments. The judge found her innocent but referred her to a civilian court, where a judge released her. She said of her imprisonment and subsequent release: “You feel you will never be free again—that you will never see your family, never go to [a proper] toilet.” 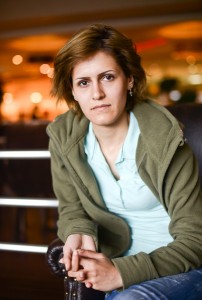 “When the revolution started, it was what we had been waiting for,” said Berivan, 24. An English literature student at Damascus University and a member of the Kurdish minority, which has faced longtime government persecution, she was eager for change. She joined peaceful protests.

In November 2012, as the conflict grew, she moved to the Yarmouk refugee camp in south Damascus, which was soon under siege by government forces. Berivan and her friends opened a free pharmacy using medicines left behind by pharmacists and abandoned clinics. They also trained civilians in emergency medical care.

But after nearly a year, in September 2013, extremist armed opposition groups expanded their presence in the camp. Members of the group Liwa’ al-Islam detained Berivan, accusing her of providing medical treatment to men, not wearing a headscarf, and being a government spy. They called her kafir, a derogatory term used by Muslims for a non-believer. After several days, the group admitted they had no evidence against Berivan but continued to detain her. They freed her after 10 days, most of which she spent on a hunger strike.

Wearing a headscarf as a precaution, she re-opened the pharmacy in Yarmouk. But then fighters of the Islamic State of Iraq and Syria (ISIS) forced her to close it, threatening her because she wasn’t wearing a full-length abaya. “If we ever see you in this area, we will hang you,” they told her.

Wanted by both the armed Islamist groups and by government forces for providing humanitarian assistance in the camp, she fled to Turkey in February.

For Berivan, being in Yarmouk was a choice. “The problem is there are lots of people still there and it is not their decision,” she said of those trapped in besieged areas. She emphasized the strength of women in the community. “They are strong, and they are fighting. They are suffering. They don’t want to leave.”

For the full report, We Are Still Here: Women on the Front Lines of Syria’s Conflict, go to:

Hillary Margolis is a researcher on women’s rights in Syria in the Women’s Rights Division of Human Rights Watch. She is a contributor to Foreign Policy In Focus.