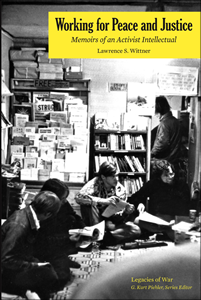 Working for Peace and Justice

This excerpt from scholar and activist Lawrence Wittner's autobiography recounts a visit to the Soviet Union and an unusual historical find.
By Lawrence S. Wittner | July 16, 2012

Beginning in the early 1990s, my prominence as an historian, coupled with my research on the history of the world nuclear disarmament movement, led to my playing a growing international role.

This new trend in my life was exemplified by a research project that emerged in connection with the work of Soviet scholars. With the advent of Mikhail Gorbachev’s liberalizing leadership in the Soviet Union, researchers at the Institute for General History of the Soviet Academy of Sciences seized the opportunity to contact CPRH [the Conference on Peace Research in History] and inquire if we would like to work with them on producing an anthology of major writings on world peace. As this book, tentatively entitled Peace/Mir, would be the first Soviet work to break out of the straitjacket of Leninist orthodoxy and provide Soviet citizens with genuinely peace-oriented essays, we found the idea very appealing. Determined to proceed with the project, Charles Chatfield—after numerous attempts—managed to secure a grant from the United States Institute of Peace that would fund our travel to Moscow for a lengthy conference with the Soviet participants. Although, previously, I had avoided traveling to the Soviet Union—both because I disliked the regime and because I didn’t want to give any ammunition to my critics—this seemed like too good an opportunity to miss. Consequently, I decided to join other prominent CPRH scholars—Charles; Sandi Cooper, a specialist on European peace movements; Carole Fink, a historian of European diplomacy; and David Patterson, a historian of the U.S. peace movement and the deputy historian at the State Department—on our very own mission to Moscow. We would be accompanied by my wife Dorothy and by David’s wife and son.

Thus, we ended up living and working in Moscow from June 22 to July 2, 1990. Arriving at Sheremetyevo airport, Dorothy and I almost didn’t make it past the scowling armed guard at the entry booth, apparently because we arrived some hours earlier than expected. But a phone call to the Institute put things right. Along with the rest of our delegation, we were soon ensconced in the Academy Hotel—a dingy, decrepit place, with sour-faced women grudgingly doling out limited supplies of toilet paper on each floor and serving what passed for food in a very tiny cafeteria. For most of our stay, there was no hot water in the rooms. When David complained to the ubiquitous woman in charge of his floor that his bathroom lacked a toilet seat, she just shrugged. In addition, with his suitcase lost by Aeroflot, poor David . . . had no change of clothes for the entire period, and fell back upon wearing his son’s Snoopy T-shirt and using my razor to shave. Needless to say, it was virtually impossible to buy any replacements for the missing items or almost anything else. One supermarket we entered had nothing but powdered milk, located on a shelf in the corner. But we found lots and lots of Lenin pins that could be purchased, and very cheaply too. So this, I thought to myself, is the mighty Soviet Union—the great hope of all progressive humanity.

Although I arrived with the expectation that we would be pressed to accept the official Soviet view of things, I could not have been more wrong. For the most part, our hosts and the Soviet graduate students who guided us around Moscow were sharply critical of Soviet life. Treated to several days of complaints about the Soviet Union, Dorothy finally asked one of the women students what she liked about it. The young woman shrugged and replied: “Nothing.” Not even Gorbachev’s glasnost and perestroika inspired much enthusiasm. Gorbachev, one of them told us, was “just another Communist.” Faced with this attitude and with a rather mindless glorification of American capitalism, our U.S. delegation eventually found itself striving for some balance, pointing out that things were changing for the better in the Soviet Union and that robber baron capitalism wouldn’t serve the Soviet people well either.

Actually, we got along very nicely with our Soviet hosts. Meeting in a conference room at the Institute (where I sat uncomfortably under a picture of Lenin), we agreed upon a broad range of essays for Peace/Mir. In the evenings, we had dinner at their rather modest apartments, participated in large banquets, or were escorted to cultural events. On one afternoon, we were supposed to visit Tolstoy’s estate, at Yasnaya Polyana. Instead, though, we were dragged off to visit a local Russian Orthodox church complex, much to my dismay. Not long after that, to wrap things up, a small Soviet delegation—headed by the Institute’s Ruzanna Ilukhina—met with us in the United States, at Rutgers University. Here we renewed our friendships, put the finishing touches on Peace/Mir, and discussed plans for its publication. However, by the early 1990s, when it was finally published in the United States and Russia, the Soviet Union had ceased to exist. As a result, the anthology was no longer extraordinary in either country. On the other hand, we did have an impact on our Russian counterparts—or so Ruzanna told us. In fact, she said, she took inspiration from us when—together with thousands of others resisting the attempted coup by the Communist Old Guard in 1991—she stood defiantly in front of Moscow’s government buildings bearing a sign that read: “Soldiers, Don’t Shoot Your Mothers!”

Other projects, too, began taking on international dimensions. In July 1990, on my way home from the meeting with our new friends in Moscow, I stopped off in London to do research for The Struggle Against the Bomb. Sitting in the Public Record Office and examining the newly-opened prime minister’s records, I was startled to discover a folder of documents showing that in the late 1950s cabinet-level government officials had launched a conspiracy to undermine Britain’s Campaign for Nuclear Disarmament (CND). Moreover, it seemed likely that documents indicating all kinds of improper and illegal government actions were stored in the following folders, which—in sharp contrast to the government’s standard thirty-year declassification practice—were marked “Closed for the next 100 years.” Although the research room was cold, sweat began pouring down my face. Should I bring those documents lying before me up to the front desk to be photocopied? I had better not, I concluded, or they might be locked away once more where no outsider would ever see them. So I spent the rest of the day copying them by hand and then spiriting away the copies to my hotel room.

Fortuitously, the next day I was scheduled to interview CND’s current chair, Monsignor Bruce Kent. Therefore, at the end of the interview, I mentioned the folder of documents illustrating the British government conspiracy. With his eyes brightening, Bruce suggested that I write up something on the issue and, then, he would have it placed in the Guardian, Britain’s best newspaper. Eager to combine historical and political issues—and particularly when the combination would expose government misconduct—I was elated. Thus, immediately after my return to the United States, I dashed off an article on the conspiracy and mailed it to him. Unfortunately, though, Bruce couldn’t deliver on the Guardian. Instead, he placed the article in New Blackfriars—a Dominican journal that, from the standpoint of publicizing the conspiracy, was considerably less satisfactory. I did have the consolation, though, of receiving a very nice letter on the article from E.P. Thompson—a very prominent British historian and the leading figure in the European Nuclear Disarmament campaign—who praised it lavishly. Also, the article was reprinted in Britain’s Catholic Herald and, more than a decade later, I did a follow-up story on the affair (“A Hot Day at the PRO”) for Peace and Change.

Lawrence S. WittnerLawrence Wittner is a former professor of history at the State University of New York/Albany and a contributor to Foreign Policy in Focus. His latest book is Working for Peace and Justice: Memoirs of an Activist Intellectual (Knoxville: University of Tennessee Press, 2012), from which this piece was excerpted.