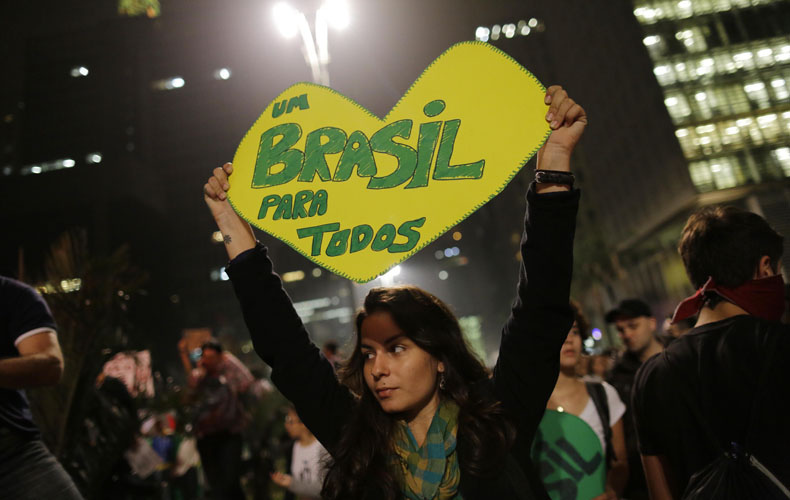 What the World Cup Can Teach Progressives About Corruption

Fighting corruption is a proven means to reduce inequality. But the issue has often been co-opted by elites looking to do just the opposite.
By Walden Bello | July 14, 2014 Progressives need to learn how to fight corruption without ceding the issue to anti-democratic elites. (Photo: Sebástian Freire / Flickr)

Brazil’s crushing World Cup loss to Germany’s world champion team wasn’t just bad news for Brazilian football fans. It’s also likely to reignite the anger that many Brazilians felt towards the government of President Dilma Rousseff for hosting such a spectacular event when it could hardly afford decent public transport and social services for its citizens.

Corruption is also part of the explosive narrative. In the most expensive World Cup ever, millions of Brazilian taxpayer dollars went into corruption-plagued construction projects, including a new bridge in Belo Horizonte—site of the humiliating dismantling of Brazil by Germany—which has already collapsed.

With Brazil stuck with a $14-billion price tag and FIFA—probably the most corrupt international sports body in the world—clearing a $2-billion, tax-free profit, it is hard to see how Rousseff’s center-left government can survive the coming blowback.

In many ways, the episode encapsulates the complex relationship between the politics of progressivism and corruption in the developing world.

Apart from passionate support for their national sports teams, hatred of government corruption and “crony capitalism” is one of the few issues that unite all social groups in developing countries.

Corruption is often the main issue of opposition parties seeking to get into elected office in democracies. And along with anger at dictatorial abuse, disgust with corruption has been one of the driving forces in the toppling of authoritarian regimes, which was particularly evident during the Arab Spring.

An alliance between civil society and reformist groups in government can be a powerful force in curbing corruption.

For instance, during the last few months in the Philippines, it played a central role in the historic abolition of the so-called “pork barrel,” or lump-sum government funds given by the executive to members of the legislative branch, which has long been a source of presidential control over members of Congress. The reformist thrust of the anti-pork barrel campaign has not yet been spent, resulting recently in a Supreme Court ruling against the executive’s abuse of budgetary powers and the high-profile prosecution of several senators for embezzling funds intended for public projects.

Probably even more exemplary than the Philippines in fighting corruption is Indonesia, where prosecutions of corrupt officials by the Corruption Eradication Commission have achieved a 100-percent conviction rate, sending even high-profile politicians to jail for their misdeeds. As one account notes, the commission has enjoyed widespread popular support on account of its “ability to prosecute those at the top of the food chain,” which has insulated it against reprisals from resentful elites.

Reducing corruption can undoubtedly contribute to reducing inequality, both directly and indirectly. Nevertheless, campaigning against corruption is not usually high on the agenda of progressive groups.

For instance, for the Brazilian Workers’ Party that President Lula da Silva led to power in 2002, corruption was an issue, but it was subordinate to changing Brazil’s highly unequal social structure. But once Lula came to power, dealing with corruption became a central concern, especially when people close to the popular progressive president were discovered bribing parliamentarians to get support for government-initiated legislation.

For many progressives, the corruption issue is a double-edged sword. Multilateral agencies like the World Bank and the Asian Development Bank have promoted the view that “good governance” is the central problem in development, by which they often mean that government intervention in the economy creates opportunities for corruption. This view is particularly popular among the middle classes, whose discourse dominates public discussion.

In other words, the anti-corruption cause is often tied to an ideological neoliberal agenda.

Elite politicians frequently jump on the anti-corruption bandwagon because it allows them to paint themselves as saints and their foes as devils even as they marginalize the urgency for structural changes like agrarian reform and income redistribution. In the Philippines, for instance, the Aquino government has prided itself on its “Straight Path” anti-corruption program. But despite its best efforts, its progressive coalition partner, the Citizens’ Action Party, has not been able to make advancing agrarian reform or rolling back neoliberal policies priorities for the administration.

From Anti-Corruption to Anti-Democracy

For progressives, the greatest risk of the anti-corruption discourse is the way it can be manipulated by elites to derail efforts at progressive transformation.

The most recent case of this is in Thailand, where conservative royalist elites were able to mobilize the Bangkok middle class on an anti-corruption platform to provoke a military coup, which felled the elected populist government formerly headed by Yingluck Shinawatra. An earlier putsch in 2006 overthrew Yingluck’s brother Thaksin, who is enormously popular with the rural lower classes.

Charges of corruption against Thaksin were not fabricated—there is no doubt that he bought many of his political alliances with elite politicians. But the main reason he was able to cultivate such massive popularity among the rural and urban poor of Thailand was because of his transformative policies. He freed the country of the enormously harmful policy straitjacket imposed by the International Monetary Fund following the Asian financial crisis of 1997 and promoted programs that directly addressed the needs of marginalized Thais.

The most important of these were a universal healthcare program that gave people medical treatment for all diseases for the equivalent of 35 baht (slightly over a dollar at today’s exchange rate), the so-called “One Million Baht per Village Fund” that went to localities to invest in productive activities of their choice, and a moratorium on the debt of farmers. The Thai political and intellectual elites, resorting to anti-corruption discourse, defined these programs for the middle class mind as forms of vote buying.

The real issue, however, was the empowerment of the poor that Thaksin’s programs brought about, which led to the creation of a massive electoral majority which, in the eyes of the elite and the middle class, threatened a fundamental and permanent redistribution of political and economic power. With this perspective, it is not surprising that the struggle against corruption was turned into a struggle against democracy.

The slogan “reform before elections” that mobilized academics, professionals, white-collar workers, and small businesspeople was essentially a call to devise constitutional arrangements that would keep electoral majorities based on the rural and urban poor from forming governments. The military junta is heeding this call, imperiling the cornerstone of democracy: majority rule.

Perhaps the best illustration of the transmogrification of anti-corruption discourse was this assertion from a supposedly liberal Thai academic, who told me: “For me democracy is not the best regime. I’m in this sense an elitist. If there are people who are more capable, why not give them more weight? Why should they not come ahead of everybody else? You may call me a Nietzschean.”

So how should progressives relate to corruption?

First of all they should recognize that corruption is a universal concern, and its elimination or mitigation can have a positive impact on reducing inequality. This is especially true in the case of the extravagant infrastructure expenditures and massive evictions of poor Brazilians that paved the way for the World Cup.

Yet they should be careful not to play into the hands of neoliberal elites looking to reverse the redistribution of power and wealth away from the poor and marginalized classes. The movement against corruption can be channeled into a mobilization of the middle class to oust governments that promote popular political and economic empowerment, as in Thailand.

So even as they embrace fighting corruption as part of a broader movement for social transformation, progressives would be well advised not to get trapped into using anti-corruption rhetoric for anti-democratic ends.