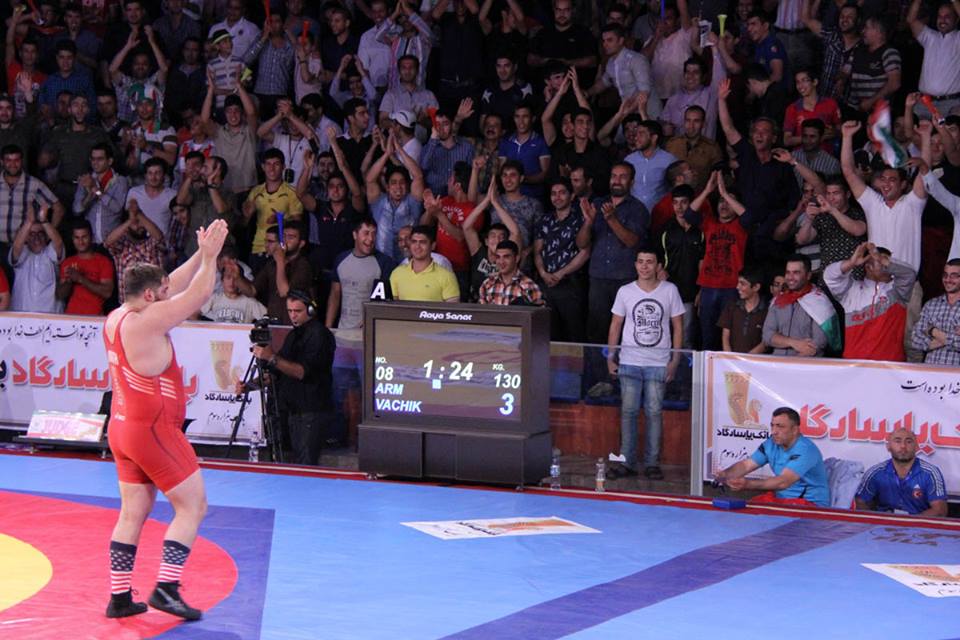 Wrestling is the new ping pong when it comes to U.S.-Iranian relations.
By John Feffer | February 4, 2016

In Iran, wrestling commands the same level of public interest as football in the United States. This is no passing fad. Wrestling is intimately entwined with the history and culture of the country, going back to the legendary matches that Persian kings conducted with their rivals.

It’s also a matter of national pride. At the Olympics, Iran wins more medals in wrestling than in any other category. Since 1948, the country has won 35 medals in the sport. When Olympic officials decided in 2013 to drop wrestling from the 2020 games, Iran spearheaded an effort to reinstate the sport. In a mere seven months, and with the help of the United States and Russia, Iran successfully persuaded the Olympic Committee to change its mind.

When the Obama administration decided to explore ways of improving people-to-people relations with Iran, wrestling was a natural choice. Because Iranians excel at the sport, playing to their strength was a way of showing respect for Persian culture and history, much as ping pong was the natural choice for U.S.-Chinese détente in the 1970s.

More importantly, wrestling is a way to reach out beyond Iranian liberals. “Wrestling appeals to conservative elements,” Bahman Baktiari, the executive director of the International Foundation for Civil Society explained this week at an Atlantic Council event on public diplomacy with Iran. “Iranians start matches with prayers. Most of the logos in the arena are from the Koran. We are connecting to an important segment of Iranian civil society that we were not reaching before.”

A New Beginning with the Muslim World

The initiative in Washington to engage in “wrestling diplomacy” began in 2009, shortly after Barack Obama entered the Oval Office. When the president pushed the reset button with the Islamic world in his June 4 address at Cairo University, the Iran desk at the State Department seized the opportunity.

“We did something rare in DC: we engaged in a moment of introspection. Was our policy working? Were we being heard inside Iran in the way that we wanted to?” explained Gregg Sullivan, senior adviser for public diplomacy at the Office of Iranian Affairs at the State Department. “We felt that we were far too heavily weighted on the punitive side. We were not giving a sufficient message of hope to those willing to work collaboratively with us. We began to restore our public diplomacy program in the Persian language and with exchanges in arts, culture, and sports.”

This exchange component prompted the State Department to reach out to U.S. civil society organizations interested in working with their counterparts in Iran. It also meant clearing away obstacles to that collaboration by working with Homeland Security to facilitate the issuing of visas.

One of the first fruits of this effort was “Rumble on the Rails,” a set of matches between the United States, Iran, and Russia that took place in the main concourse of Grand Central Station in New York in 2013. The event was designed to cement cooperation among the three countries in an effort to get wrestling reinstated as an Olympic sport. The timing was also useful in that it took place one month before the presidential elections in Iran, which resulted in a victory for reformer Hassan Rouhani.

The real breakthrough came a year later when the World Cup of Greco-Roman wrestling took place in Tehran. The State Department worked with USA Wrestling to make sure that a U.S. team competed. That participation broke a number of different barriers in US-Iranian relations.

Christina Kelley was the team leader of the US Greco-Roman wrestling team. “When we submitted my name, the Iranians said, ‘Isn’t this a female?’” Kelley recalled. “And we said, ‘Yes it is.’ And they said, ‘There’s a strong chance that you won’t be allowed to go and even if you are, you won’t be allowed into the arenas. And I said, ‘I still want to go even if I have to stand outside the arena.’”

Iran does not field any women’s wrestling teams. And women are only allowed into the wrestling matches under special circumstances. In preparation for her trip, Kelley bought conservative black hijab and prepared to remain quietly in the background.

But then the head of USA Wrestling asked her to carry the US team banner in the opening ceremony of the World Cup. After some back-and-forth with skeptical Iranian authorities, she was given the go-ahead. Initially apprehensive, Kelley was surprised by the genuine enthusiasm of her Iranian hosts and the audiences at the wrestling matches. Her dress, more conservative than what most Iranian women wear, helped to allay the concerns of the Iranian authorities. News outlets flooded her with interview requests, and Iranian officials eventually persuaded her to stay another six days to tour the country. Later, an Iranian wrestling official confided to her that he was pushing for the creation of the country’s first women’s wrestling team.

At the World Cup itself, the American team fared rather poorly, coming in ninth out of 10 teams. But the final results don’t reflect the progress made in U.S.-Iranian relations. After one of the U.S. team’s only victories, U.S. heavyweight wrestler Robert Smith exchanged shirts with the Iranian drummer at the event and then walked around the arena together. “The crowd went crazy,” Baktiari remembered. “I hadn’t seen such an open expression of US-Iran relations in 36 years.”

All the U.S. visitors were surprised by how welcoming Iranians were. Baktiari spoke of a visit to an Iranian bazaar where one of the rug merchants insisted that each American wrestler take home a free rug.

“Wrestling diplomacy” is not without its critics, either in the United States or in Iran. “There are people inside Iran who are opposed to this détente,” Sullivan explained. “Some see it as an existential threat shaped by their experience of the 1979 revolution, drawing a firm line against what they see as the unjust encroachment of American influence.”

“But we’ve also seen so much good will,” he continued. In the educational field, for instance, 12,000 Iranians are currently studying in the United States, a number that has steadily climbed since 2003. Only 10 other countries in the world send more students here. The numbers are particularly remarkable because, without an American diplomatic presence in the country, Iranian students have to travel to places like Dubai or Ankara to meet with a US consular officer to make their application.

The wrestling initiatives have also paved the way for other sports exchanges. Later in 2014, the Iranian national men’s volleyball team visited Los Angeles to play four exhibition games against the U.S. team. The U.S. team made a reciprocal visit last year.

When the Iranian team arrived at LAX in 2014, the State Department’s Gregg Sullivan was there to give out pins of the U.S. and Iranian flags side by side. Iranian news agencies picked up the story, and he estimates that 60 million people inside Iran saw the arrival ceremony.

Sullivan had a chance to have a number of conversations with the Iranian players during that trip. Near the end of the tour, one of players pulled him aside. “He told me that at school, he has to get up in front of class to give an oath,” Sullivan recounted. “And I said, yes, we have something similar – the Pledge of Allegiance. And he said, ‘We say all the great things about being an Iranian. And then we end up saying Death to America. But I think we shouldn’t say that any more.’”

Sullivan paused. “I’ve been at the State Department for 24 years. And that story still chokes me up.”