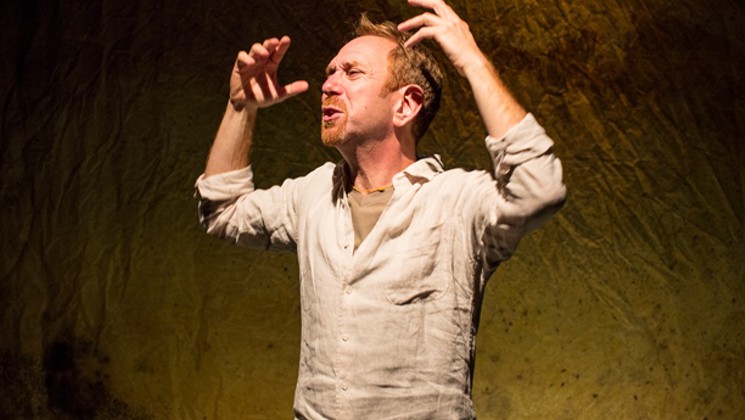 A powerful new solo show on the Israel-Palestine conflict presents the sounds of one man wrestling.
By John Feffer | January 19, 2016

Solo shows are about journeys. The performer tells the story of how he or she navigated through an experience of life-altering importance.

At the beginning of Wrestling Jerusalem, the new solo show that kicks off Mosaic Theater Company’s latest Voices from a Changing Middle East Festival in Washington, DC, playwright and performer Aaron Davidman makes it clear that his journey of personal discovery runs right through a minefield. The landscape he is traversing, shaped by the conflict between Israelis and Palestinians, is full of the exploded and unexploded ordnance of history.

Davidman, on a bare stage with a curtain wall as backdrop, begins by throwing out a series of dates at the audience, all of which represent possible starting points for the conflict. Was it 1948 and the Nakba, the expulsion of Palestinians from their ancestral lands? Or was it 1948 and the creation of Israel and the return of Jews to their ancestral lands? Or was it later, the wars of 1967 or 1973? Or was it earlier and the tensions created by the British, who set up their mandate in Palestine in the 1920s? More dates swirl around the stage in a veritable typhoon.

And then Davidman pauses. “It’s complicated,” he sighs.

He then proceeds over the course of 85 minutes to introduce the audience to 17 different characters who represent all sides of the conflict: a liberal rabbi, a Muslim proselytizer, a member of the Israeli Defense Forces, a radical American Jew, a Palestinian farmer, and so on. Arguments erupt, sides are taken, misunderstandings proliferate. It’s a dazzling display of characterization – of people and of a conflict.

The complex mosaic of voices and the non-stop barrage of contrasting viewpoints all seem to illustrate the playwright’s thesis. But is the situation really so complicated?

“I felt uncomfortable with the idea that the situation is complicated,” said Zeina Azzam, executive director of the Jerusalem Fund, in the post-performance conversation sponsored by Epicenter, a new initiative at the Institute for Policy Studies that explores the intersection of art and politics. “The solution is not complicated. It’s simple. There is an occupier, and there are the occupied. Israel must stop occupying Palestinians’ land, share power, compromise. The solution is not complicated; the implementation of it is.” 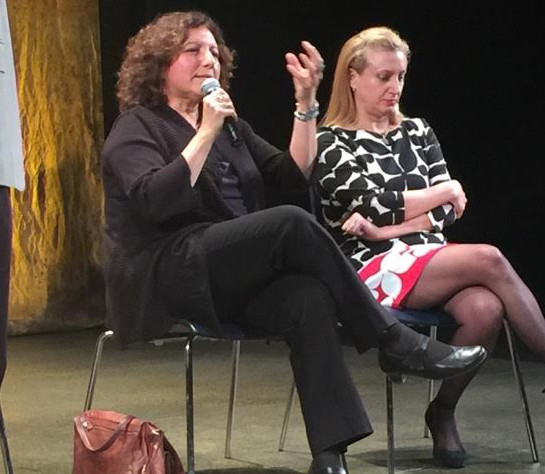 At one point in the play, one of the characters makes a similarly straightforward statement. “This is not my Judaism,” a liberal rabbi declares. This was the point that resonated the most with the other post-performance panelist, Lara Friedman, the director for policy and government relations at Americans for Peace Now. “This isn’t my Judaism either,” she said, “the Judaism of the occupier.” She expressed her hope that many people would see the play, especially American Jews, and come away with a better understanding of, yes, the complexities of the conflict, but also “the humanity of both sides, and the need to end the occupation.”

During the course of his play, Davidman wrestles with his immersion in Jewish culture, history, and religion on the one hand and his commitment to the ideals of social justice on the other. Likewise during the play, I was engaged in my own wrestling match: between my sympathy for the insights of Azzam and Friedman and the requirements of the storytelling genre.

Storytelling, after all, is all about complication. Think of the most simple-minded thriller. If the good guys nab the bad guys immediately after they commit their dastardly deed, the game’s up and the story’s over. For a story to develop over time and engage an audience’s interest, complications must ensue.

Moral ambiguity abounds in Wrestling Jerusalem. The Israeli Defense Forces veteran confesses that he, too, considered refusing to serve because of a profound discomfort with operations against civilians. A Palestinian woman, who had received a degree from Georgetown University, proclaims her commitment to non-violence but acknowledges that the frustrations of those living under occupation make their resort to violence understandable.

But ultimately, the Jewish characters in Wrestling Jerusalem appear to be struggling with the more profound moral quandaries. In the play, Jews argue with each other, but they don’t argue with Palestinians. Nor do Palestinians argue with Palestinians. The wrestling match is within the soul of the liberal Jew over what it means to be Jewish in a post-Holocaust world. This, of course, is Davidman’s struggle, and it is also his journey. So the complications that ensue in the play do not really involve real Palestinians, another point made by Zeina Azzam. They involve Palestinians more as a body of people, a chorus rather than a set of fully realized protagonists.

From the standpoint of pure storytelling, Wrestling Jerusalem would not necessarily have benefitted from the inclusion of more complex Palestinian characters. In a sense, such stories would have distracted from Davidman’s central struggle, which takes place inside himself, and he is not a Palestinian. As a larger drama, however, the play feels somewhat one-sided: the sound of one man wrestling.

Not a Morality Play

Which leaves the other challenge: has Davidman unnecessarily complicated an essentially simple story of one group subjugating another? The play resists delivering any single message in favor of providing a multiplicity of voices. It is not a morality play. Indeed, Davidman incorporates opinions that differ from his own, including the perspectives of those who resist transferring state authority to Palestinians (because they oppose Hamas in Gaza or support Israeli settlements in the West Bank or some other reason).

Sometimes these voices even make questionable assertions. One of the Israeli characters, for instance, argues that Hamas used “human shields” during the war in Gaza in 2008-9. But a UN fact-finding mission found no such evidence for this Israeli government claim, something that Davidman fails to mention. At the same time, it’s likely that others in the audience would take issue, on a factual basis, with statements from other characters they would accuse of an anti-Israeli bias.

It’s not that Davidman believes that everything is complicated. For instance, he includes a telling anecdote of being in Hebron, a city in the Occupied Territories. He is waiting for a Palestinian friend. There is a crowd in the square where he is waiting. The crowd is listening to a man with a microphone speaking Arabic. His words seem harsh. Davidman listens for the word yahudi, the Arabic word for Jew, to see if perhaps the speaker is making political pronouncements and riling up the crowd. He is getting worried.

Finally his friend shows up. Davidman is eager to leave. Why do you seem nervous, his Palestinian friend wants to know? Davidman asks him about the rally going on in the square. “Oh, that?” his friend says. “That’s an auction.”

Here the reality was quite simple, but it required an ability to listen and comprehend to reveal the truth. It’s our ignorance, our fear, and our willingness to think the worst of people, Davidman suggests, that provide overlays of misinformation. I would never argue that if, by some miracle, Israelis and Palestinians were suddenly granted complete understanding of each other’s language and culture, they would be able to get along in that sliver of land along the Mediterranean. The dispute is largely about power – who wields it, who doesn’t – not about a linguistic or cultural misunderstanding.

Wrestling Jerusalem doesn’t gloss over the fundamental facts of power. But by putting Davidman’s own story at the heart of the narrative, it necessarily privileges the moral struggle within modern Judaism over the power struggle between Israelis and Palestinians. The complications he delves into are not the stuff of an advocacy campaign or a policy prescription. As such, Wrestling Jerusalem succeeds marvelously in representing one man’s journey and one people’s struggle. It is less successful in conveying the complexities of Palestinian life or the simple truths whose acknowledgment will one day force the transformation of an unjust status quo.

John Feffer is the director of Epicenter and of Foreign Policy In Focus.