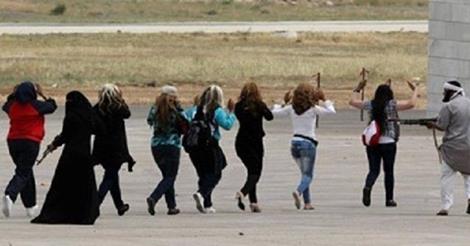 Choose your poison: Have the baby of an Islamic State fighter or be continually raped.
By Russ Wellen | March 15, 2016

Yazidi women in Iraq who were captured by the Islamic State in 2014 and since used as sex slaves have been experiencing few pregnancies. Writes Rukmini Callimachi in the New York Times:

… of more than 700 rape victims from the Yazidi ethnic group who have sought treatment so far at a United Nations-backed clinic in northern Iraq, just 5 percent became pregnant during their enslavement.

Despite their medieval attitudes about sex, birth control, and abortion, the fighters who “own” and sell them have been giving them birth control pills. Why?

To keep the sex trade running, the fighters have aggressively pushed birth control on their victims so they can continue the abuse unabated while the women are passed among them.

In other words, to sell women they can’t be pregnant. Lest you think it’s due to some misplaced sense of honor, Callimachi dispels us of that notion.  “The purpose of this is to guarantee there is no confusion over a child’s paternity.” Talk about debasing the concept of thank goodness for small favors: In return for being spared having the babies of Islamic State fighters, the women are raped on an ongoing basis.

The fighters — let’s just call them what they are: rapists — acquainted themselves with gynecology. A teenage Yazidi girl interviewed by Callimachi was sold a total of seven times.

When prospective buyers came to inquire about her, she overheard them asking for assurances that she was not pregnant, and her owner provided the box of birth control as proof. That was not enough for the third man who bought her, she said. He quizzed her on the date of her last menstrual cycle and, unnerved by what he perceived as a delay, gave her a version of the so-called morning-after pill, causing her to start bleeding.

Even then, he seemed unsatisfied.

Finally he came into her room, closed the door and ordered her to lower her pants. The teenager feared she was about to be raped. Instead he pulled out a syringe and gave her a shot on her upper thigh. It was a 150-milligram dose of Depo-Provera, an injectable contraceptive, a box of which she showed to a reporter.

Some responsibility for the rape of the Yazidi women must be laid at the feet of the United States, which destabilized (to put it mildly) the region and laid the groundwork for the formation of the Islamic State. But it’s also a testament to how easily religious doctrine can be twisted to the needs of a group.