In this excerpt from a new graphic novel, a young protester goes missing after a mass demonstration in the aftermath of Iran's 2009 elections.
By Amir and Khalil | September 15, 2011 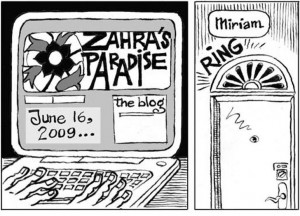 So, a Persian writer, an Arab artist and a Jewish editor walk into a room…

Sounds like the beginning of a bad joke. Actually, that’s something like the start of this unusual editorial adventure, the first of its kind. Zahra’s Paradise was written a few weeks after the 2009 Iranian elections by Amir, an Iranian activist residing in the United States and made into a graphic novel by Khalil, an artist also based in the United States. Zahra’s Paradise was first serialized as a web comic at www.zahrasparadise.com.

Set in the aftermath of the elections of 2009, Zahra’s Paradise is the fictional story of the search for Mehdi, a young protestor who has disappeared in the Islamic Republic’s gulags. Mehdi has vanished in an extrajudicial twilight zone where habeas corpus is suspended. What stops his memory from being obliterated is not the law. It is the grit and guts of a mother who refuses to surrender her son to fate and the tenacity of a brother—a blogger—who fuses culture and technology to explore and explode absence: the void in which Mehdi has vanished. Zahra’s Paradise weaves together a composite of real people and events. As the world witnessed what could no longer be kept from view, through YouTube videos, on Twitter and in blogs, so this story came to be and had to be told.

Zahra’s Paradise’s second chapter, “Aftermath,” begins the evening after one of the giant demonstrations that immediately followed the announcement of the official results of Iran’s disputed presidential elections in Tehran.

Amir and KhalilThe author Amir is an Iranian-American human rights activist, journalist and documentary filmmaker. He has lived and worked in the United States, Canada, Europe, and Afghanistan. His essays and articles have appeared far and wide in the press. Khalil’s work as a fine artist has been much praised. He sculpts and creates ceramics and has been cartooning since he was very young. Zahra’s Paradise is his first graphic novel. The authors, both contributors to Foreign Policy In Focus, have chosen anonymity for obvious political reasons.