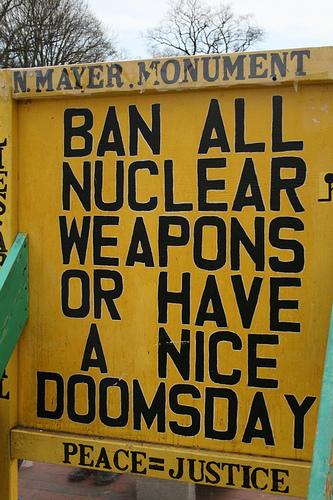 Zoning Out Nukes in the Middle East

From Iran to Israel, there's only one real solution to nuclear proliferation in the Middle East.
By Kevin Martin | May 20, 2011 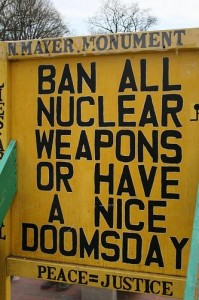 Although the headlines coming out of the Middle East are about revolutions and repressions, nuclear weapons remain a key problem in the region. The nuclear issue that has gotten the most attention has been Iran’s nuclear program.

Iran shouldn’t have nuclear weapons any more than the current nuclear weapons states should. But military threats against Iran’s nuclear sites should be abandoned for a host of reasons (starting yet another war in the Middle East and killing more innocent civilians and further disrupting the world economy, just for starters).

However, Israel and the United States have consistently left open the threat of military action against Iran to stop its alleged pursuit of a nuclear weapons capacity. But if deterrence theory applies,

Israel’s nuclear arsenal of at least 200 weapons, not to mention the much larger U.S. arsenal, should dissuade Iran from launching any nuclear attacks of its own.

The only reason that deterrence theory might not apply is that Iran’s ruling mullahs are somehow irrational and therefore can’t be deterred like the “rational” rulers of other countries. That’s just plain wrong. They, along with other allegedly “crazy” regimes such as those in Libya, Burma, and North Korea) act rationally to maintain their power. We may not like the decisions they make, but they are quite rational actors of self-preservation.

The point is not to somehow shore up deterrence theory but to make it obsolete by pursuing the global elimination of nuclear weapons. In the Middle East context, a 2012 conference will be under the auspices of the Nuclear Non-Proliferation Treaty to establish a Weapons of Mass Destruction-Free Zone in the region (similar zones are already in force in Latin America and the Caribbean, Africa, Central Asia, Southeast Asia, the South Pacific and Antarctica). South and Southwest Asia are the only portions of the Global South not currently part of a NWFZ.

Perhaps ironically given the current situation and the fact its nuclear program at the time was receiving U.S. assistance, Iran was the first country to call for a Middle East Nuclear Weapons-Free Zone in 1974. It still advocates for one, as do all the other countries in the region except Israel. But Israel’s position is not entirely fixed. In September 2009, Israel supported an International Atomic Energy Agency resolution calling for such a zone. And rumors have arisen that Israel might participate in the conference, if only not to be seen as obstructionist. A WMD-Free Zone would surely benefit Israel, as it doesn’t want to see a nuclear arms buildup in the region.

The problem of nuclear weapons in the Middle East extends beyond just Israel and Iran. Turkey, Saudi Arabia, Egypt, Syria, the United Arab Emirates, and perhaps other countries in the region could go nuclear as well. A Weapons of Mass Destruction-Free Zone, which appears unrealistic given Israel’s refusal to even officially acknowledge its nuclear arsenal and the U.S. support for this stance, would be much better than an unfettered nuclear arms race in the region. The new, more democratic governments that emerge from the current Arab Spring, to the extent that they are more transparent and accountable to their citizens than their predecessors, could help to address the challenging regional security issues.

Washington and the Zone

It’s unlikely that the United States, in a presidential election year, will engage the issue of a Nuclear Weapons Free Zone in the Middle East in a frank manner. Indeed, the United States might set low expectations or provide leadership in convening the conference only to protect Israel. Still, international civil society groups and peace activists, including many from the region, are working to mobilize public support — either at the official conference or at a separate meeting — for establishing such a zone.

As the relative decline of U.S. power and the rise of other regional powers continue to shape a more multi-polar world, the United States and Israel cannot expect to continue to ignore the other countries in the region — and not just on this issue. The Nuclear Non-Proliferation Treaty and regional security mechanisms must be strengthened, but not merely on U.S. and Israeli terms, as is now the case.

The establishment of a WMD-Free Zone in the Middle East might have ripple effects for regional peace. The zone could provide a regional security confidence boost for Israel via increased transparency (and perhaps a decreased sense of isolation on Israel’s part). It would also bolster the effort to abolish nuclear weapons worldwide. This month, the Obama administration submitted two protocols establishing similar zones in Africa and the South Pacific to the Senate. Now it’s time to turn to the Middle East, where a WMD-Free Zone could help avert awful alternatives — a potential Israel-Iran conflict, a regional arms race, or a catastrophic world war.

Kevin MartinKevin Martin is executive director of Peace Action and a contributor to Foreign Policy In Focus. Founded in 1957, Peace Action (formerly SANE/Freeze) is the largest U.S. peace and disarmament organization.