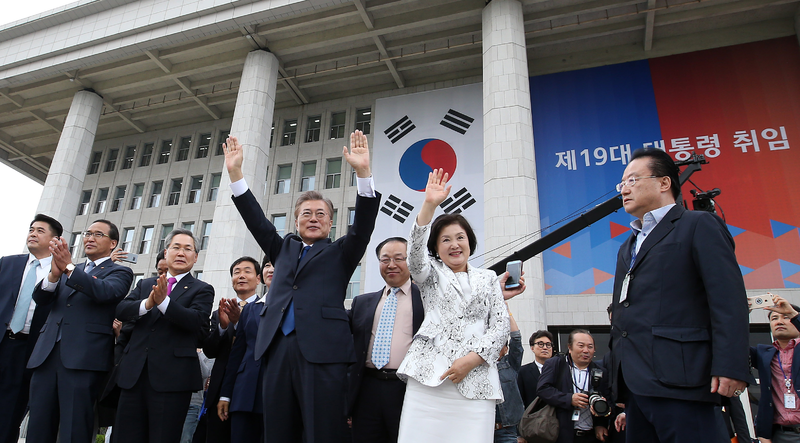 Korea's new pro-engagement president may not have to be as deferential to Washington hardliners as his predecessors.
By Christine Ahn | June 29, 2017

The Trump administration will undoubtedly try to steer Moon in the opposite direction, towards “maximum pressure” on North Korea. However, while the United States may have heavily influenced South Korea’s economy and politics for the last 70 years, including still maintaining wartime operational control over its military, it’s a new day.

Not only did Moon win the May 9 election in a landslide victory with the largest margin and greatest number of South Koreans voting in history, he has maintained his enormous popularity with approval ratings at 80 percent. At a forum in Seoul, former U.S. ambassador Kathleen Stevens urged Moon not to mention this when he meets Trump, whose approval ratings stand at 36 percent.

Moon swept into office after millions of South Koreans took to the streets and staged candlelight vigils for months to demand the ouster of former President Park Geun-hye, a conservative who was impeached by the National Assembly on charges of corruption. On the even of his election, the progressive Moon told the veteran journalist Tim Shorrock that his election completes the Candlelight Revolution.

Unlike other parts of the world, democracy is alive and well in South Korea, and the public are wildly supportive of Moon and his pro-engagement policies. According to a just released South Korean poll, 80 percent of South Koreans want inter-Korean dialogue with North Koreans. While the overwhelming majority of South Korean people and their president may be aligned in this wish, their efforts for reviving the “sunshine policy” — that is, a posture of engagement toward the north — will be hamstrung by Washington’s hardline policy and UN Security Council sanctions.

But Moon should be reminded of the international community’s abhorrence of Donald Trump. After all, Trump’s inauguration was welcomed by the historic women’s march, where 5 million women in 673 cities worldwide took to the streets to protest his incoming presidency, in fact the largest protests in U.S. history. From Germany’s Angela Merkel to France’s Emmanuel Macron, Trump has angered many historic U.S. allies. Moon doesn’t have to try to please Washington the way his predecessors have.

South Korea is the 11th largest economy in the world and among the top 10 militaries. If South Koreans say they are open to halting joint military exercises with the United States, as was floated last week by Moon Chung-in, a special presidential adviser, Washington should listen.

But it’s not just the South Korean people and its leaders that the Trump administration should hear from.

According to a May Economist/YouGov poll, 60 percent of Americans, regardless of political affiliation, support direct negotiations between Washington and Pyongyang. On the day of the Moon-Trump summit, nearly a dozen national civic organizations, including Win Without War and Credo, will deliver a petition to Moon signed by more than 100,000 Americans offering strong support for his commitment to diplomacy with North Korea.

ALso this week, a bipartisan group of six prominent former U.S. government officials sent a letter to President Trump urging talks immediately with North Korea. “Pyongyang has shown it can make progress on missile and nuclear technology despite its isolation,” they warned. “Without a diplomatic effort to stop its progress, there is little doubt that it will develop a long-range missile capable of carrying a nuclear warhead to the United States.”

This builds on a letter to Trump signed last month by 64 congressional Democrats urging direct talks with North Korea to avert an “unimaginable conflict.” The letter was co-led by John Conyers, the last Democrat who served in the Korean War. “As someone who has watched this conflict evolve since I was sent to Korea as a young Army Lieutenant,” Conyers said, “it is a reckless, inexperienced move to threaten military action that could end in devastation instead of pursuing vigorous diplomacy.”

The American and South Korean people want peace. Hopefully an outcome of the Moon-Trump summit will be that diplomacy prevails, not war.

Foreign Policy In Focus columnist Christine Ahn is the international coordinator of Women Cross DMZ, a movement of women mobilizing globally for peace in Korea, and co-chair of the Korea Peace Network.